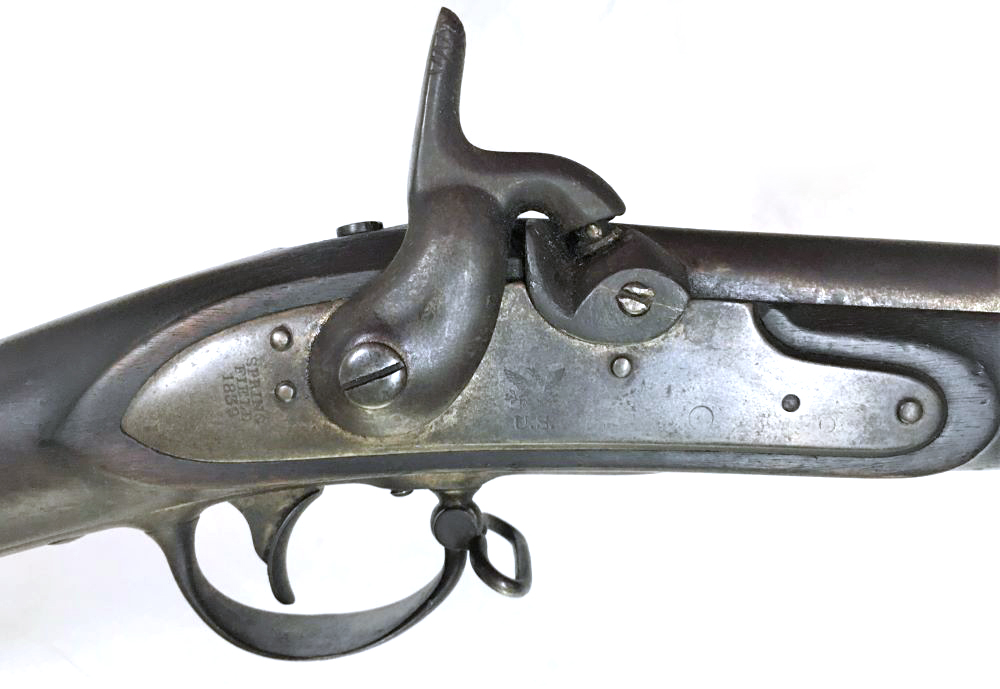 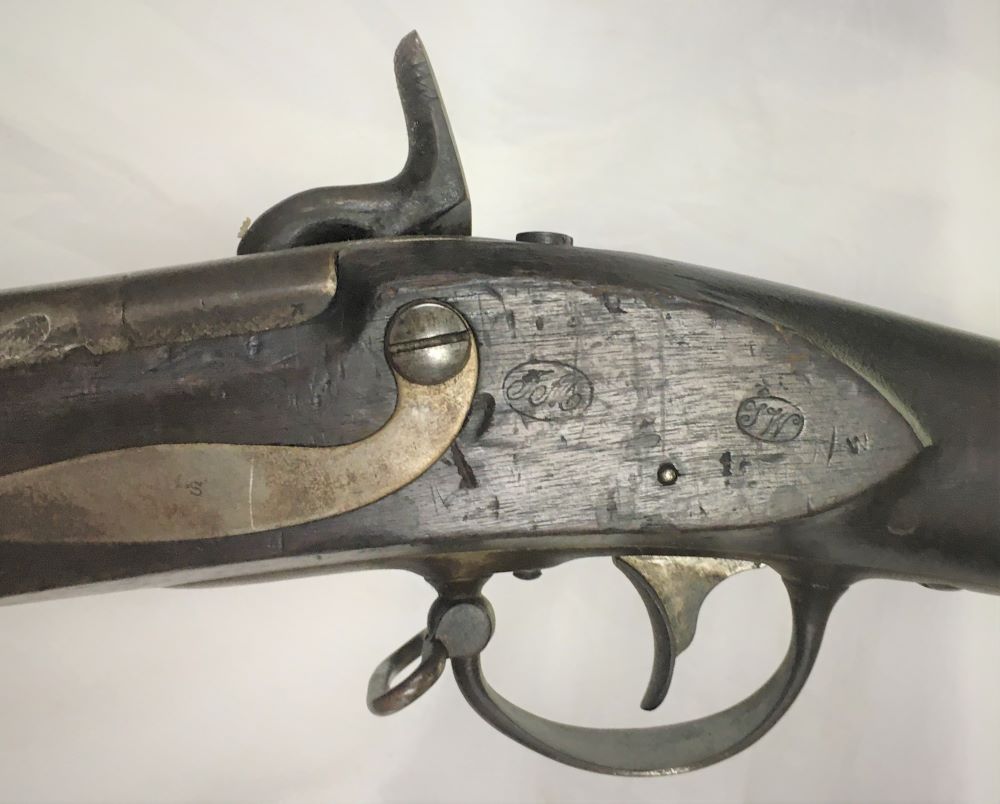 210701  A very solid and handsome percussion conversion of the Springfield Model 1816 flintlock musket.  Overall  VG condition.  100% original, 100% complete, and mechanically perfect.  Metal is smooth age brown patina.  The stock has the look of a fine piece of antique furniture.  The percussion conversion is one of the patent breech types where the entire back end of the barrel was cut off and a full percussion breech of new manufacture was threaded and installed.  All markings are crisp and legible including the cartouches on the stock.   Used by both North and South.  A very solid and attractive .69 caliber US musket.  $850.00 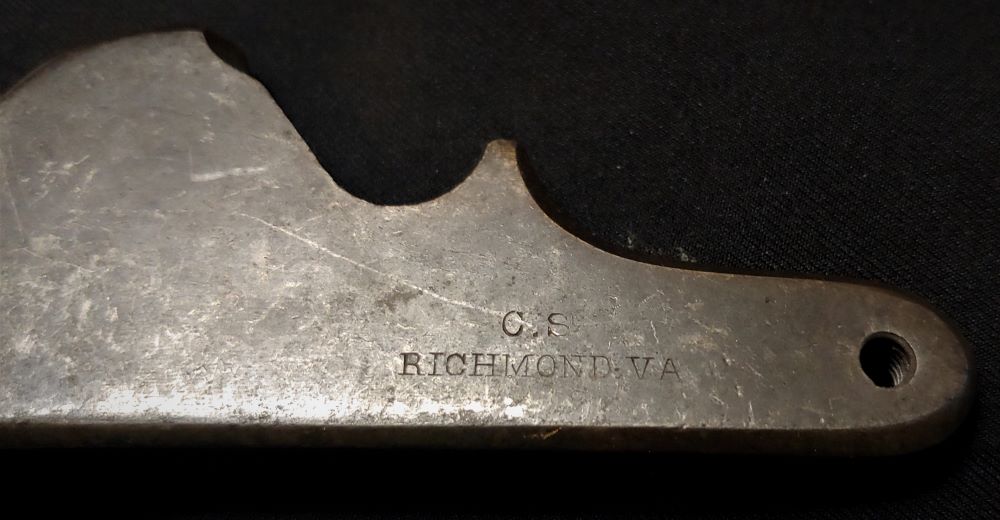 This is a scarce 1862-dated low-hump lock made for the Richmond rifle musket between March and September of that year.  In March the lock milling machinery was altered to reduce the height of the early “High Hump” plates.  The arsenal milled the top edge and and added a second cut, following the curve of the cone, to make capping easier.    In April 1861 Virginia troops had captured the machinery for making the Model 1855 Rifle Musket at the Harpers Ferry Armory.  It was delivered at the state arsenal in Richmond, and was put into use by the Confederate States in July. Richmond produced a version of the Model 1855 – 1861 that eliminated the Maynard tape priming system, but kept the same humped profile on the lock plate, producing early “high-hump” plates in 1861 and early 1862.  The high hump contour made capping the cones difficult and awkward.  Lowering the hump in March of 1862 fixed that problem.  We know this plate was produced between March 1862 and September 1862, because in September a new die for striking the date was made which produced a numeral 2 with the top loop nearly completely closed.   This plate has the bridle, tumbler and sear spring in place and is nicely marked 1862 at the rear of the plate and C.S. / RICHMOND, V.A. forward. The condition is excellent. If you are restoring a Richmond rifle musket, you will have to look long and hard to find another.  The 1863 and 1864 surplus plates sold by Bannerman are generally priced higher than this fine early war lock.  $1,950.00 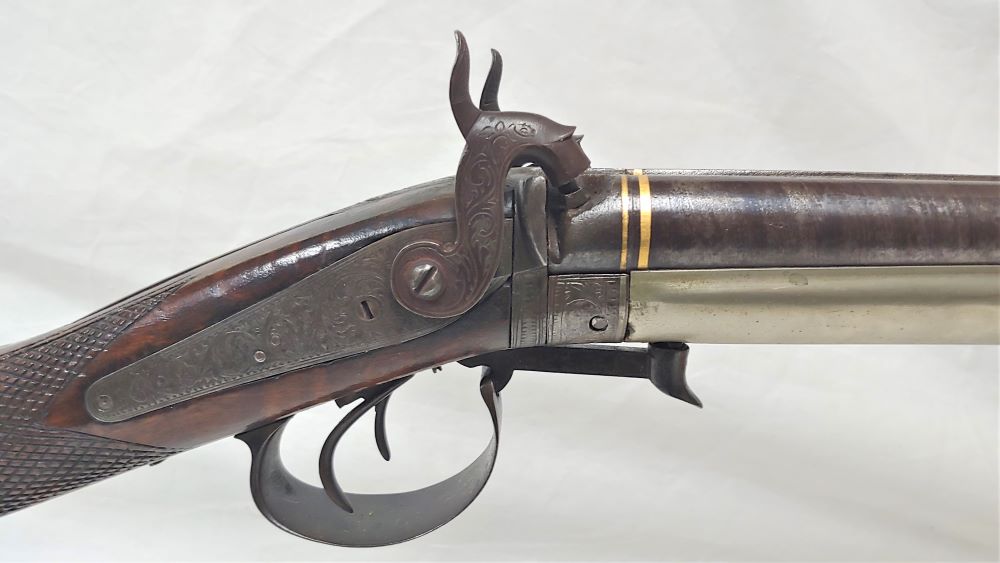 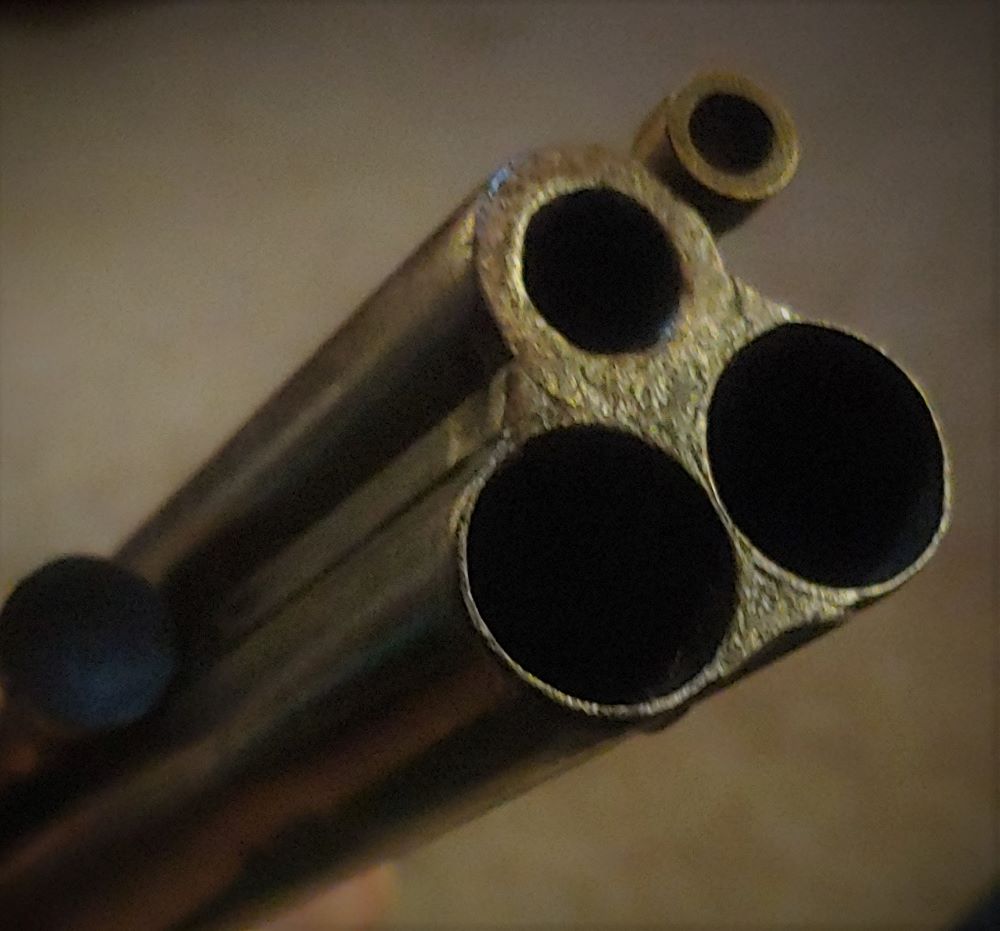 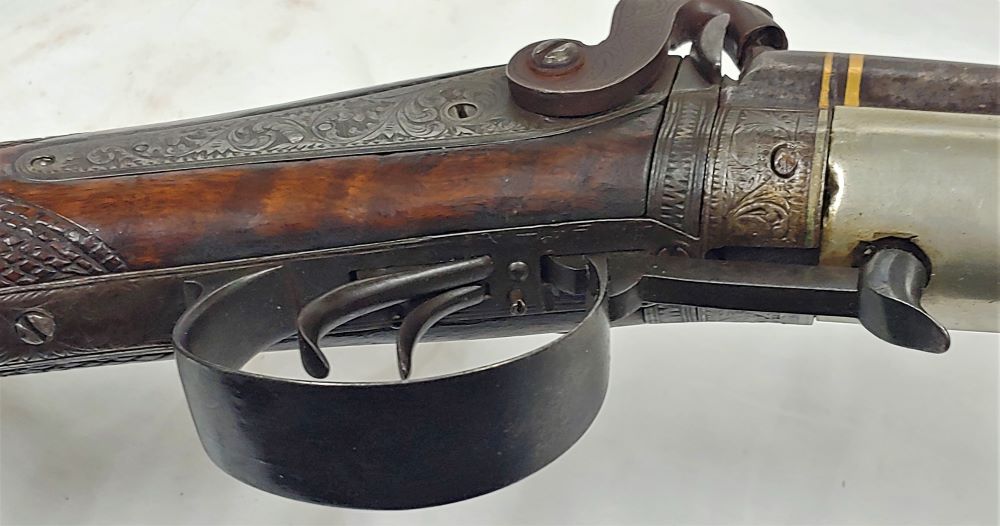 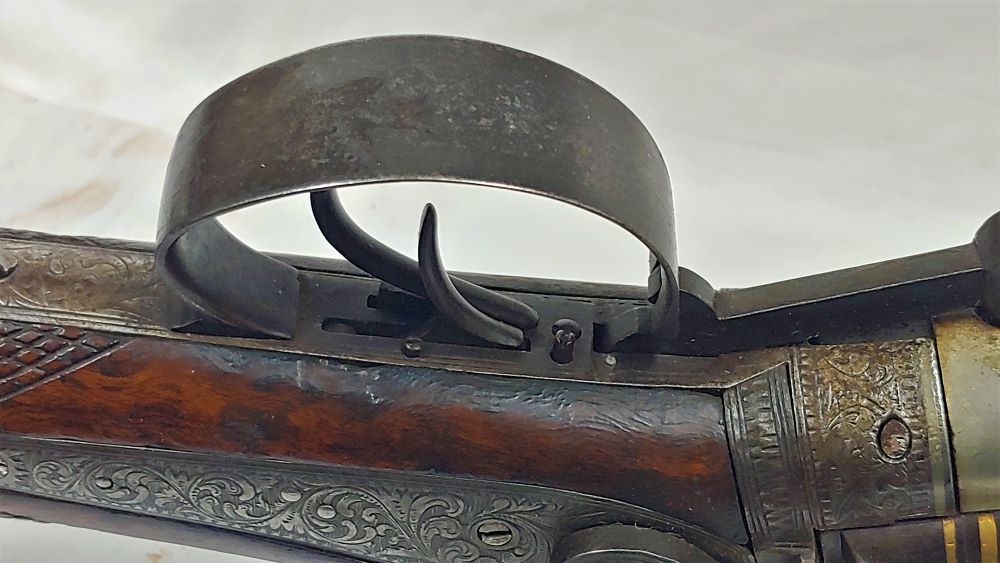 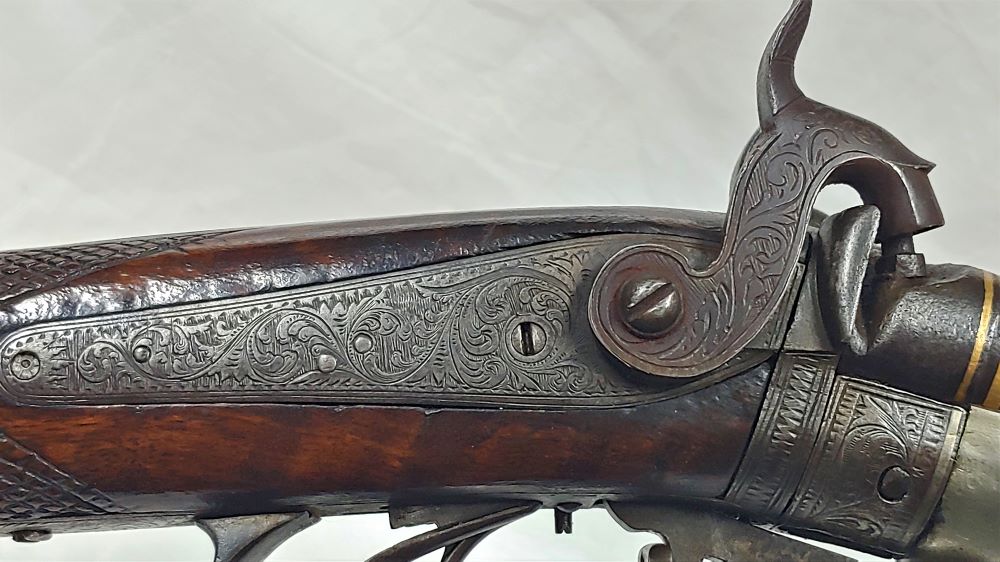 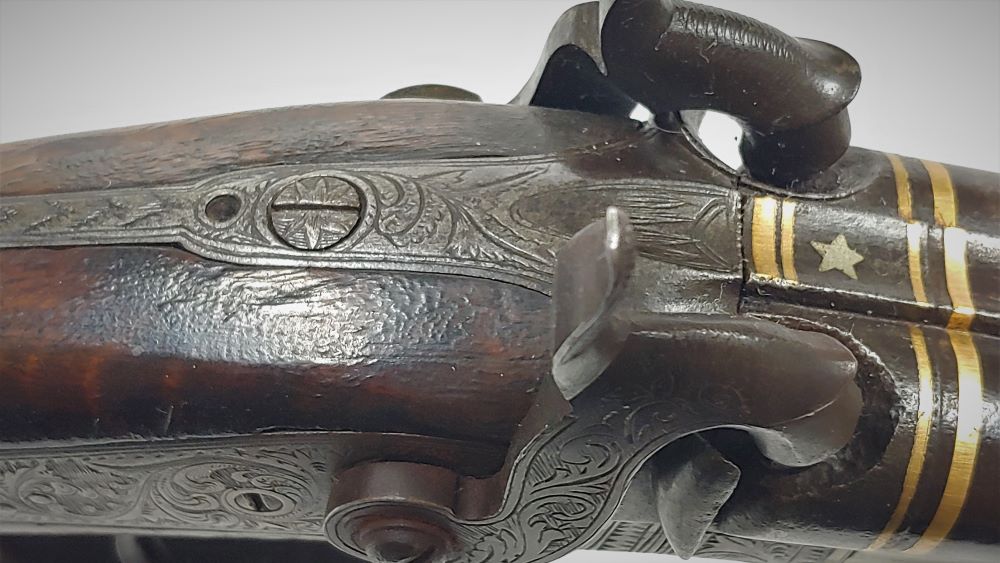 21 07 03    This is a beautiful American made Drilling (3 barrel shoulder weapon consisting of a double barrel shotgun superposed over a rifle barrel) of exceptional quality.  Signed on the barrel rib by maker Henry C. Steephens in Paterson New Jersey.   Steephens was born in NY in 1814, began producing guns of English quality in Paterson, New Jersey at an unknown date, and then moved to Savannah, Georgia around 1851 where he continued business during the Civil War and into the 1880s.  He shows up in US census records but his whereabouts in the 1820s and 1830s is not clear.  My hypothesis is that he went to England and trained as a gun maker during that period.  This drilling looks to be English in every aspect except for the silver inlaid star at the breech, the arrow shaped rear sight,  and the maker’s name and town on the barrel rib.  The classic English form tells me Steephens trained in England or Scotland or Ireland, and learned his craft well.

The weapon sports two back action locks for the upper shotgun barrels, and an under-hammer lock for the rifle barrel on the bottom.  The butt stock is wonderful showing very attractive grain, fine checkering at the wrist, and good color.  The fore end is crafted from metal which I take to be German silver.    The shotgun barrels are gold banded at the breech, and a silver five pointed star is inset between them.  The triggers are finely crafted with the rifle trigger also being a “set trigger”.   ie  … a screw adjustable mechanism that adjusts how much “trigger pull”  is required to fire.    The metal parts are profusely and beautifully hand engraved.  The tang has a provision for a lollipop sight. 48 inches overall length.  32 inch barrels.  20 Gauge over .44 cal.

This gun maker was working in Paterson, New Jersey during or near the same time Sam Colt was making his Paterson revolvers there.  I would wager the two men knew each other.  If you have access to Paterson New Jersey newspapers that would be an interesting research project.  Everyone is gaga over Paterson Colts… this Patterson Drilling is rarer, better made, and costs 100 times less money!  A whole lot of bang for your buck. $2,750.00 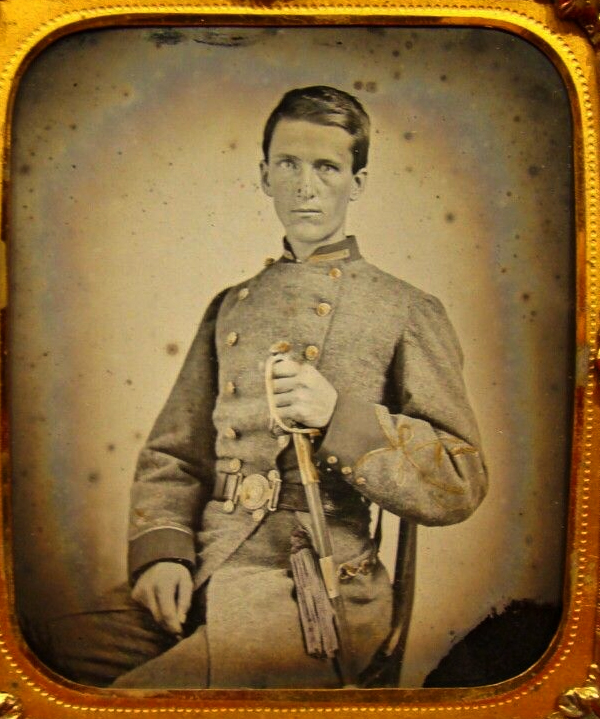 ..      OFFICER IMAGE IS FOR ILLUSTRATION PURPOSES ONLY. NOT AVAILABLE FOR 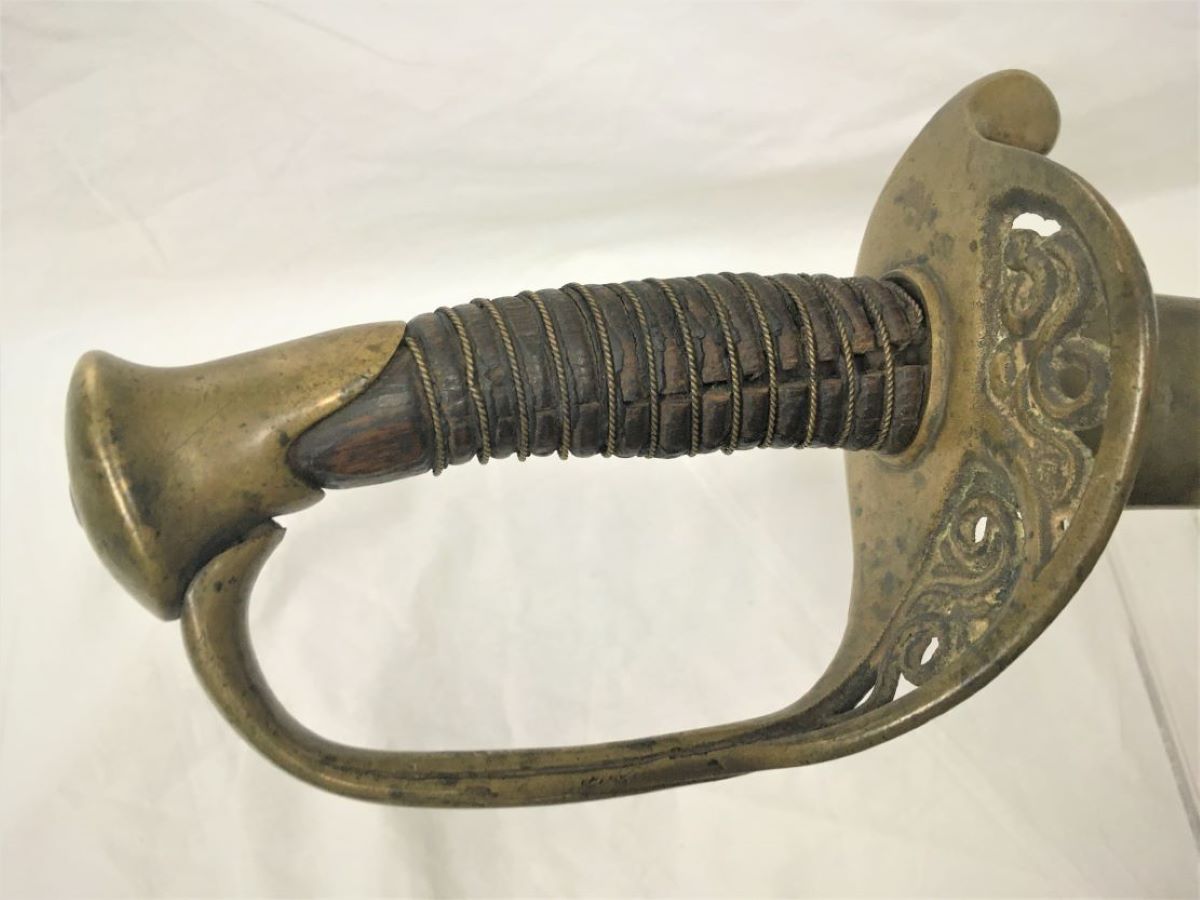 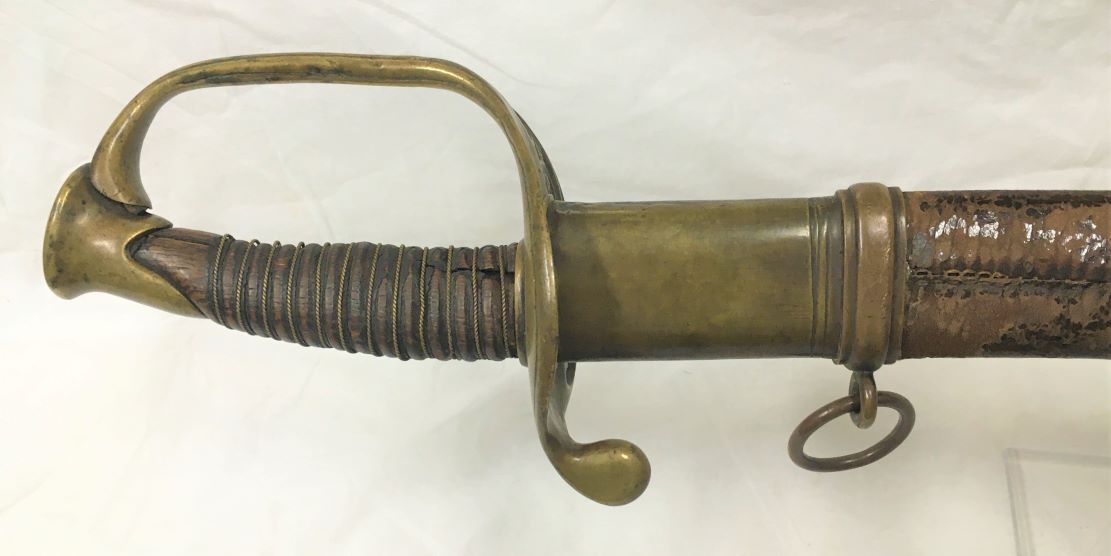 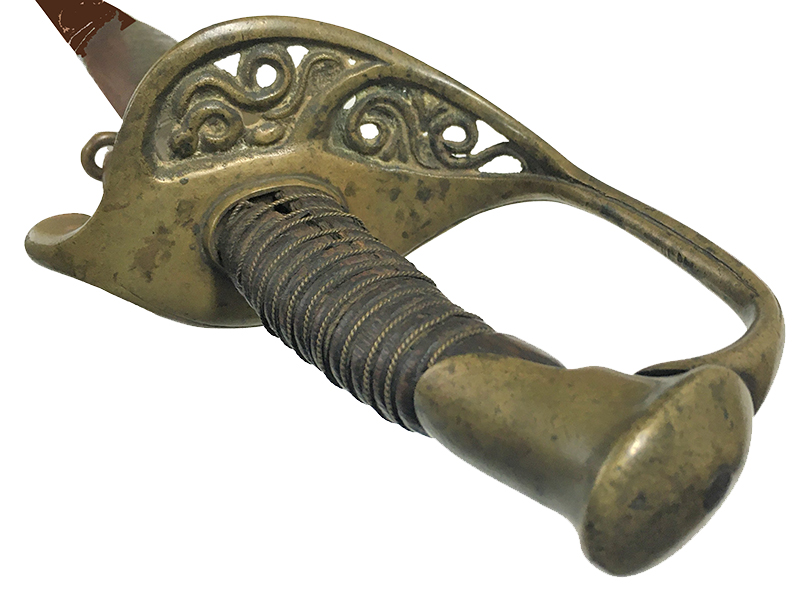 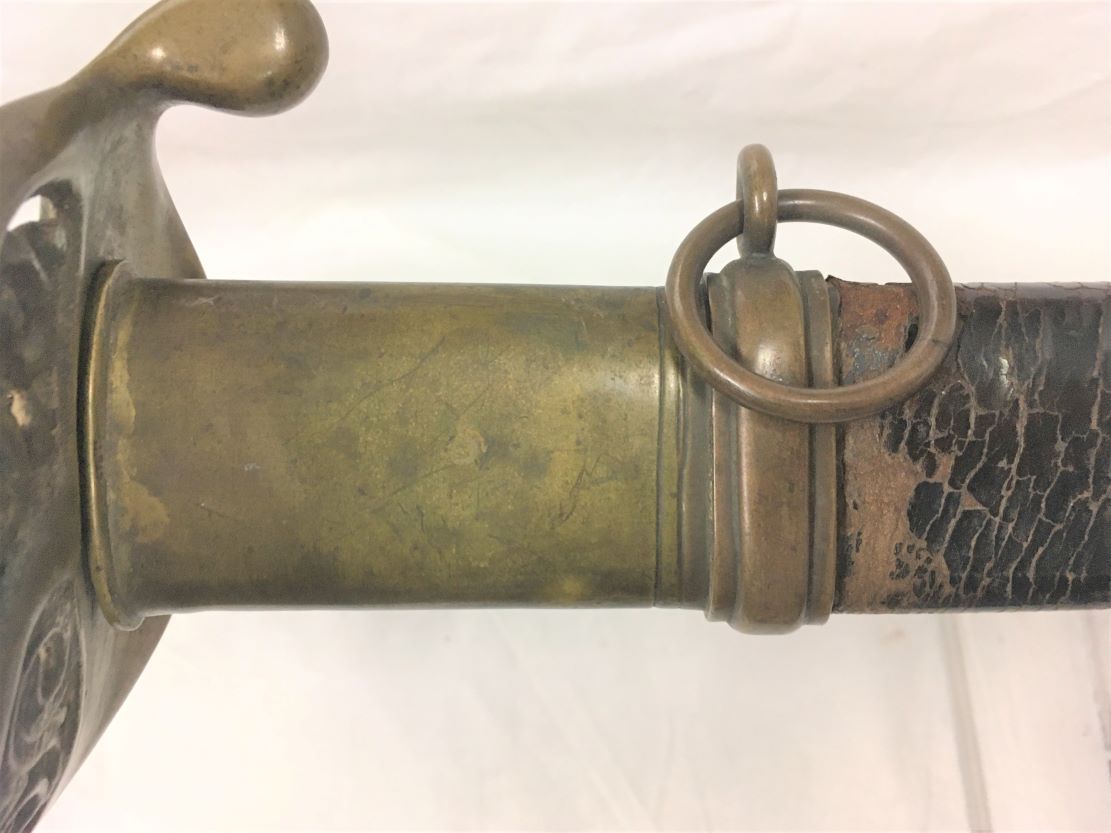 This is a very scarce Confederate foot officer’s sword with its orginal scabbard by A.H. Dewitt of Columbus, GA.     Dewitt revived the old Revolutionary War snake icon warning to oppressors…   coiled rattlesnakes are cast into the brass guard, in lieu of the usual open-work floral motifs on US and CS foot officer’s swords.   The sword overall has an appealing untouched, as-found, look and patina. The pommel is typically southern, as is the globular quillon finial.  The leather wrap is worn from the grip, the brass binding wire is present.  The wood has an age crack on the obverse, but is solid, stable and has a nice patina.  The 30-1/2″ blade is just over 1-1/8″ wide,  at the ricasso and has an unstopped fuller. The metal is mottled gray overall with areas of darker gray staining, but only scattered freckling down to the last 5 inches, which shows darker and with some pitting, indicating that portion of the scabbard, with the drag, was lost fairly early, leaving that portion of the blade exposed. About 22 ¾ inches of the scabbard now remains (missing about 9 inches) including the Confederate-made upper and middle mounts with the sling rings. The leather shows wear, crackling to the finish and some loss, but is sturdy. The leather pad is missing from the shoulder of the blade, giving the hilt some play. It matches the scabbard mounts very nicely, with an untouched, aged patina.  This is a very rare pattern CSA sword and the scabbard is unheard of rare.  Aikins Rebel Relics web page has a cleaned example with no scabbard currently offered at $5,000.00   In 2014 James Julia sold one with a complete scabbard for $ 9,775.00.    This is a superb example that my late friend Lee paid 7,500.00 for five years ago.  You can buy this one for $6,500.00 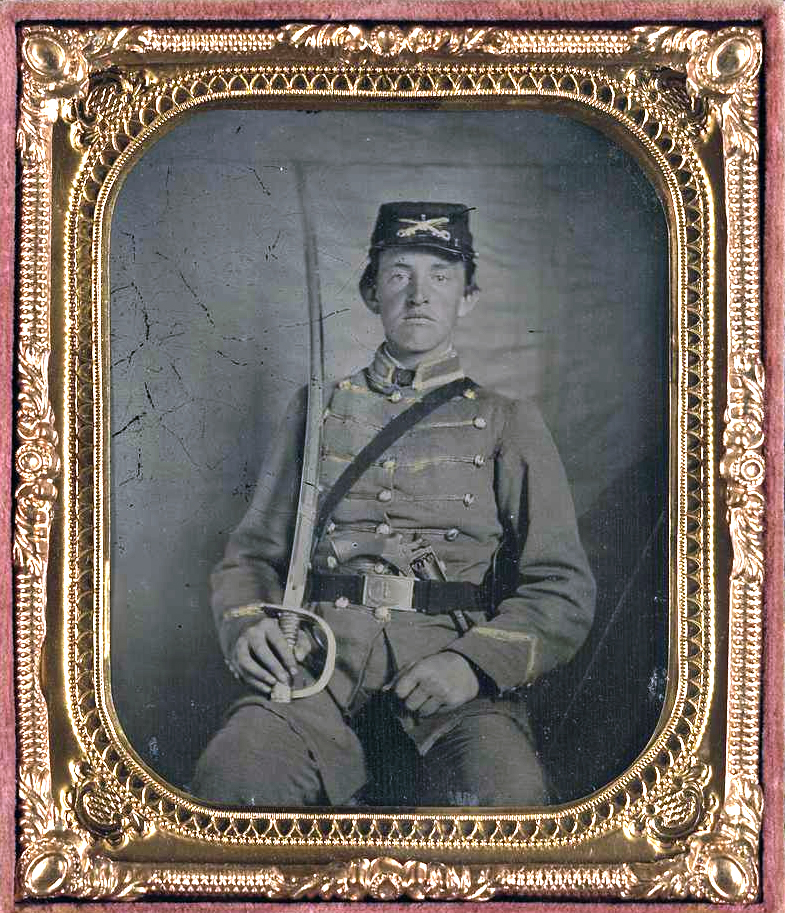 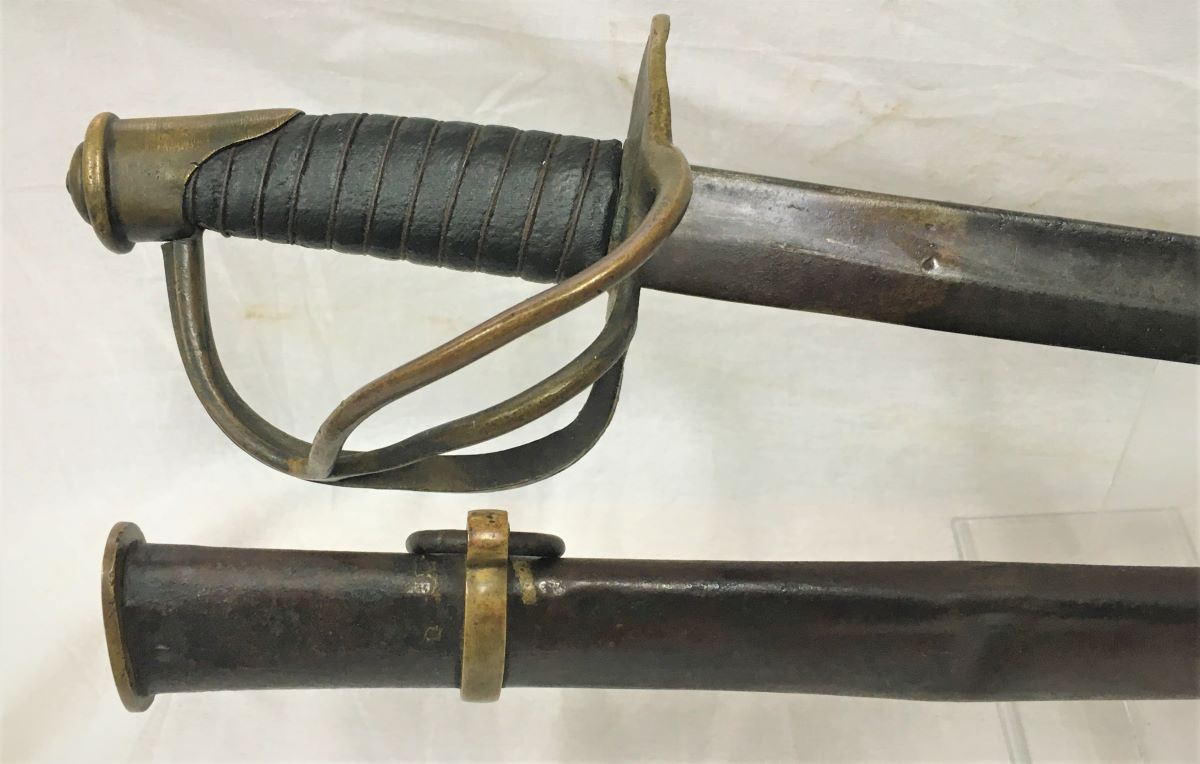 Boyle and Gamble / Frolich Kenansville — Cavalry Saber:  As classic a Confederate cavalry saber as you could hope to find. Hands Down.   No one knows for certain which company made these Johnny Reb swords,  but current wisdom says Boyle & Gamble or Louis Frolich.  The scabbards are identical to early Kenansville scabbards.  The sabers look very much like a Boyle & Gamble Flat-Side saber but have a thin unstopped fuller in the blade.  Over the years I have seen several Boyle and Gamble swords with Frolich style sheaths and scabbards, including a B&G or Douglas officer’s sword in a scabbard virtually identical to the Frolich cut-out CSA staff scabbard.  There is a lot of overlap in styles, features, and manufacturing techniques among the Virginia and North Carolina sword makers. These makers likely used or shared  the same third party outsourced parts suppliers.  This is a top notch Confederate cavalry saber in the original scabbard in wonderful condition. For what it’s worth, I believe it is a product of Boyle & Gamble in Richmond.   A search of the internet shows that Heritage Auctions sold one for $11,950 in June of 2007,   and so called Old South Antiques has one currently on its page priced at $9,900.00.  These values are ludicrous.  You an buy this  one for $6,900.00 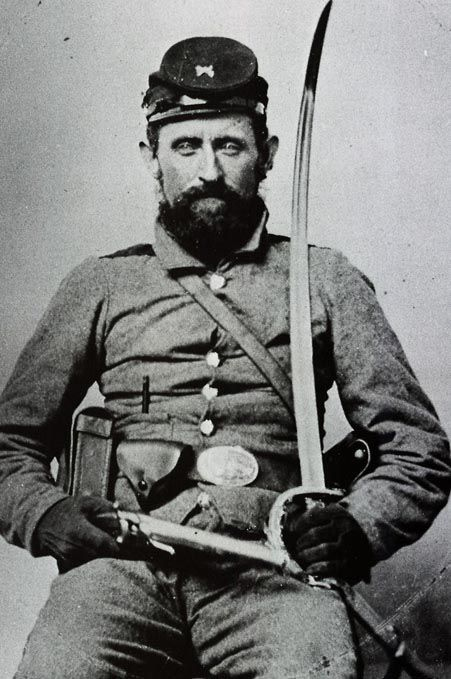 …Soldier images are illustrations only… 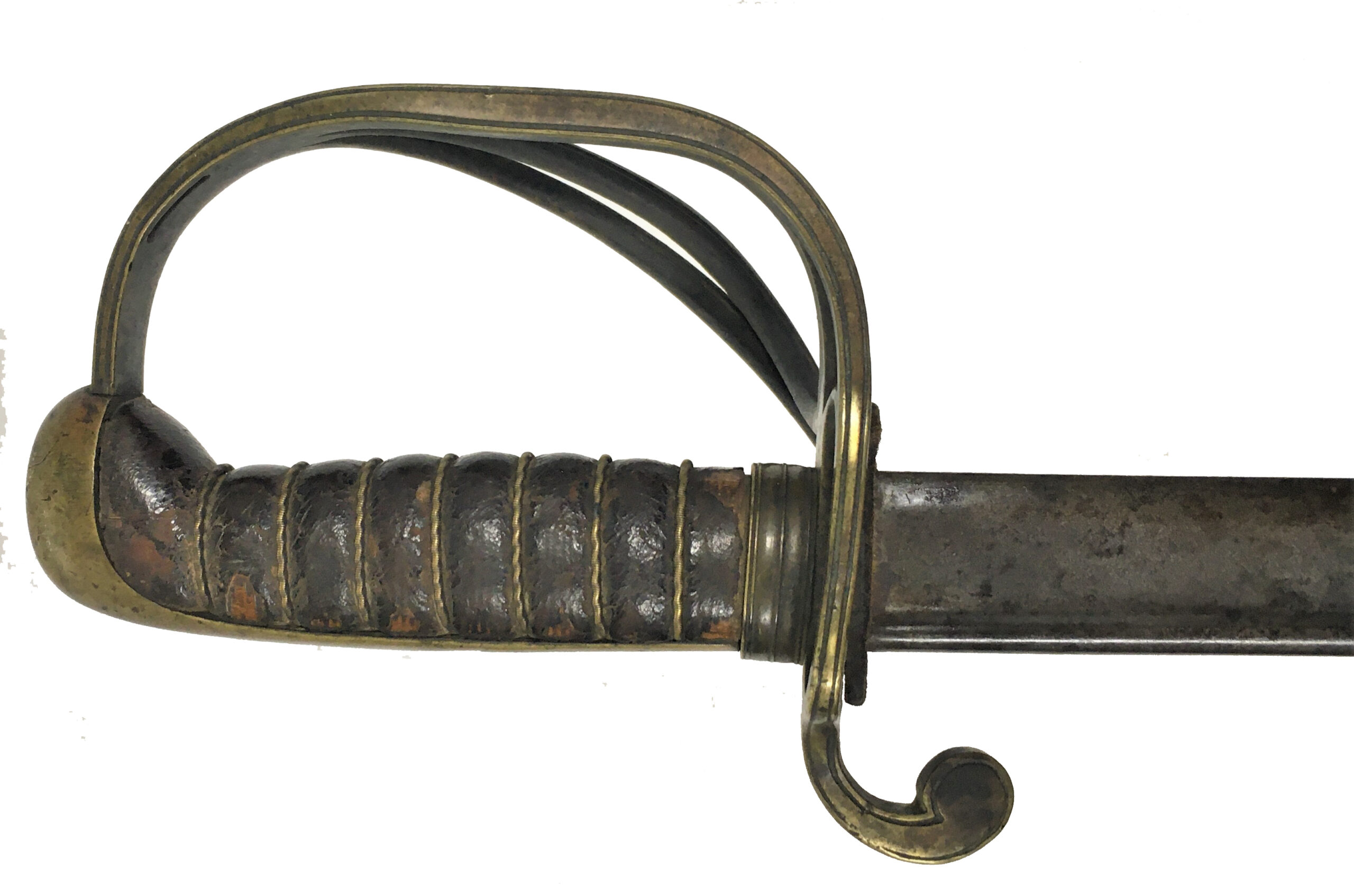 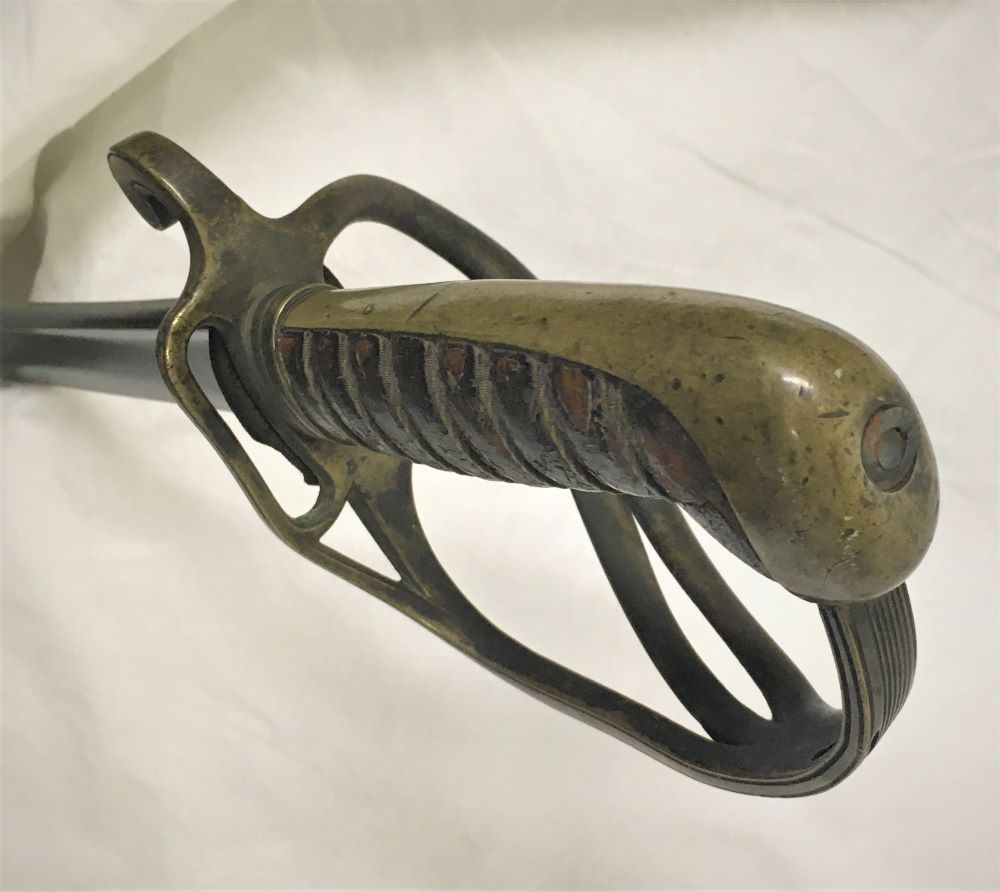 “Rare” gets overused in our business, but seems inadequate for the Ames 1835 contract sabers for South Carolina. Ames even varied the 1833 design slightly for these, using a smooth bird’s-head pommel instead of the stepped form. The grip uses the standard thin brown leather and twisted “dragoon style” binding wire.

As is correct for these sabers, there are no inspector marks. The 34-inch, pipe-back blades were polished bright, and dry-point etched at the ricasso with the Ames address and date and lengthwise on the reverse with “South Carolina” in foliate scipt over a double line with the date “1835” underneath, the whole surrounded by a leafy branch along the bottom that extends up at each end. On this example only pieces of the Ames address are visible, but much of the South Carolina etching, with all of the date, the two lines, and much of the leafy branch can be made out.

This saber obviously saw some antebellum use and was brought into service again during the Civil War. Incredibly, it is housed in a Kraft, Goldschmidt and Kraft brass mounted steel scabbard missing the throat.  The upper two thirds of the scabbard is a smooth brown. The lower third has some thin crustiness and one small hole on the obverse tip near point. The lower leading tip of the drag shows a slight bend, likely having caught on something while in use.

The brass hilt and scabbard mounts have a nice, untouched patina. The leather grip wrap is very good, nice color and surface, with a few rubs showing the wood on the upper obverse, just below the backstrap where one’s finger tips would hold it. The wire is in place, as is the blade pad. The blade shows a mottle gray with a little freckling and some edge sharpening evident around the forte, but only one nick, midway between hilt and point.

This pattern NEVER comes on the market.  I have never seen one change hands at a show.  None of the big auction houses show online records of ever selling one.  And this is the only specimen I’ve ever seen with clear and obvious evidence of Civil War Confederate use.  Heck, if you needed a loose K G & K scabbard you would pay $5000 to $7000 in a heartbeat.

The amazing story behind this one is that it was advertised in an Akron, Ohio auction as a Model 1902 Officer’s Sword.  My late friend Lee attended the sale and bought it for less than $300.  He stopped by my shop on his way home to show me and gloat.  When I told him the scabbard was KG&K he thought I was nuts or just teasing him.  He called later that evening to concur.  $12,500.00