21-03-01  Regulation Union Army tin drinking cup. Four inches tall.  Holds one quart.  Stout tin with large handle secured to the lip of the cup with reinforcing wire loops.  These were $6 when I was 15 years old.  The real deal in excellent condition $265.00   SOLD  SOLD 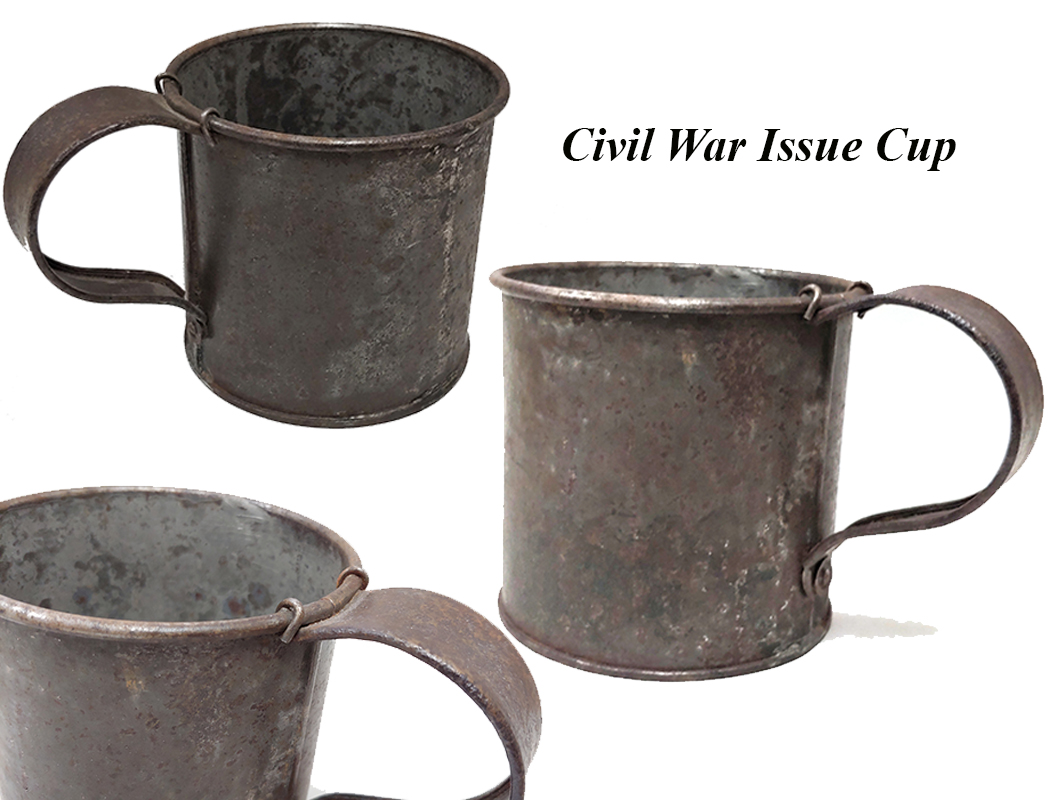 21-03-02  Civil War sergeant’s sword with the double clam shell guard artistically re-worked so that it resembles the wings of a fly.  Full length blade with blunted tip.  Markings about worn away.  Very cool and very affordable.  $155.00  SOLD  SOLD 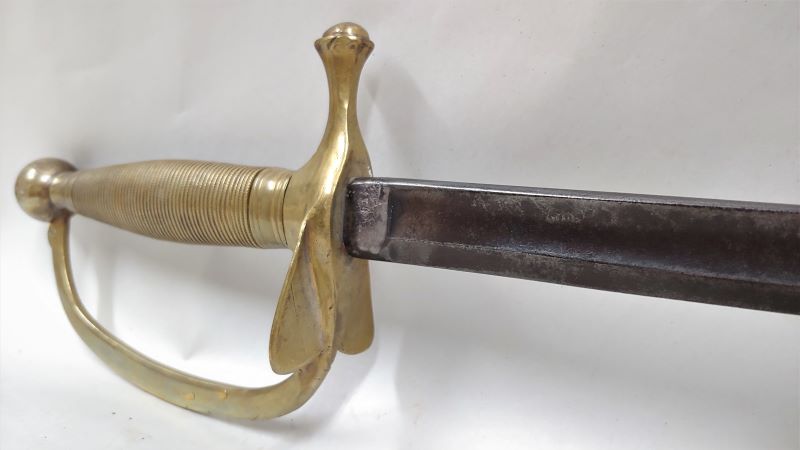 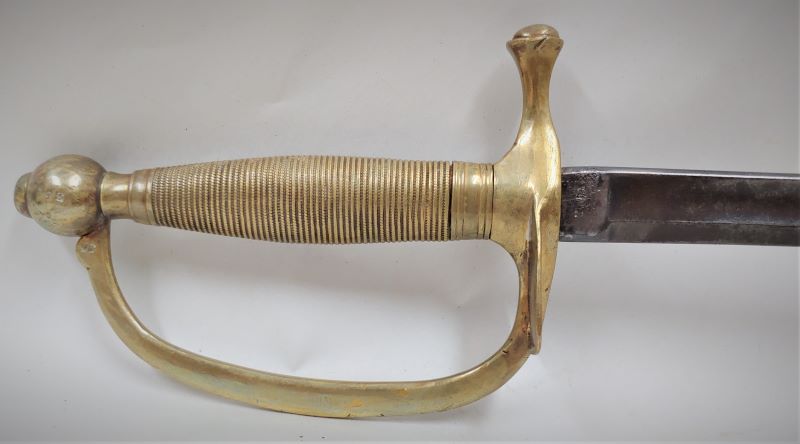 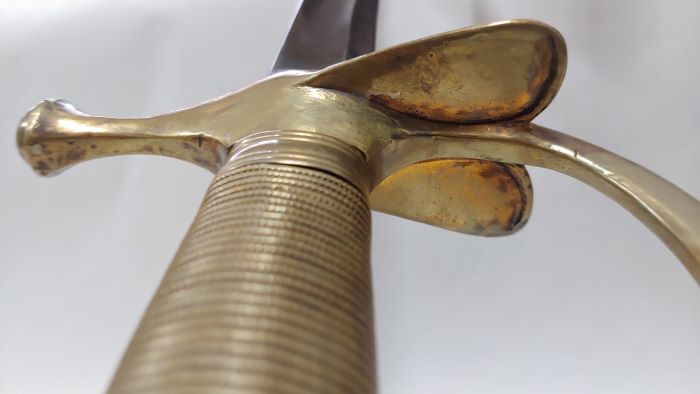 21-03-03   Model 1840 Musicians sword where dad or grandpa shortened the blade to 22 inches,  squeezed the knuckle guard tighter and smaller, and blunted the tip.  VG condition and very solid. Some etching is visible on the blade, as well as the Horstmann dealer marking.  I don’t know if this was shortened in the 1860s or by a later generation.  Either way a very cool old sword… and cheap.  $135.00  SOLD  SOLD 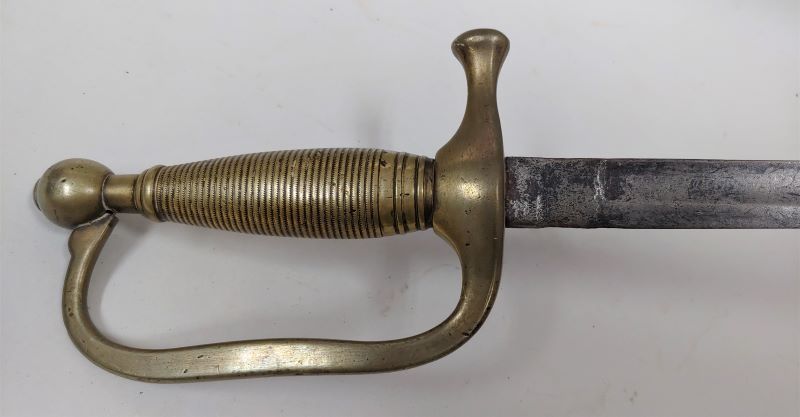 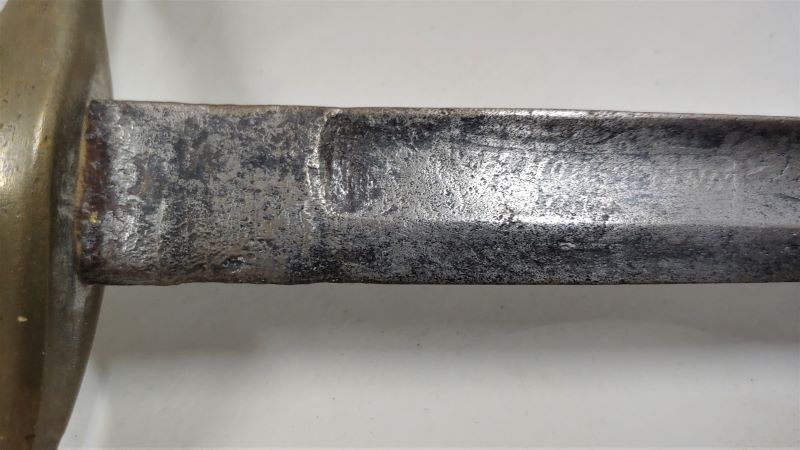 21-03-04   English made, and blockade run, Cavalry saber marked on the spine of the blade with the Confederate export marking of “Isaac & C0.” (representing S. Isaac and Campbell Company)  and stamped on the blade with a large letter “G” which was placed there to indicate shipment to the State of Georgia.  These markings are the rarest markings that can be found on the British Enfield Cavalry Saber.  The Holy Grail of Import sabers.   100% complete with the original scabbard. This is the British Pattern 1853 Enlisted Dragoon Saber, often referred to as an Enfield Cavalry Saber.  Condition is overall VG.  I see my good friends Sam & Wes at Horse Soldier in Gettysburg have a nice one illustrated and described that they sold for $2,950 with a clear Isaac & Co. marking (better than mine) but lacking the Georgia “G”.   Here is an affordable and  dead real Georgia Johnny Reb Cavalry Soldier’s saber.  I am selling this one for a friend,  who is the widow lady of a man who was as good and loyal a friend as I ever had.  (EK)  Priced fairly for everyone $2,250.00  SOLD

21-03-05   Extremely strong condition early war Union Army infantry cartridge box manufactured with no rivet in the front flap, and only two rivets securing the belt loops on the back.  The loop rivets were mandated in 1861, later in the war more rivets were ordered.  The leather is fine russet brown harness leather with virtually all the burnished finish intact.  There is some flaking on the latch tab only.  The box is completely unmarked which indicates it pre-dates  July 1862 when the US Government demanded contractors mark their wares so faulty goods could be attributed to the unworthy maker.  Also interesting is the fact that the front flap is incised for a cartridge box plate, but clearly never had one affixed. Both tin cartridge liners are in place.  Excellent condition with just some minor damage to the stitching securing the right ear on the interior flap.  Early war, very scarce, excellent condition.  1864 cartridge boxes are common.  1861 boxes are quite rare, and especially so when they have never had the US plate affixed.    $375.00  SOLD 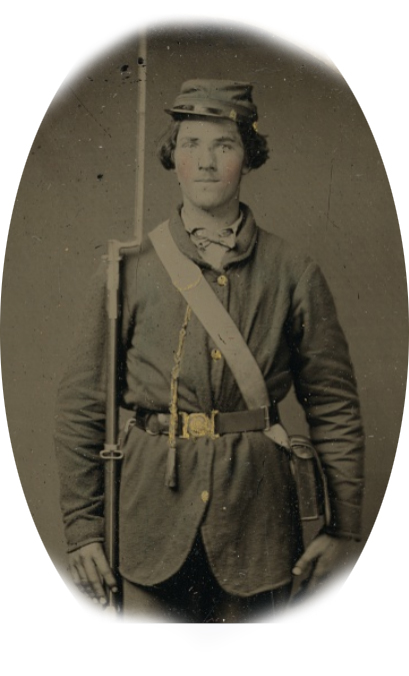 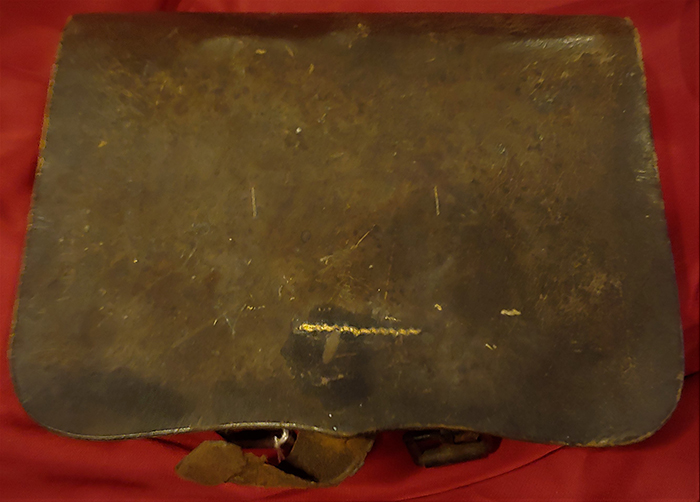 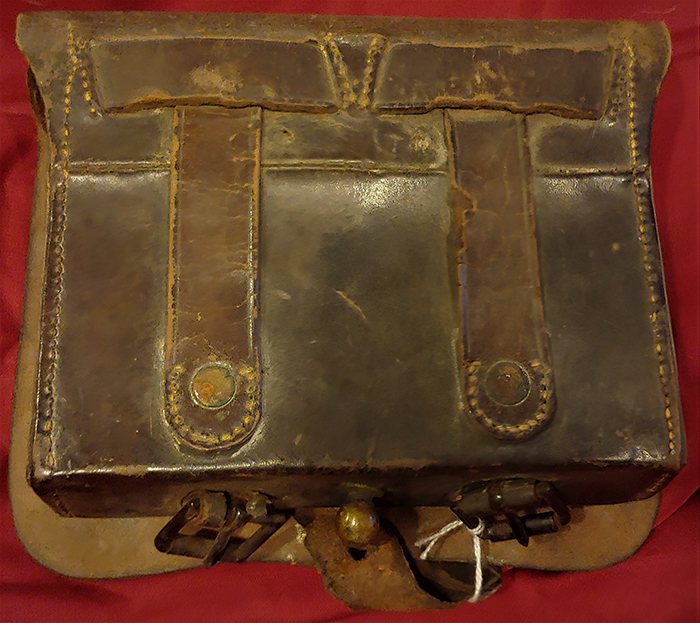 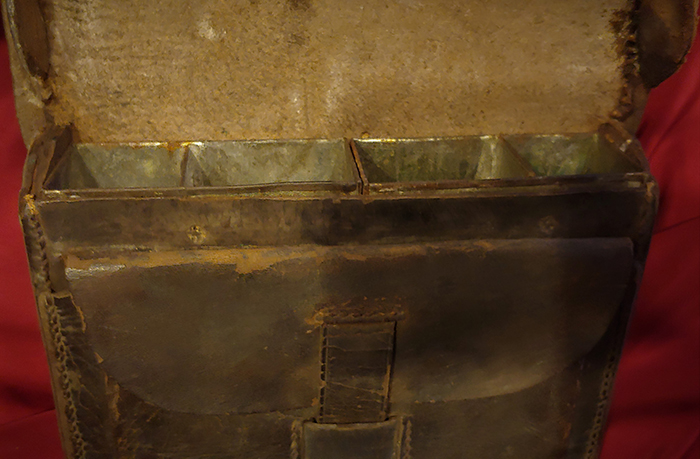 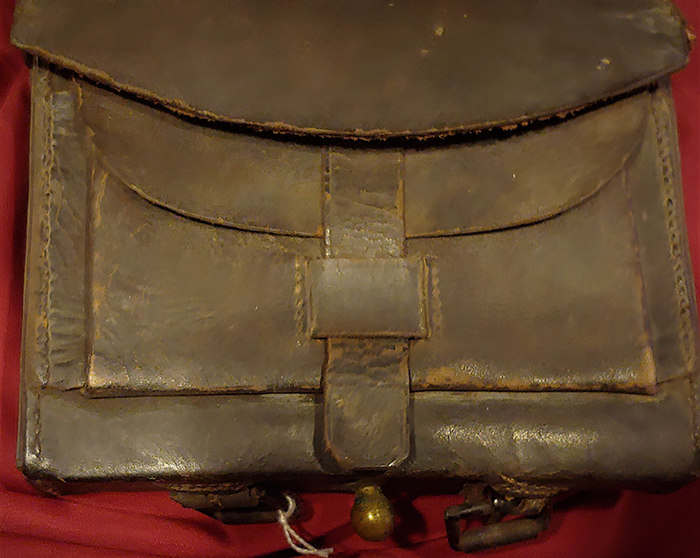 21-03-06   From an ages old relic collection gathered in the 1960s and 1970s come the following COOL dug-up relics.  Enfield musket lock with hammer,  Springfield musket combination tool, Nose-cap from an Austrian Lorenz rifle, and a Springfield musket socket bayonet with a broken blade.  I wish I knew where the relic hunter found these relics…  but I do not.  (So we’ll just say Pickett’s Charge.  Isn’t that where all dug relics come from???)    In the current age it would take you a week to find all these super relics with your metal detector.  Or you can buy them from me at the ultra-fair price of $145.00 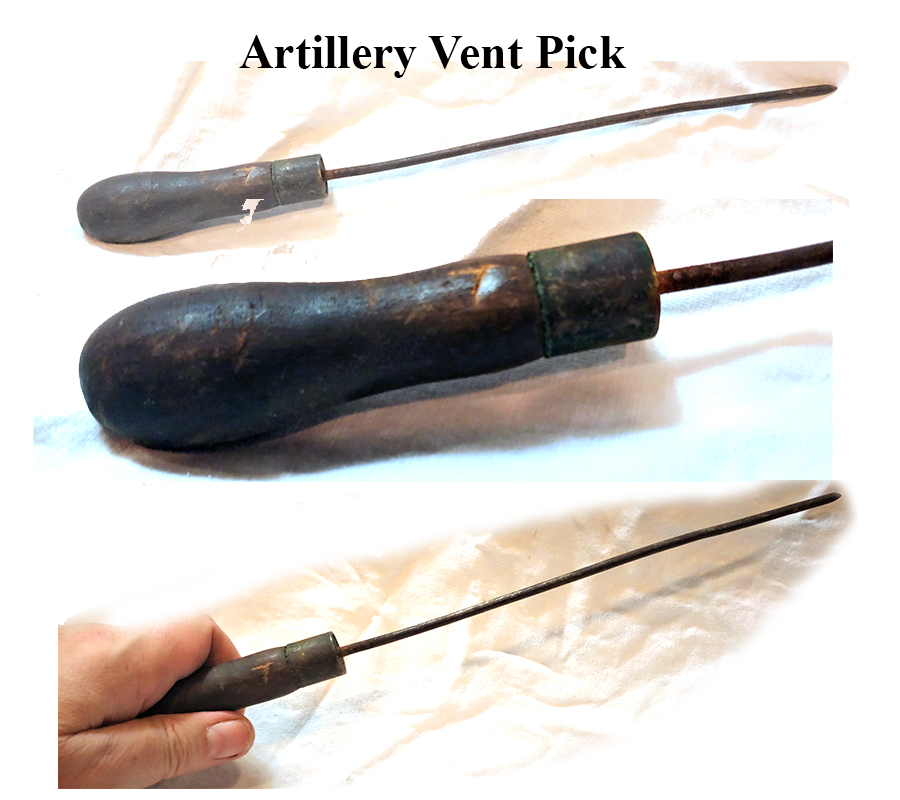 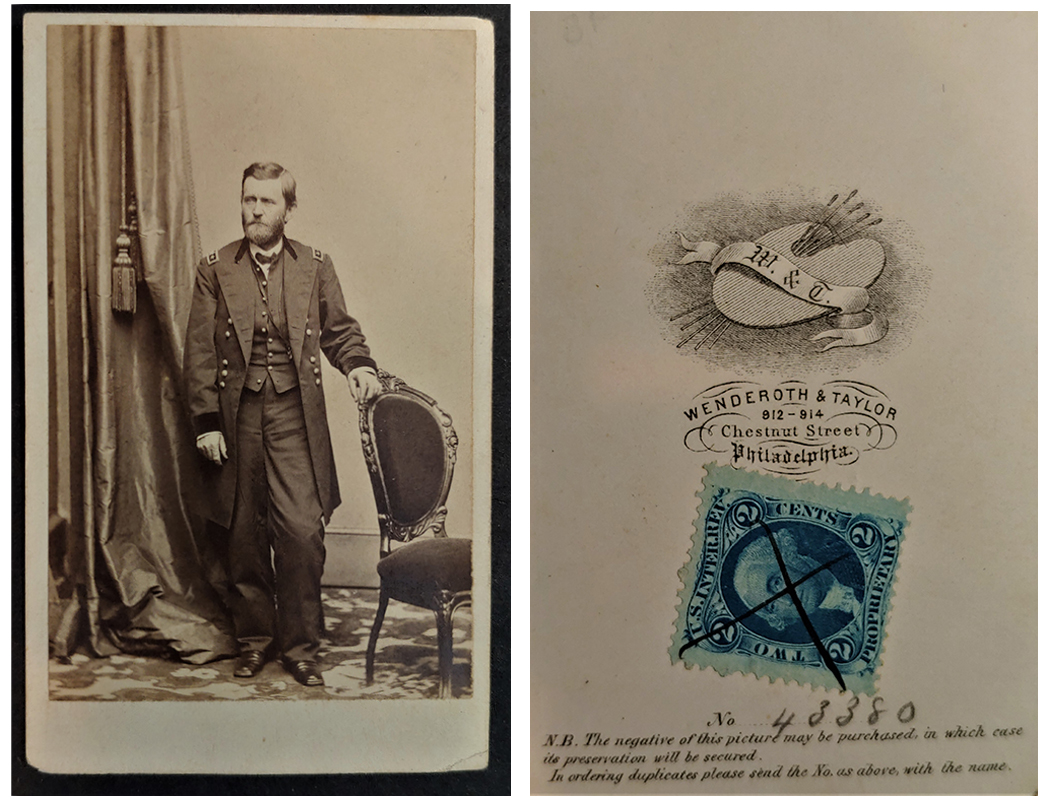 21-03-09  An early war example where the tips of the silver wreath extend above the eagle’s wings.  This style is frequently found on the early war artillery short sword belts, but is also found on early cavalry saber belts.  Excellent and very handsome.  $275.00   SOLD 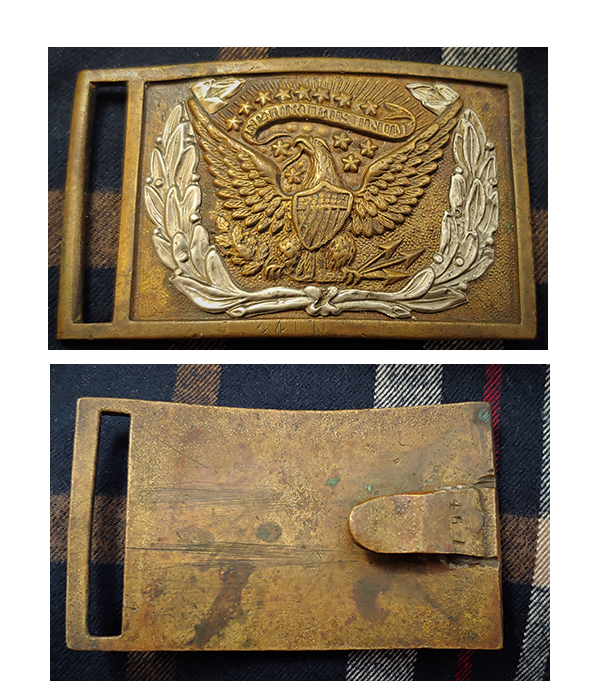 Half of a Doughnut Candle Stick Holder

21-03-10  This is one half of the set.  When complete the two halves screw together for transport in the haversack or knapsack.  Great for display.  89.00  SOLD

21-03-11  Very handsome and solid early war oval US buckle with the oval stud hooks on the back.  Excellent solid condition.  Try finding one with a metal detector this Spring.  I’m betting you can’t do it after looking daily for a month.  Top shelf specimen.  $295.00  SOLD 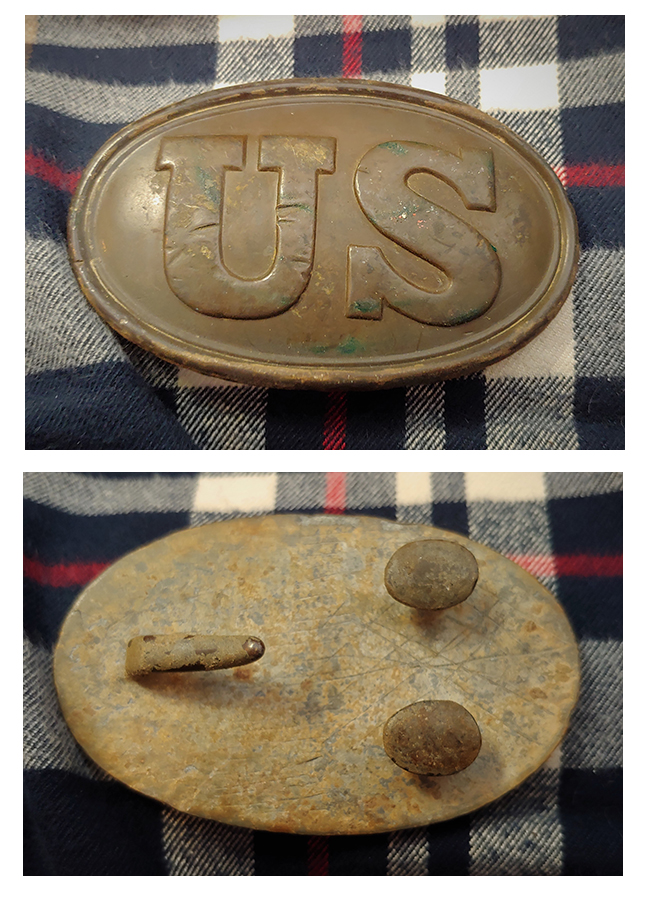 21-03-12  A very handsome early tract book for sailors.  This one bears an inscription to a sailor from his girl friend.  Our sailor boy likely hailed from Rhode Island as he added the word HOPE to the anchor emblem on the title page which is the way the state seal of Rhode Island is laid out.  $235.00   SOLD 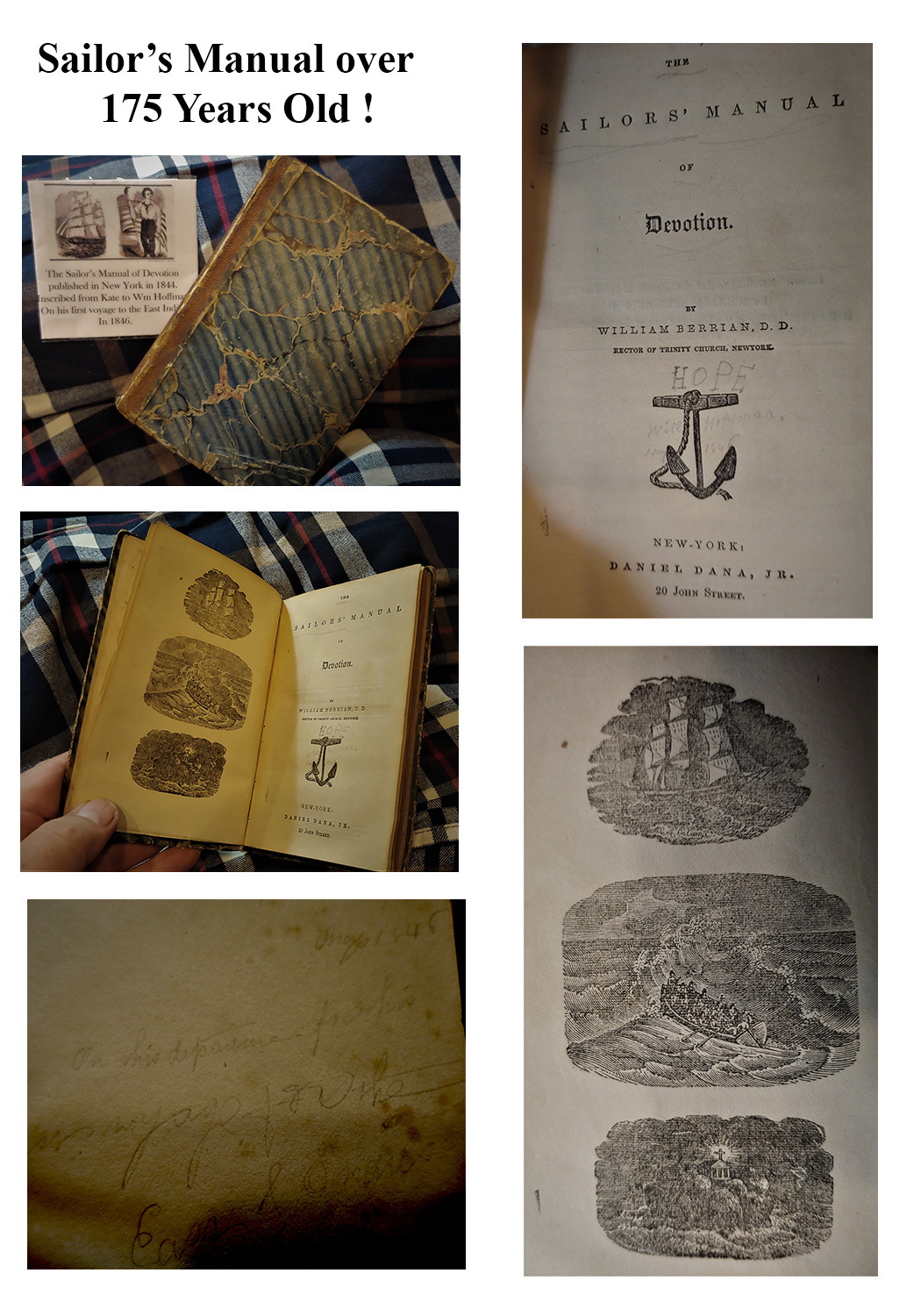 21-03-14  Belgian double barrel “side by side” percussion boot pistol Overall VG condition. Complete and honest and very affordable.  Where else can you find a functional Civil War era pistol for under two hundred dollars?   $195.00  SOLD 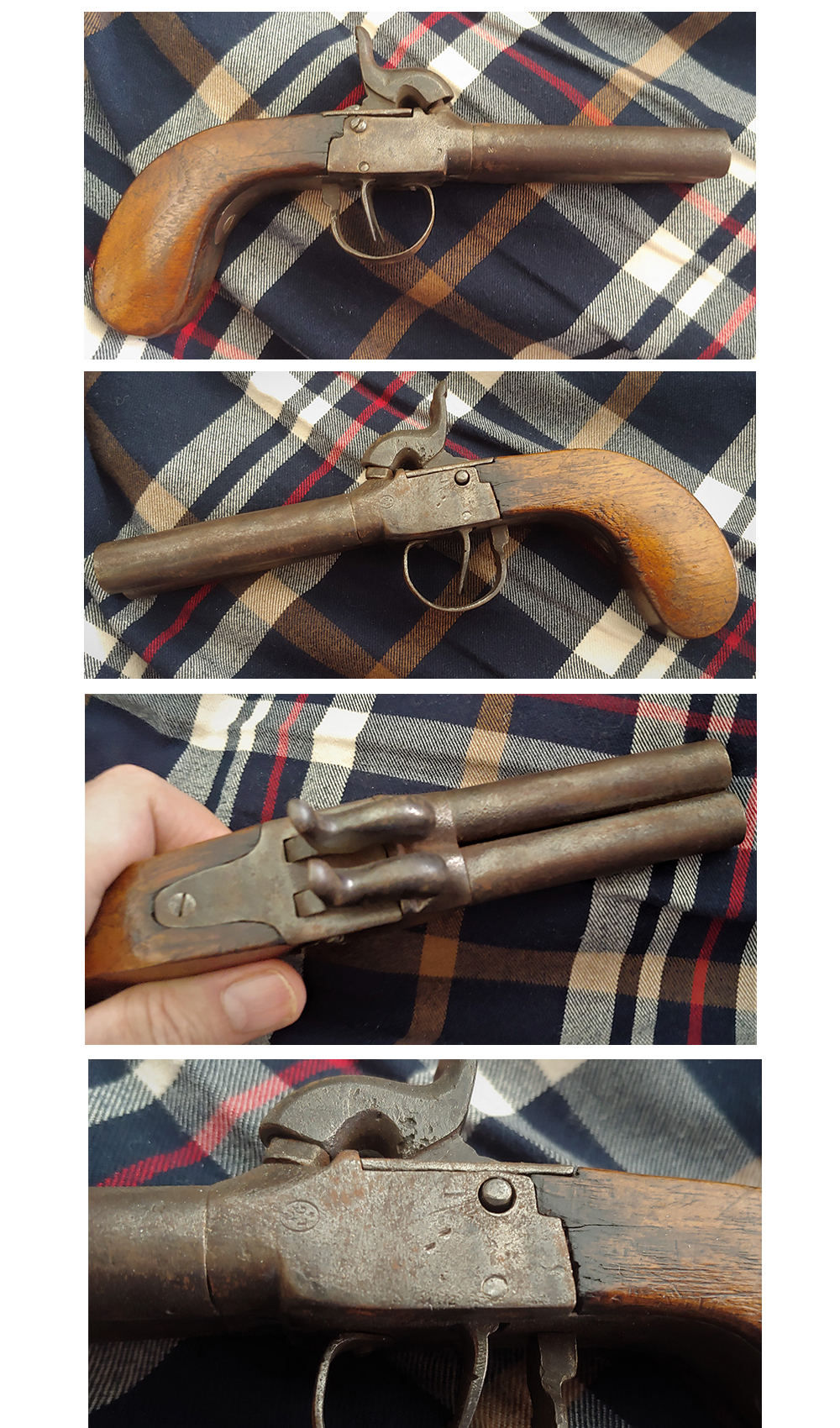