MISC018 – Incredibly Cool 1812 to 1820s Arsenal Pack of Bayonet Scabbards: The scabbards are similar to 1816 US patterns with brass throats and drags, but they are British for the Bess muskets. There are four scabbards still present (one lacks the drag) but the cool part is the accompanying original thick brown paper wrapper with the original printed green label which reads “10 Bayonet Scabbards”. One of my bayonet guru friends informs me that he believes they are Hawke Moseley & Co. products which were in use from 1812 to 1830s. He says Bannerman and company offered these for sale in the old days and this must be the remnant of one of those ancient packages. If you have a display of War of 1812 or Mexican War weapons this would make one heck of a great addition. I doubt you will find another such item for sale anywhere this year — $750.00

These scarce little buttons are stamped with the state seal of Michigan, and were made for officers of Michigan state units and are frequently found on documented CW uniforms from the low numbered regiments early in the war. These small size buttons have an empty shield in the center. The coat size buttons have a tiny hunter or soldier in the shield. Backmark:”SCOVILL MF’G. CO. / WATERBURY.” And an inner ring of dots, this is the abbreviated version of the Scovill series of depressed mark early 1860’s buttons. Albert MG4, Tice MG205As7.  A quick check of the internet shows me that Horse Soldier Shop and Union Drummer Boy Shop (both in Gettysburg) each have a coat size version of this button priced at $250.00  Horse Soldier shows they SOLD a small cuff / vest button at $100.  The cheapest I can find on the net is William Leigh,  CW Button Expert from Virginia and all around nice guy.  He has a Scovill marked small button like ours at $45.   I found a small baby food jar of these buttons for very little money.  I can supply a few lots of 4 buttons each… and when they are gone, THEY’RE GONE. 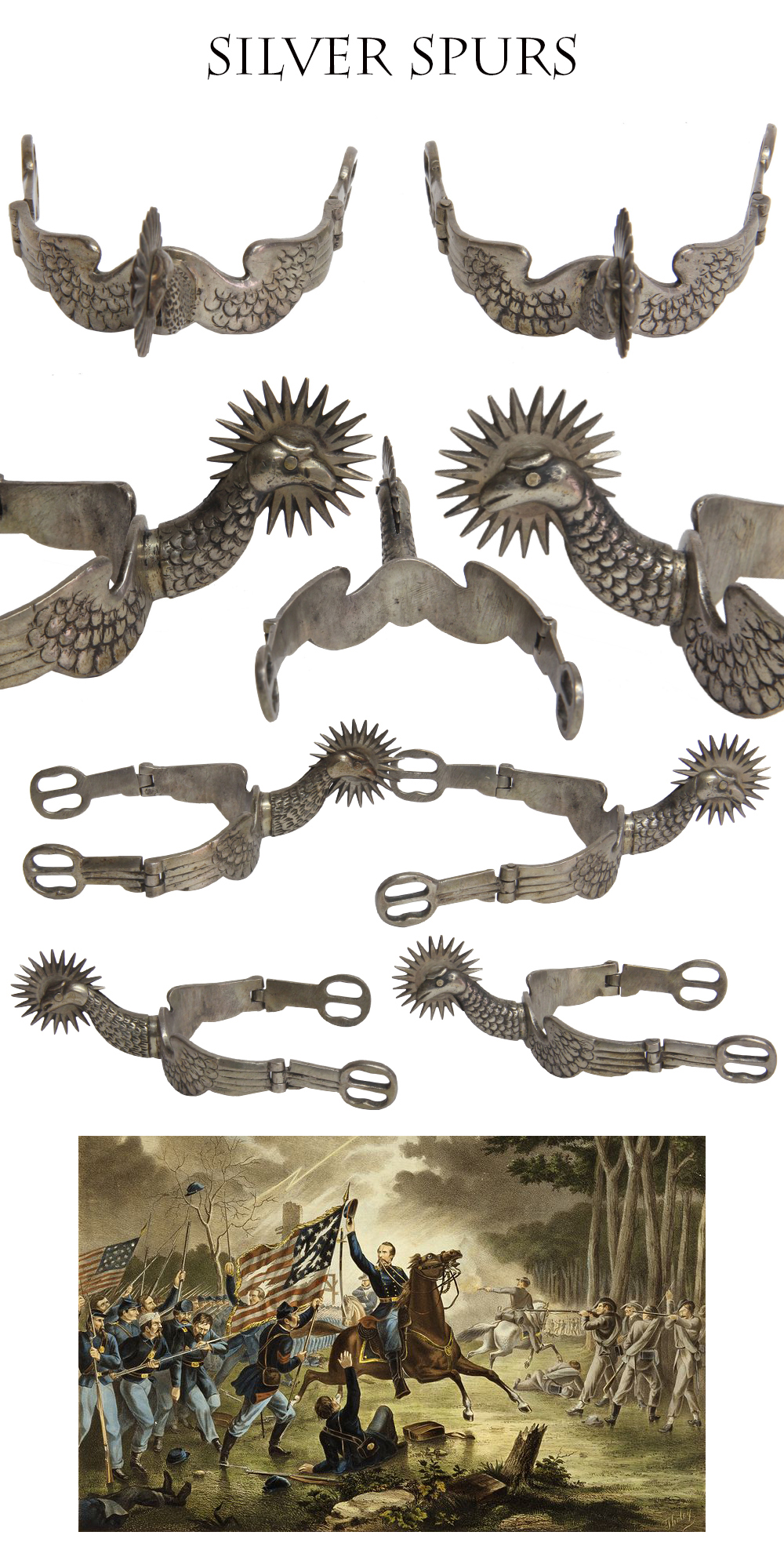 17-08-13…VERY EARLY AND EXQUISITE SOLID SILVER EAGLE HEAD SPURS… solid silver eagle head spurs. The eagle heads are similar in form to the pommels on pre-1812 Philadelphia style eagle head swords. The rowels are wonderfully designed as sunbursts that background and vignette the eagle’s head, much as the suns rays are used above and behind the American eagle on belt plates and hat insignia. The neck and chest feathers are rendered fully and with great detail. The wing feathers fade out and become lined panels, which extend back to hinges on the side bars, enabling them to be better tightened on the boot. These certainly date at least as far back as the Mexican War and may well date significantly earlier. A truly impressive set of officer’s spurs. Eagle head spurs are, and always have been very rare and desirable. The two sets I have here both came from a high-end New England collection that was auctioned near Boston. I had to battle very hard to win them and do not anticipate seeing such high quality again any time soon. Truly superb. $2,950.00 Sold

17-08-12… SUPERB BRASS EAGLE HEAD SPURS… A very high grade set of officer’s eagle head spurs. These were popular as presentation pieces to respected officers who would serve mounted. This pair is exceptional, with very detailed eagle’s heads, crest, neck feathers and plumage leading back to the side bars that are fully rendered as eagle wings extended all the way back to the strap slots. The rowels turn freely. I see only one tip slightly bent. There is an old set of leather straps on them that do not quite match, but these were often broken in use and replaced as needed. A very nice, even mellow tone to the brass. Eagle head spurs are, and always have been very rare and desirable. The two sets I have here both came from a high-end New England collection that was auctioned near Boston. I had to battle very hard to win them and do not anticipate seeing such high quality again any time soon. Among the best available. $2,450.00 SOLD 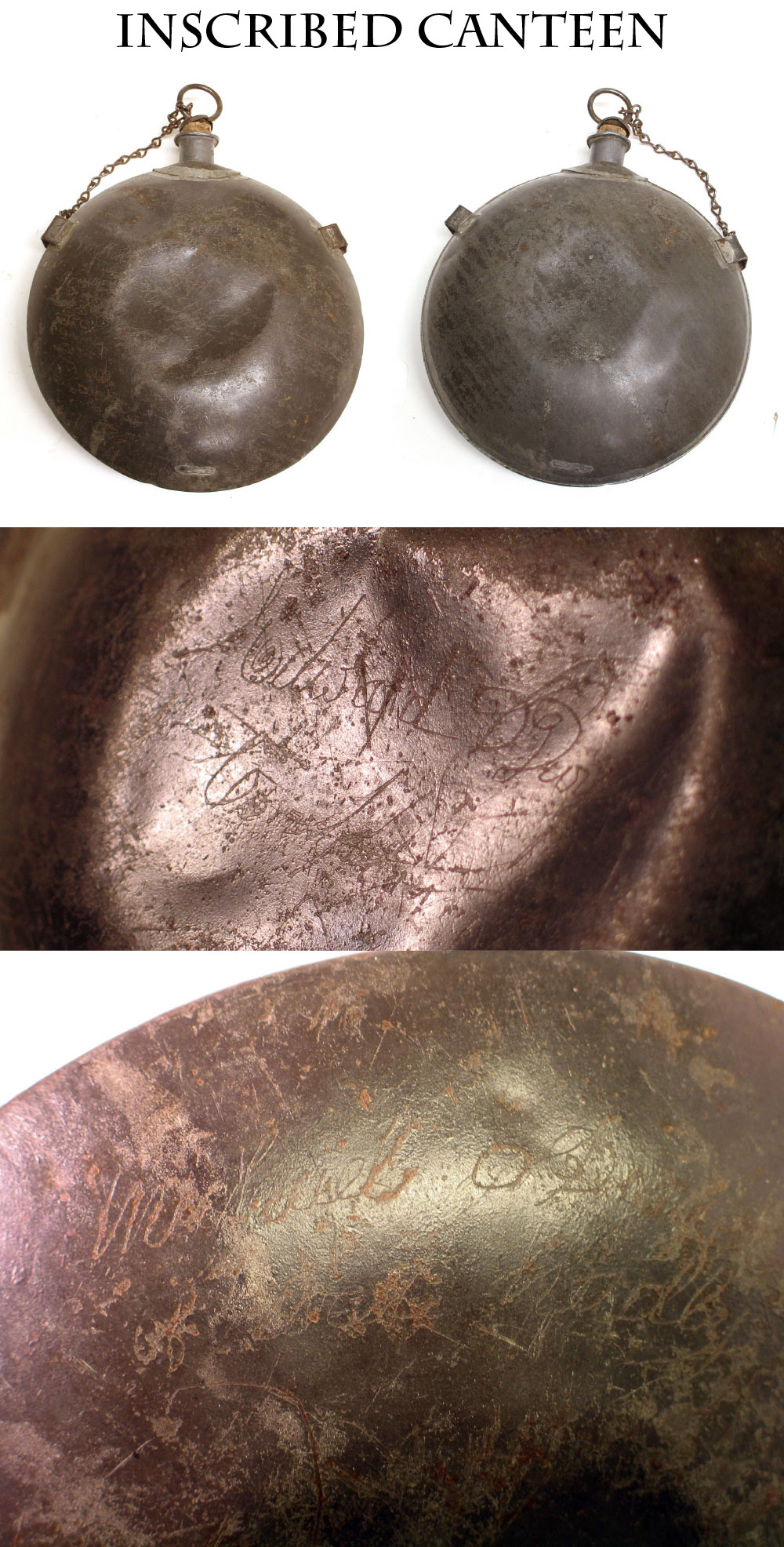 12-11-12 – This canteen is inscribed several times. “Edward D. Dwyer Saratoga ????” “Edward D. Dwyer Co??????” (appears to be a long word). Also inscribed along the outer edge “Michael Dwyer of West Hadly”. Pretty easy to find the area the men resided in… Hadley and Saratoga are in Saratoga county New York. Edward D. Dwyer whose name is in the center of both sides of the canteen is listed in the records as serving from Saratoga and having served in the 77th New York being wounded at Spotsylvania. Michael is not as easily pinned down, though deep archives research would likely tell the story. Edward appears clearly to have been the war time owner of the canteen with his name in the center of both sides of the canteen. I assume Michael is his brother or son. Nice canteen just missing bottom bracket. $450.00 Sold

MISC004 – Berdan Sharpshooter Display Item / Rare 1864 Washington Arsenal Package Sharps Rifle Ammo: We see the Sharps factory made packages frequently enough, but finding US Arsenal made packages of Sharps rifle and carbine ammunition is a darn rare event. This complete pasteboard package of ten cartridges bears the label from the Washington Arsenal. This is the first such Washington Arsenal pack I have EVER owned. The lid is open on three sides so we can easily view the cartridges. About a thousand times rarer than a standard Sharps Ammo package but only priced marginally higher. I challenge you to find another. If you have a double set trigger Berdan Sharps rifle this would be a super accent display item. $1,850.00 SOLD

MISC172 – Ultra Rare Civil War Slouch Hat of Chaplain John Neil McLeod 84th New York Infantry – I obtained this at auction along with Chaplain McLeod’s combination trunk-bed, frock coat, captured Confederate canteen, Union canteen and mess gear, and more … all stored inside the trunk. It cost me nearly $400 just to have the stuff shipped to me.

This hat is a classic “dead-on” Civil War slouch hat constructed of the finest high grade felt. It has the standard grosgrain edge binding, and the original narrow silk band around the base. The sweatband inside is long gone. The condition is very good with a couple small tears. It is solid enough to display on a wig-stand and has great eye appeal. Slouch hats from the Civil War are about 100 times rarer than the forage caps (bummers’ caps)… yet are still relatively affordable. This is the real-deal and looks great displayed with US or CS uniform items.

Chaplain John Neil Mcleod – 84th New York Volunteers. Mcleod was a Minister in the Reformed Presbyterian Church – Saint Andrews Society, and acted as such from 1833 until his death in 1874. He was a graduate of Columbia College. He served as Chaplain of the 84th New York in 1861-1863. We also have evidence that he was stationed at Camp Paulding in Baltimore in 1863. McLeod served from 1861 to 1863 which dates this old hat nicely to the early war period. A great item priced very realistically at $4,950.00 … SOLD

MISC174 – Civil War Hand Grenade Cap Tins! Here is a rare find! original tin boxes with labels for hand grenade caps. Each of these tins has a complete original label which reads, “100 / Du PONT SPECIAL / HAND GRENADE / CAPS”… I believe these are caps for the United States Hanes or Ketchum percussion grenades. DuPont supplied most of the gun powder to the Union Army during the Civil War. They obviously supplied the caps for the hand grenades as well. These tins are extremely rare, these being the first I have found and among only a handful I have seen over the years. The condition of each is very good showing some light rust. Each has its original lid with label. These tins each measure about 2.5” x 2” x 1.5”. and have completely detachable lids with the original labels. If you have a Ketchum grenade in your collection I don’t know where else you are going to find a tin of caps for it. Priced each $475.00 Sold

MISC005 – Bullion Embroidered Cavalry Officer’s Insignia: One of the rarer pieces of CW insignia to find. This measures 3.25 inches wide and 2 inches tall, with the embroidery being on velvet. There are two small holes in the velvet. This is the “soft” pattern designed for sewing to the forage cap or kepi, as opposed to the metal backed examples which were used on the Hardee and slouch hats. The edge wire is loose along a one inch section on the bottom, easy to tack back in five minutes with needle and thread. Perfect to display by itself or to gently sew to a nice used kepi to make it sexier. Great old piece of insignia. $375.00 … SOLD