Civil War Leather and Other 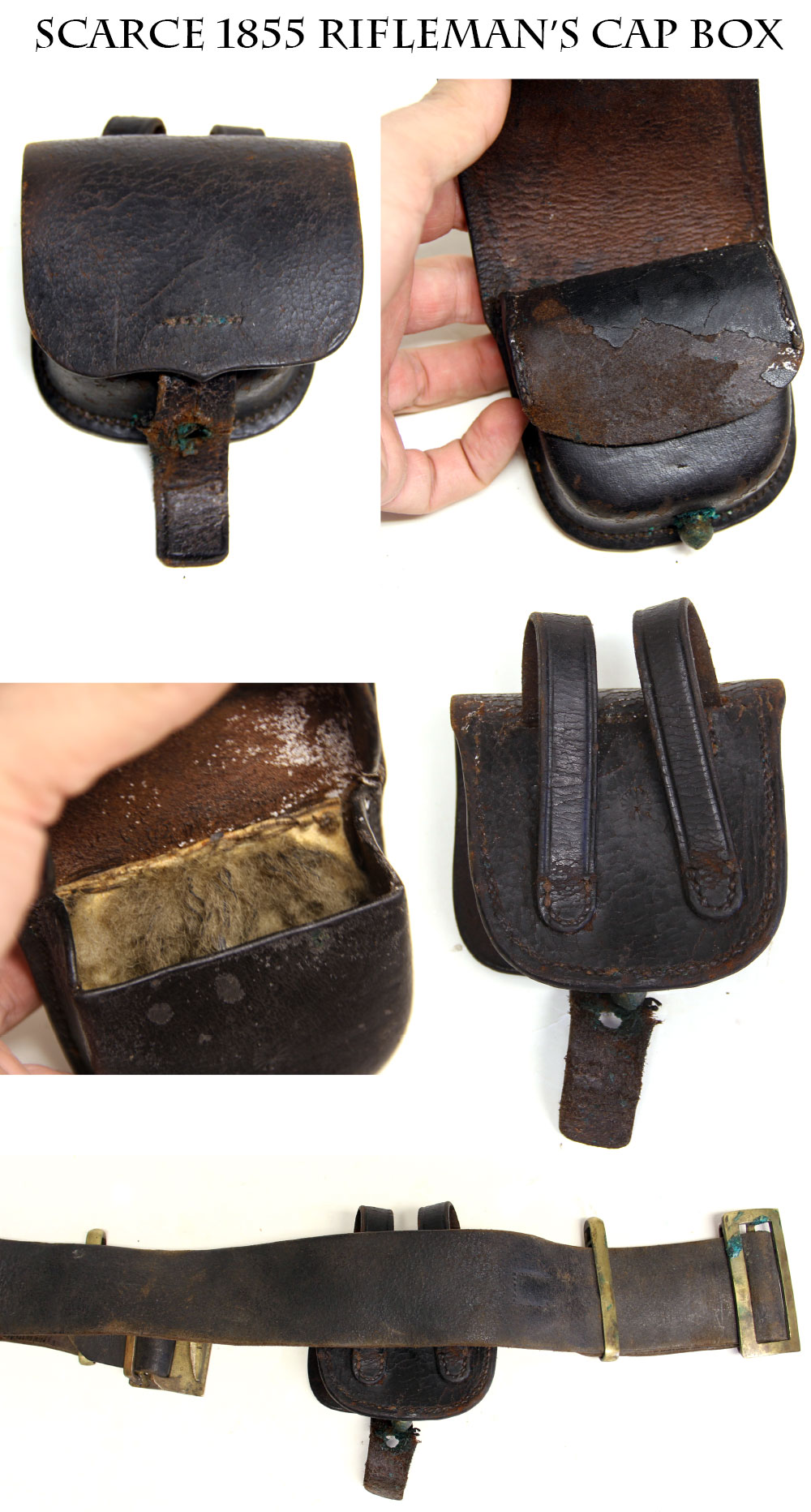 12-12-03 – Scarce 1855 Riflemans Cap Box: This has the two-piece cover that uses a full outer flap and separately attached latch tab secured by a single line of stitching. These are generally recognized as the early-war and pre-war versions of the percussion cap box. What sets this box well apart of standard cap boxes is the height of the belt loops. These loops are extra tall for the purpose of allowing use with the ultra wide 1855 riflemans belts. The 1855 riflemans waistbelt was 2.2 to 2.4 inches wide and the loops on this cap box are intended for that belt. Both loops and latch tab have lightly incised border lines. The latch tab has three small stitches in it repairing a small tear, otherwise very solid and even has some of the wool lining still present. No markings visible, which is correct for an early arsenal produced piece. The 9th and 10th US Infantry were rifle-armed regiments and saw service in the west in the 1850s. This would be the type of cap box required for their belts. You will look long and hard to find another … $350.00 SOLD

13-01-19 – Original Buff Leather Saber Hanger Straps for Cavalry Saber Belt: Here is something that NEVER turns up, both the long and the short saber hanger straps for the enlisted cavalry saber belt. These buff leather straps came to me hanging on the scabbard of a fine condition cavalry saber. I was astounded that they were present and removed them from the scabbard rings PDQ. We frequently find the buff belts with eagle buckles missing the saber hanger straps. Well here is your opportunity to buy the original straps to restore your belt. Excellent condition. The straps are buttoned together in the photo illustrations shown here. Still pliable good color no damage $550

LEATHER002 – Near Mint White Buff Leather Rifle Slings – 45 inches long, maker and inspector marked… just showing light handling wear and light soil. These white buff leather straps have always been rare and these are extra fine condition. I only have two priced each at $750.00 SOLD

LEATHER004 – Large 44 Cal Pistol Cartridge Box – This is that giant size that has nearly a 7 inch wide flap, and the main box unit is almost 6 inches. The box itself is about 1 inch thick. This box has wonderfully soft and supple leather, but no makers stamps. Overall a VG+ cartridge box. $295.00 SOLD 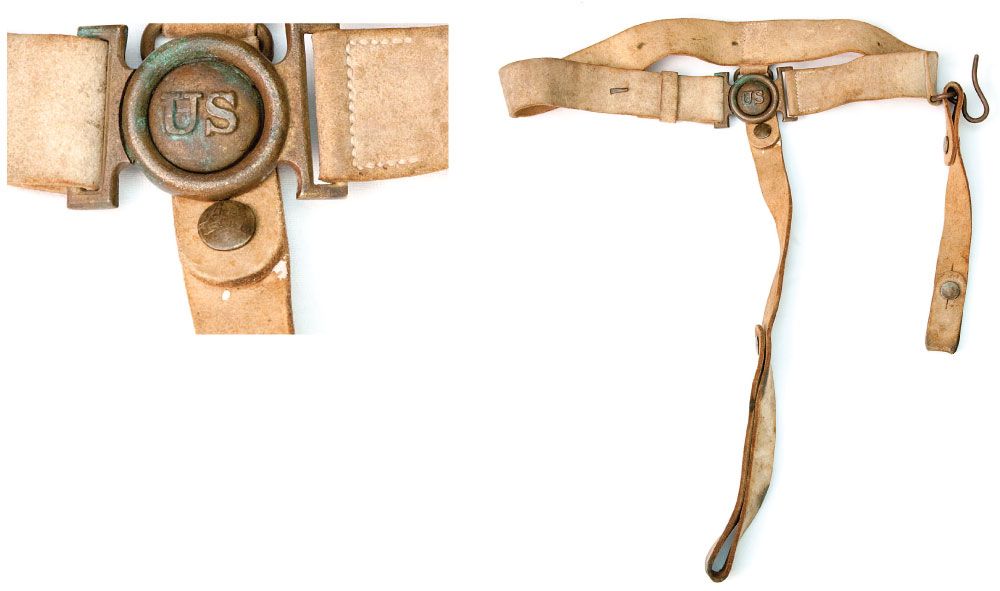 #012 – Mexican War Artillery Saber Belt – The Rarest Artillery Belt: Here is an opportunity for you to buy one of the rarest of the US enlisted belts of the 19th century. This is the Model 1839-40 white buff saber belt for the Light Artillery Saber. We see the belts for the 1832 artillery short swords on a regular basis. But this pre Mexican War belt for the artillery saber is THE FIRST I HAVE OWNED — and that is saying a lot because I have been collecting this stuff for nearly 40 years. This utilizes the 2-piece interlocking US artillery buckle as we commonly see on the short sword belts (which are now being priced at over $2000 each!). But this belt has the long white buff leather saber hanger straps for use with the mounted artillery saber. These long saber straps are what make this belt so rare. Again — this is the first of these I have owned since I began collecting in 1972. When a good friend and fellow dealer/collector offered me first shot, I jumped on the opportunity. Excellent condition and extremely rare…. $2,750.00 SOLD 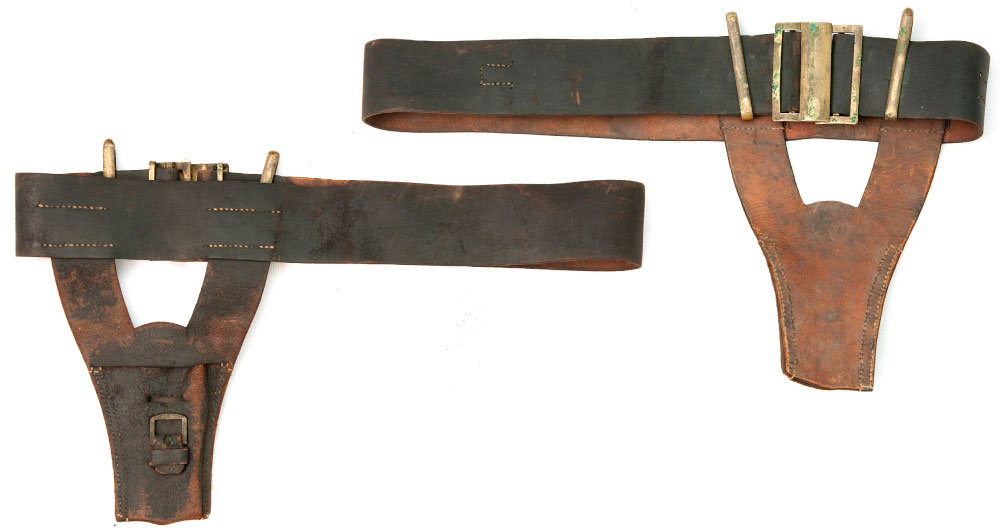 #116 – US Model 1855 Rifleman’s Belt and Bayonet Frog with four piece buckle. Purchased by an old time collector from Bannerman’s in the 1940s, they advertised it as a “Confederate Army Officer’s Sword Belt” way back when. This is a VG+ black harness leather example. 100% complete except for the short tab on the frog that secures to the buckle. These were issued with Model 1855 rifles and other two-band short rifles that accepted the saber bayonet. The buckle is rather ingenious having the central interlocking buckle and then two flanking devices designed to hold the brass hooks of a knapsack. Overall VG to fine condition, just being a little dirty from years of storage. The tourist town dealers have been pricing these in the $1300 to $1600 range… Here is a heck of a deal…. $975.00 SOLD