Civil War Knives and Other 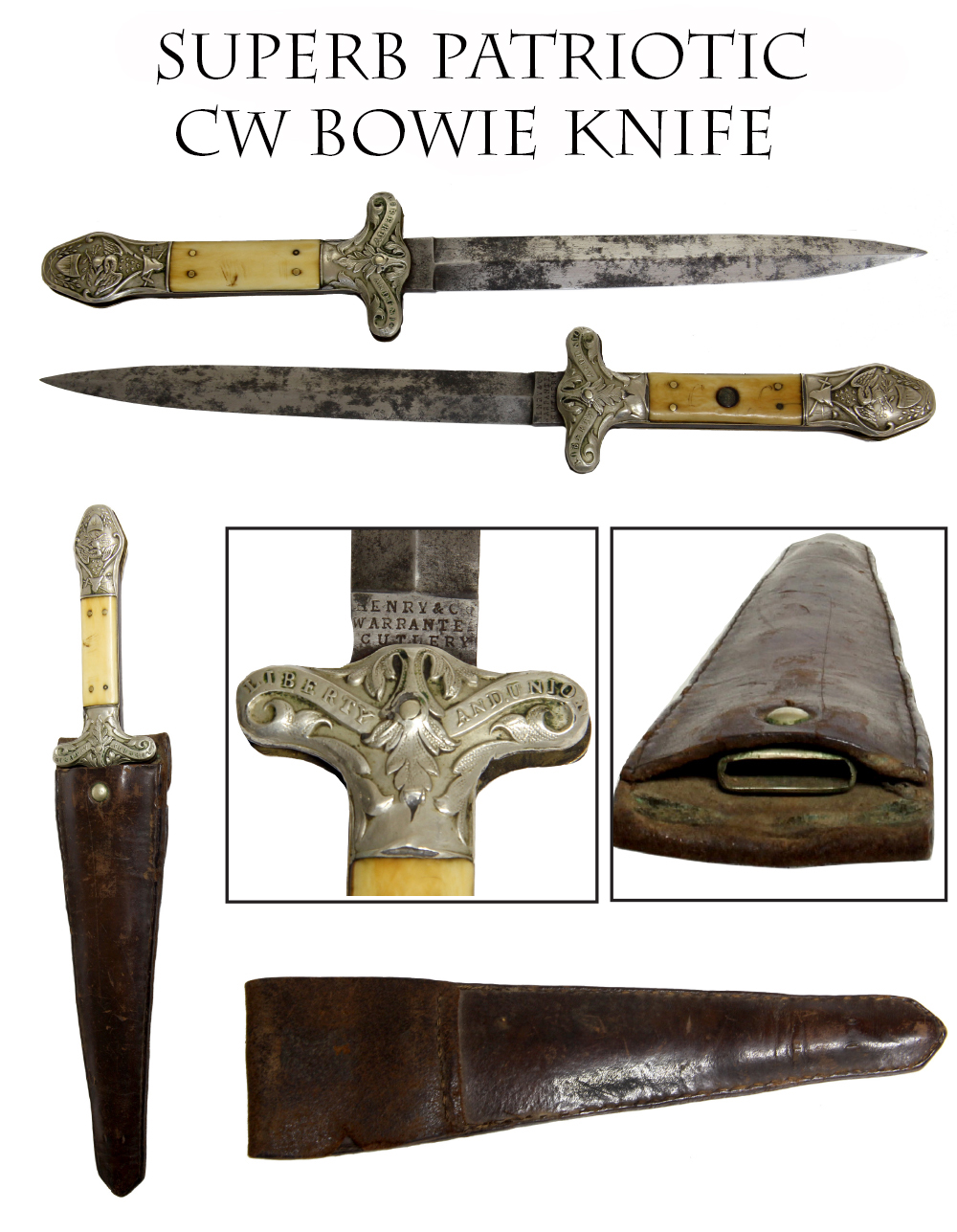 16-09-03 SUPERB PATRIOTIC CIVIL WAR BOWIE KNIFE – DAGGER: A hefty fighting knife with as much appeal as you could hope for. Emblazoned with “LIBERTY AND UNION” on the cross guard, and bearing a liberty cap, eagle, and shield on the pommel, this is about as classic a Civil War Bowie as you can hope to find. Signed by English maker HENRY & Co. on the ricasso. Measures one foot overall length in the scabbard. The spear-point blade measures 6 1/2 inches. Grip slabs are bone. Cross guard and pommel are silver with the afore mentioned patriotic motifs. Most significant is the utility grade leather sheath which is fitted over the factory leatherette sheath. The utility sheath is strong prima-facia evidence that this fighting knife saw service on a Yankee’s belt… and wasn’t just a goo-gaw kept in a drawer at home. This long bladed dagger was made for killing. The belt loop on the back of the utility sheath is precisely large enough for a Civil War military waist belt. Auctions Imperial has a web page that shows they sold a similar Henry & Co. patriotic Bowie at auction in 2009 for $7,000. Cut and paste the following link if it is not active.

12-10-22 – Civil War era bowie knife by James Westa, one of the best quality English makers from Sheffield supplying knives to the American market during the period of the California Gold Rush up to the Civil War era. Double edge spear point style with a nice blade and no sign of modern sharpening, mixed bright and gray blade. Very attractive silver or German silver top mount and slab grips secured by two pins. On one side the slab is bone, and the other side has a mother of pearl slab. The guard is a very attractive “upside down wing” with floral or shell raised motifs. The pommel matches with similar slightly flaring ridges. A tight knife. A handsome knife. No play in the handle. Comes with the original leather covered pasteboard sheath in good condition, one slight crosswise crease, but sturdy, the leather a dark greenish blue with stamped gilt border. Original German silver upper or throat mount. The scabbard tip is a replacement from a period knife, slightly darker than the throat, but a good match. A top notch Bowie knife from the early days…. 6.5” blade. Roughly 12” total length. $875.00 SOLD

#016 – Fine Large Size Silver Handle Patriotic Bowie knife – A very 1860s Sheffield knife stamped on the ricasso “Best English Cutlery”. 13 inches overall with an 8 inch blade. This is an attractive patriotic bowie knife with a fierce American eagle near the pommel of the grip and the blade having the classic clipped point form so desirable with collectors. Perfect to display with Union soldier’s effects, and a very scarce knife… $1350.00 SOLD