21-09-05  FINE GUSTAVE YOUNG DELUXE ENGRAVED COLT MODEL 1851 NAVY REVOLVER. SN 99672. Cal. 36. Fine engraved 4th Model 51 Navy with 7-1/2″ oct bbl, dovetailed front sight and 1-line Hartford address. It has silver plated trigger guard & back strap around a beautiful deluxe burl wood grip. Revolver is beautifully engraved in Gustave Youngs deluxe patterns with full coverage foliate arabesque patterns on frame & recoil shields with some scrolls terminating in flower blossoms. Barrel lug and rammer pivot are engraved to match. Engraving extends over top two side flats with a border pattern around the Hartford barrel legend. Top of back strap has the iconic Gustave Young fan pattern with matching foliate arabesque patterns near the top of back the strap, at the heel, on butt strap and trigger guard. Left side of frame has – COLTS PATENT – hand engraved in an artistic cloud-like panel well known as the Gustave Young form. Hammer is matching.

The back strap is also engraved/inscribed with the Wolverine State owner’s name. – Lt. Fred’ Banks – This is Lieutenant Frederick Banks of the 14th Michigan Volunteer Infantry. Frederick Banks lived in Pontiac, Michigan and was 23 years old when he joined the Union Army. He enlisted on 2/13/1862 at Pontiac as a Sergeant and was mustered into Co. I 14th Michigan Infantry. He was listed as: * Missing 4/30/1864 (place not stated) . During his service he was promoted to Sergeant Major, and then to 2nd Lieutenant on June 20th 1862. He was born in 1840 and died 6/12/1891. He is buried in Ridgelawn Cemetery, Oxford, Oakland Co., MI. After the War he lived in Oakland County, MI.

Regiment lost during service 1 Officer and 58 Enlisted men killed and mortally wounded and 3 Officers and 184 Enlisted men by disease. Total 246.

CONDITION: Very good. all matching except the wedge. 100% original, 100% complete, and mechanically perfect. Overall exhibits an even gun metal grey patina. Shows scattered light pitting on the bbl & cyl. Cylinder scene is quite worn. Trigger guard & back strap retain hints of their original silver plating. The wedge screw has half its head sheared off. Mechanics are fine. This is a real Factory Engraved Colt with wonderful historical inscription to a fighting Michigan Officer. 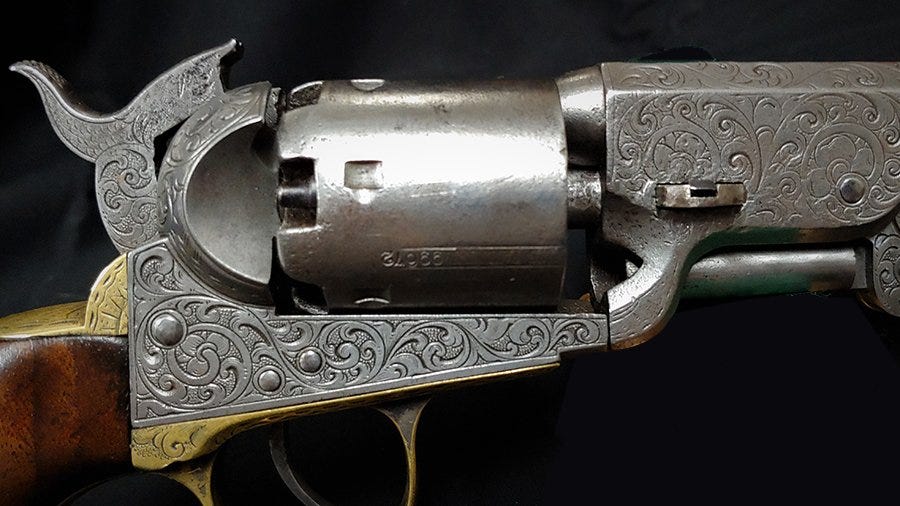 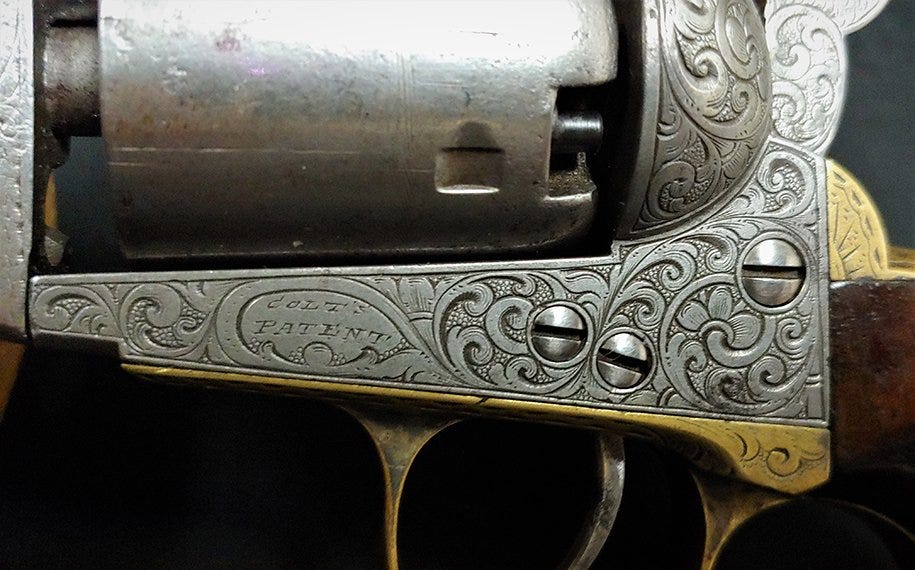 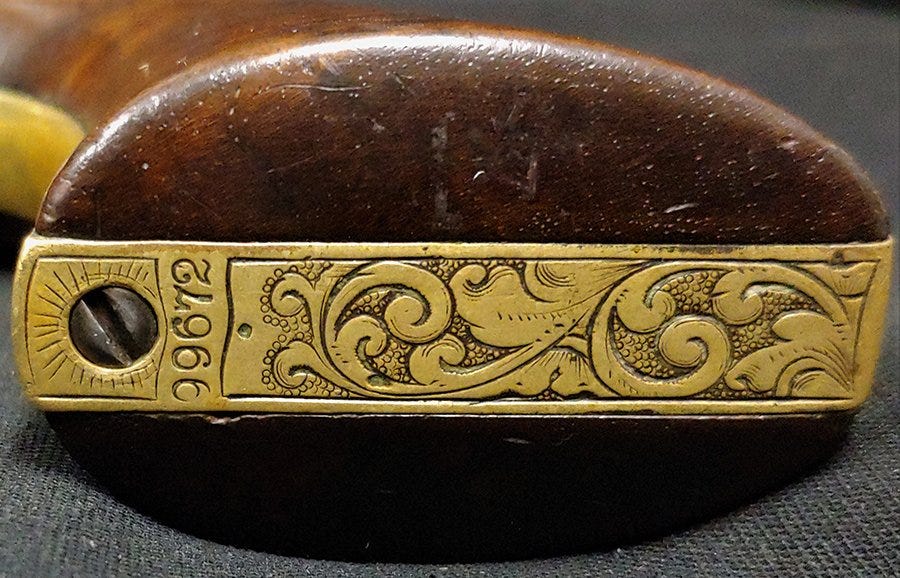 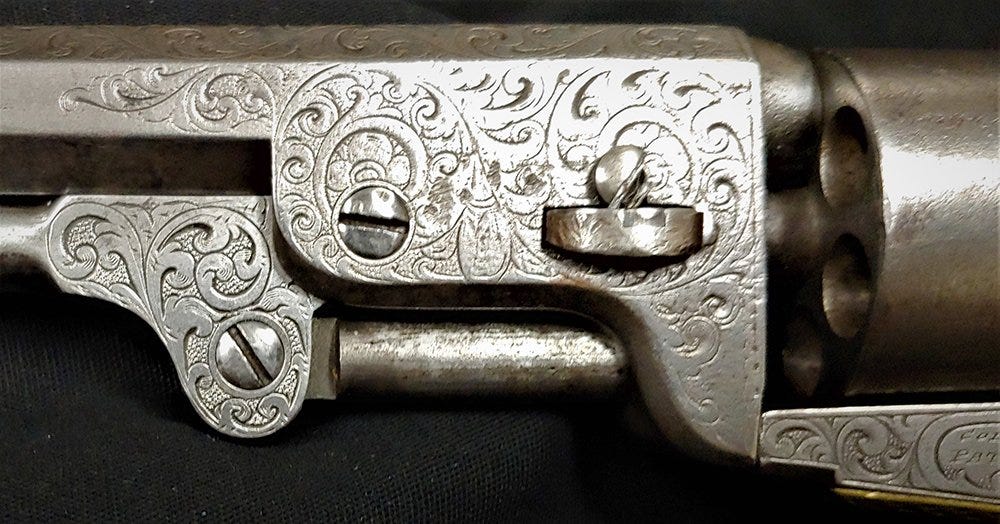 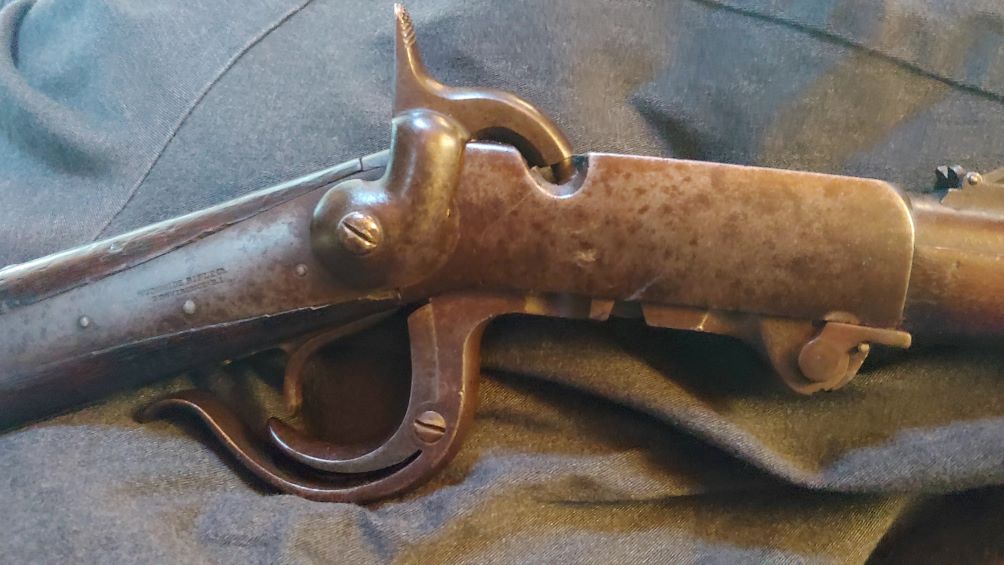 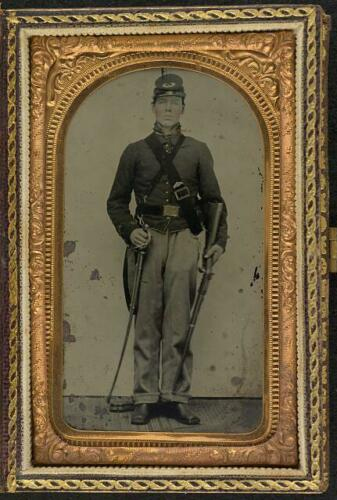 Image of soldier is for illustration purposes only.

21-09-03  This just turned up this week at a modern gun store in Findlay, Ohio. Helper Chuck happened to be there and snagged it. It is fresh to the market, and completely honest and solid… Un-messed with. It is a 4th model with no lever-guide screw in the right side of the frame.  Much scarcer than the ubiquitous 5th Model.  It’s 100% original. 100% complete, mechanically perfect, good bore, good cartouche, crisp markings dates etc… Really nice.

This gun has a near perfect age patina on everything. The steel is uniformly plum brown, the wood looks like a well loved piece of antique furniture, and it clearly shows real wartime use. The wood has some ancient bruises, owner’s initials, and a chip out of the forend that happened when this rifle was shooting at Rebs. It was also SPUR-DECORATED by the trooper who carried it. For whatever reason our cavalryman ran the rowel on one of his spurs back and forth to impress a series of dotted lines on each side of the butt stock. Maybe he thought he was checkering. Or maybe he was drunk. But there’s no doubt that’s what put the dots in the wood. I use a spur to perforate folding edges on cardboard boxes for shipping, same marks exactly.

The serial number is 10976 which is in the range of guns known to have been issued to the 2nd Texas Cavalry. This does NOT mean this gun was issued to that unit, but it suggests that it may have been.   $1,495.00 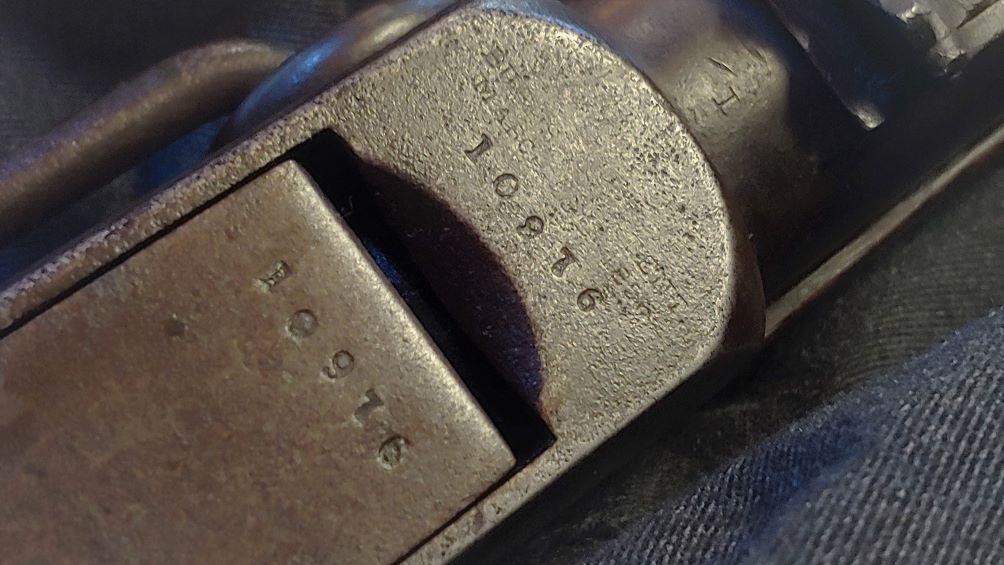 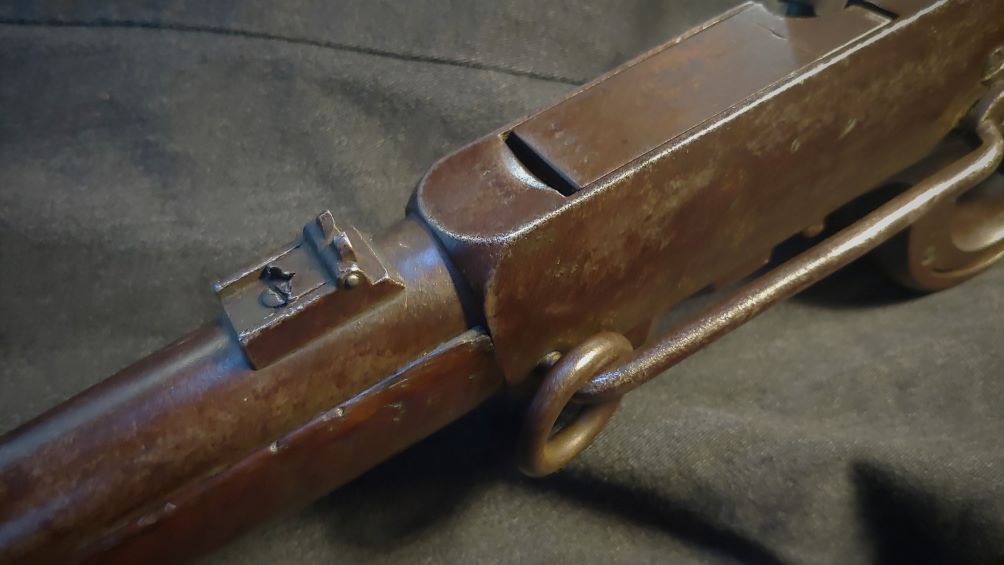 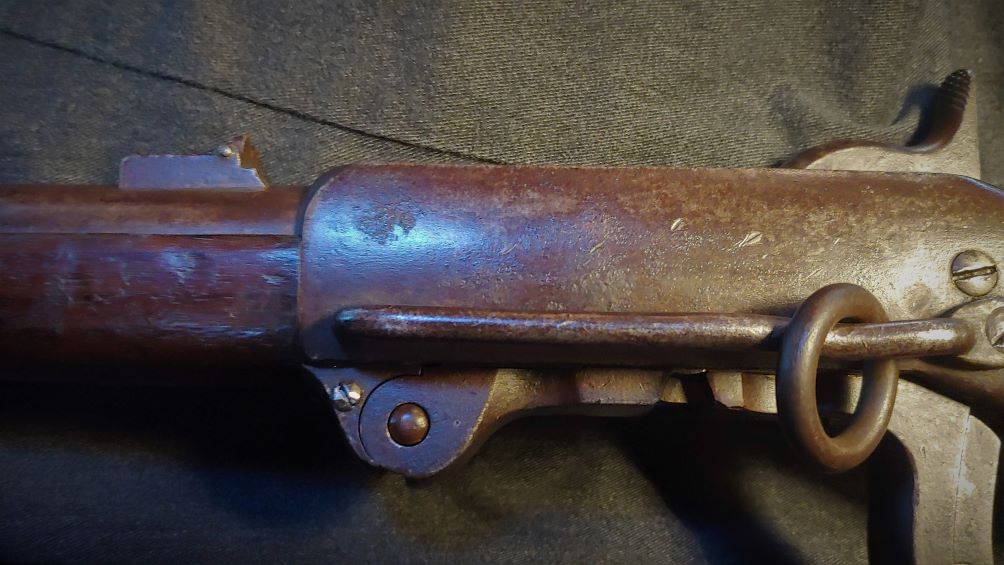 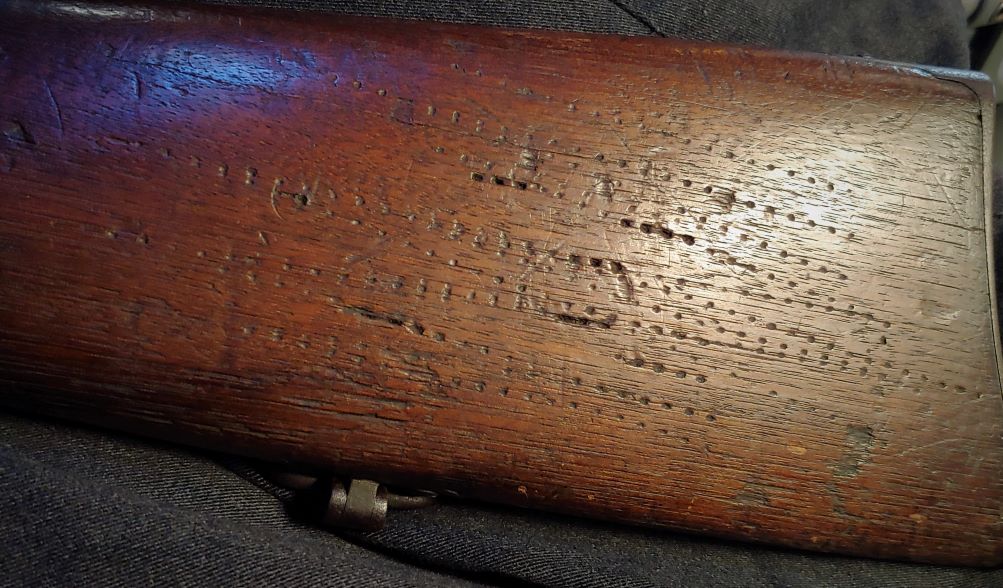 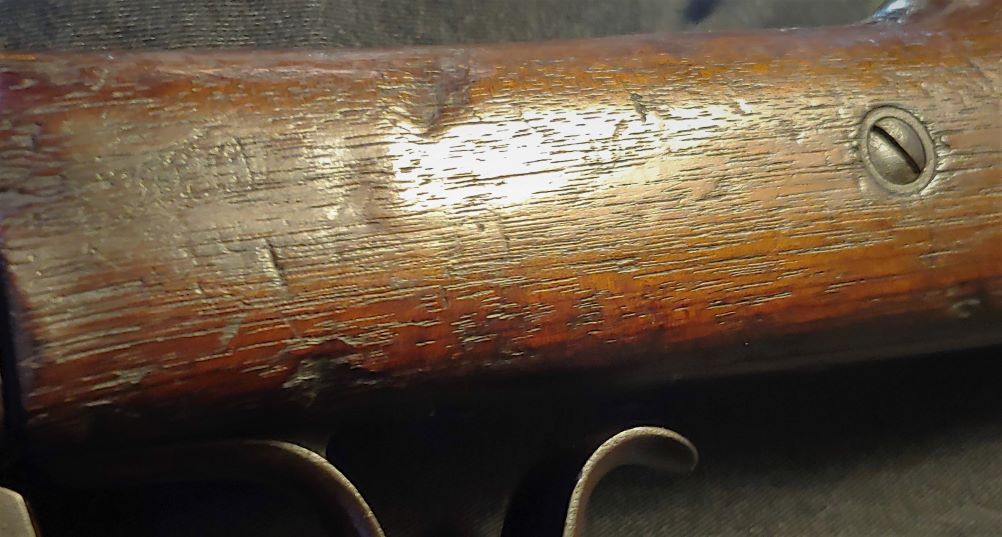 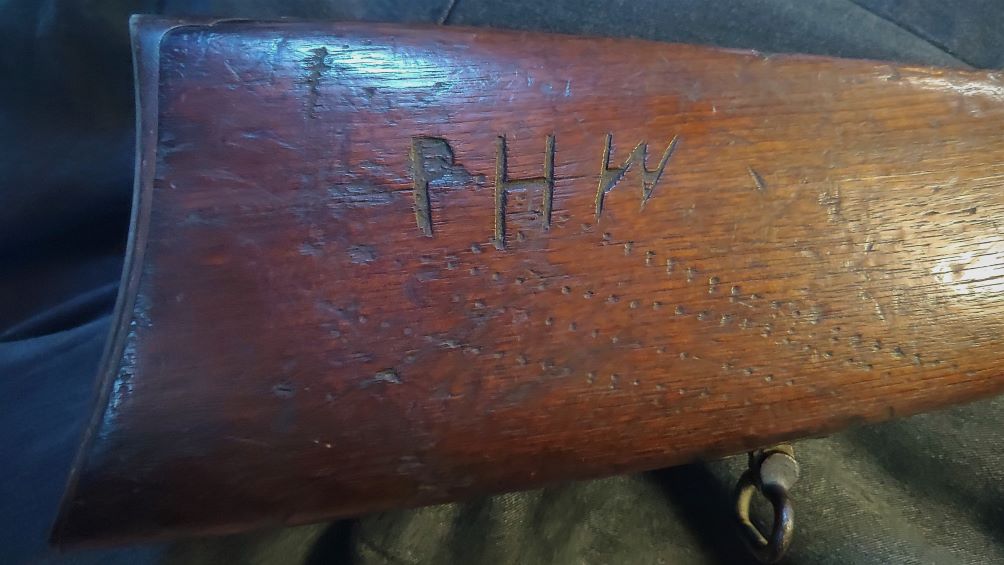 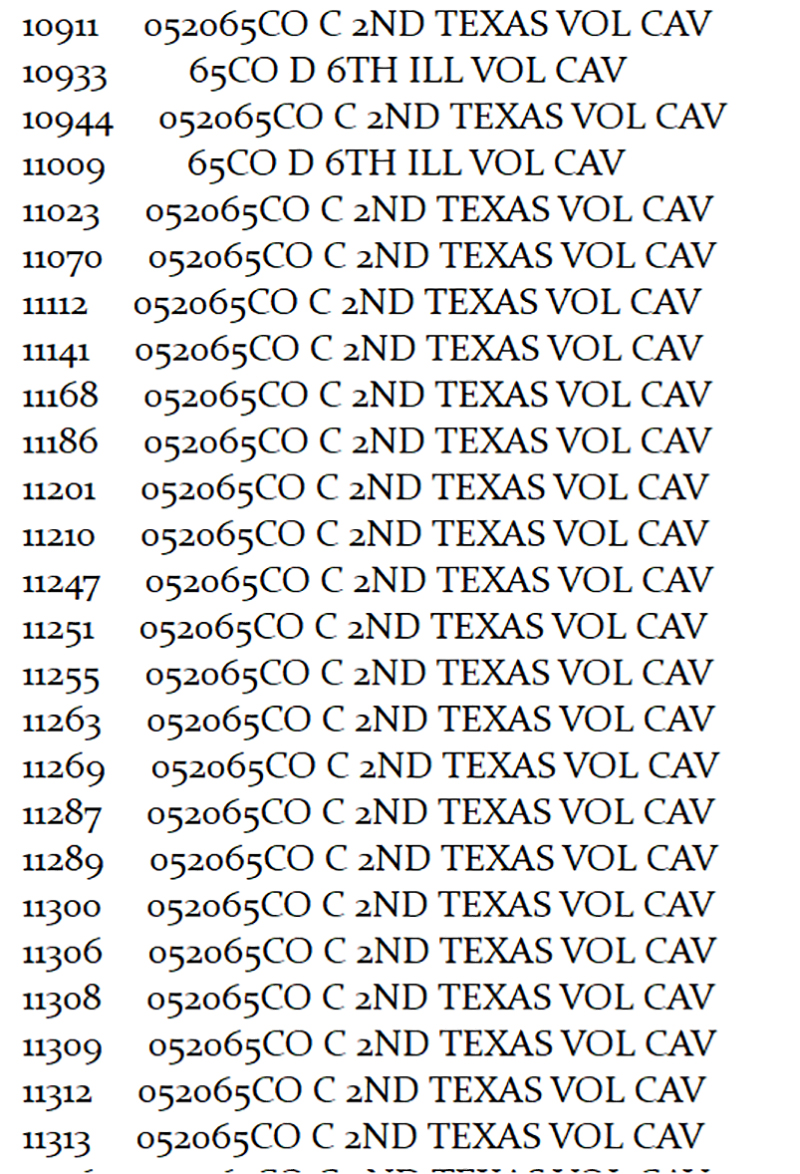 That Have Been together for 150 Years. 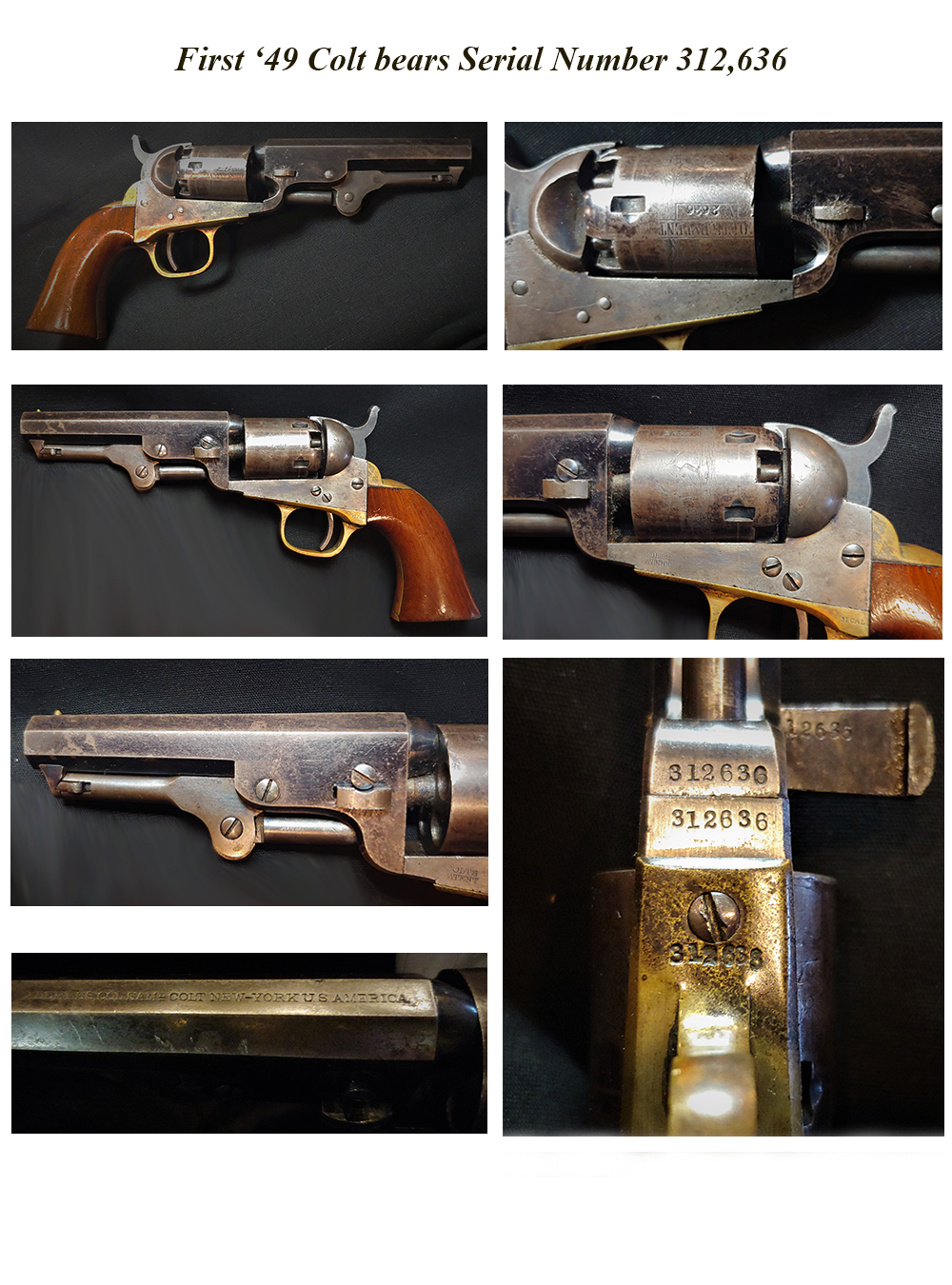 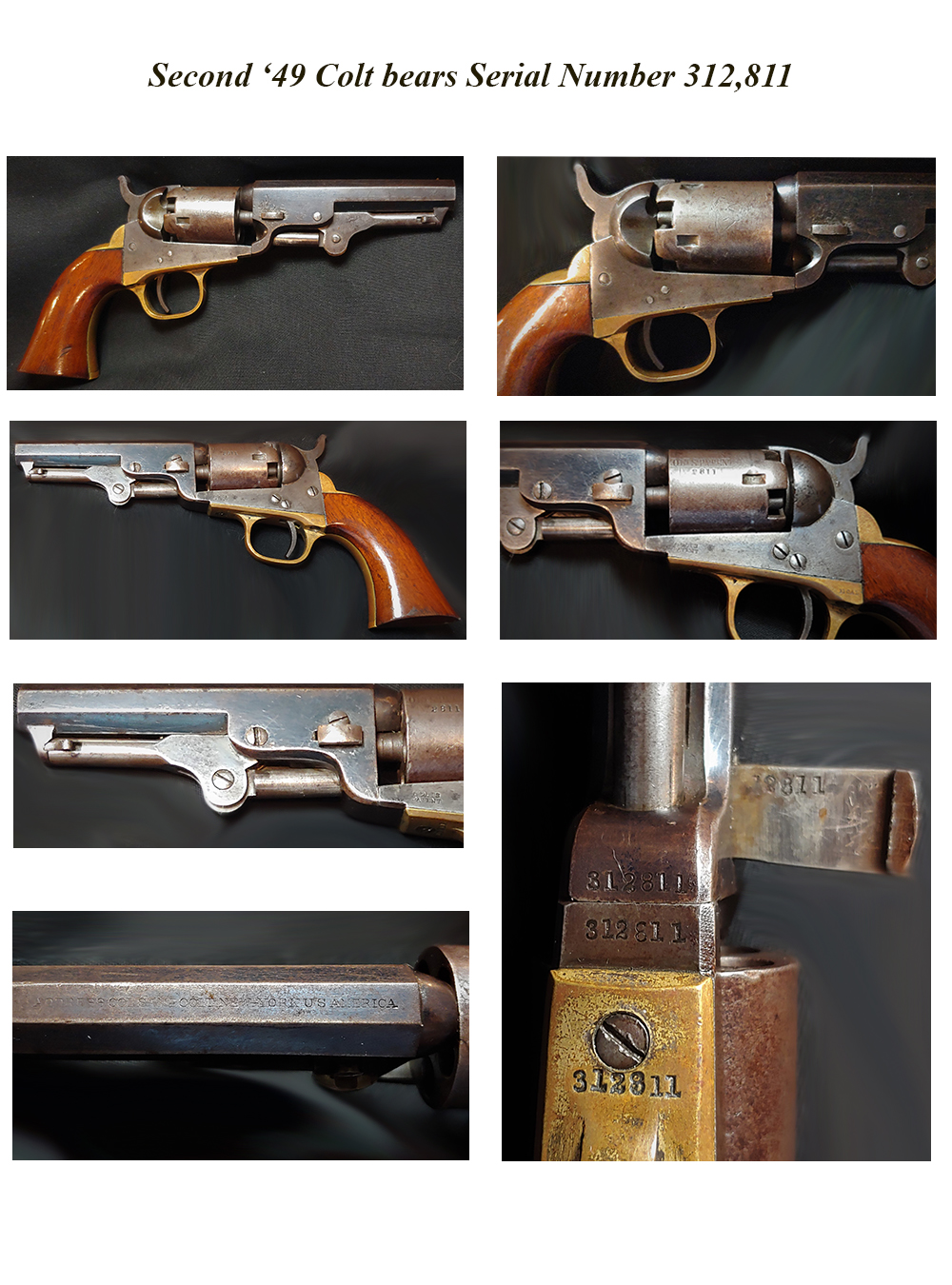 20-04-03  A genuine matching pair of Colt pocket revolvers. Serial numbers 312636 and 312811. Both manufactured within a day or two of each other in 1869, with matching fine condition and patina, and less than 200 numbers apart.  These are NRA fine condition with generous amounts of blue finish remaining and generous traces of case color also present.  Each gun is 100% original, 100% complete, Mechanically perfect, and has all matching serial numbers including the wedge.  The loading levers on these are not numbered which is absolutely correct and proper for Colts in this serial range.  The near perfect walnut grips on both rate excellent plus. Both grips have the desirable varnished red-orange color and tone as seen on fine condition Henry Rifles.  Far prettier than the military oiled walnut grips we see so often.   Medium patina on the brass on each gun, a tad darker on 811. 35% to 40% matching thin blue on both 4 inch barrels and matching traces of case color on both frames. The cylinder on 811 shows a bit more brown and slightly less crisp scene and marks, but both are nicely visible. 636 also shows a slightly sharper barrel address, so it looks like 811 was the pistol the owner carried more. Probably the “right hand gun”. These would look great cased together if you happen to know where an empty 2-gun casing can be found, or if you want to make or buy a custom box, that would be neat. Or… if you have a pair of period holsters and a belt, (or buy same at the next antique arms show), that would really make a heck of a western frontier display with these great old matched Colts. A very handsome, true matched pair of very early western Colt pockets.  Each gun is easily worth the better part of two thousand dollars individually.  Matched pairs generally bring double the value.  I will sell this pair for $4,250.00

16-08-22 …EARLY PRODUCTION (1870) NRA EXCELLENT CONDITION MODEL 1866 WINCHESTER RIFLE:… I can’t praise this gun enough. The absolute finest 66 rifle I have owned, and perhaps the best condition example currently for sale. 44 caliber, 100% original, 100% complete, mechanically perfect, and way beyond extra fine condition. THE gun that won the west in screaming top end condition. NRA “Excellent+” condition. A true gem. OK… enough of that. The photos do not justly capture the blue finish. 24” octagon barrel retains 95% of its original bright factory blue finish. Mint edges and mint markings. The hammer exhibits 90% case color. Bore is superb. The brass frame and furniture has an absolutely PERFECT undisturbed dark mustard age patina. No nicks, no cleaned areas, perfect and untouched. Rear sight is simple fixed notch block sight. Fitted with sling swivels. The wood is likewise excellent with sharp edges and no damage. Serial number 39066-B puts the date of manufacture at 1870. If this was a Henry rifle it would fetch around a hundred thousand dollars. It is not mint but it isn’t far off. If you can find a comparable gun at this price… you should buy it! If you know of a comparable gun for sale at “a margin” less than this price, tell me and I’ll buy it. $22,500.00 SOLD

13-11-15 … 13-10-10 … Nathan Starr 1816 Pattern Musket dated 1830, with an arsenal percussion conversion. Few American arms makers are better known than Starr, who had a wide variety of US contracts for muskets, pistols, sabers, and cutlasses over a long period. Here is a solid example of his 1816 Pattern Type 3 flintlock with the “cone-in-barrel” or “Belgian” style conversion favored by US arsenals. Starr made some 15,000 of these muskets between 1829 and 1840. This is one of the earliest versions, second year, and bears the 8-pointed star or floral motif at rear of the lock behind “MIDDtn/ CONN/1830.” Forward of the hammer is the standard small US over a sunburst and N. Starr. The lower portion of the sunburst and the Starr name are rubbed as is often the case when the arsenal ground down the brass flash pan and added a military percussion hammer. The US mark is sharp. Clear eagle head and sunken “P” proofmarks on the left barrel near breach. Good strong edges on wood around lock and a good butt stock and fore stock. Some wood dings opposite the lock, very minor chips to edge of triggerguard tang on underside and a carved letter “H” from a previous owner or soldier. Lock plate shows cloudy gray of faded case color, barrel is dull silver with rising brown areas, but smooth overall with just a couple of corrosion dimples near the nipple from firing. Correct swivels, ramrod, barrel bands and springs, mechanics good. After the percussion system was adopted by the U.S. government flintlock arms held by arsenals were divided into classes by age and condition and the newest and best condition guns were converted to the new system by several methods. The cone-in-barrel style was the one favored by the arsenals. These became the weapons issued to volunteers in the early years of the Civil War as the army expanded and new production could not keep up. This gun has surely seen some good history, a pre-Alamo and Seminole War musket that later found its way into the ranks of the north or south, in 1861. Very good to near fine condition. 100% original, 100% complete, and mechanically perfect. A very affordable musket from America’s early days … $975.00 SOLD