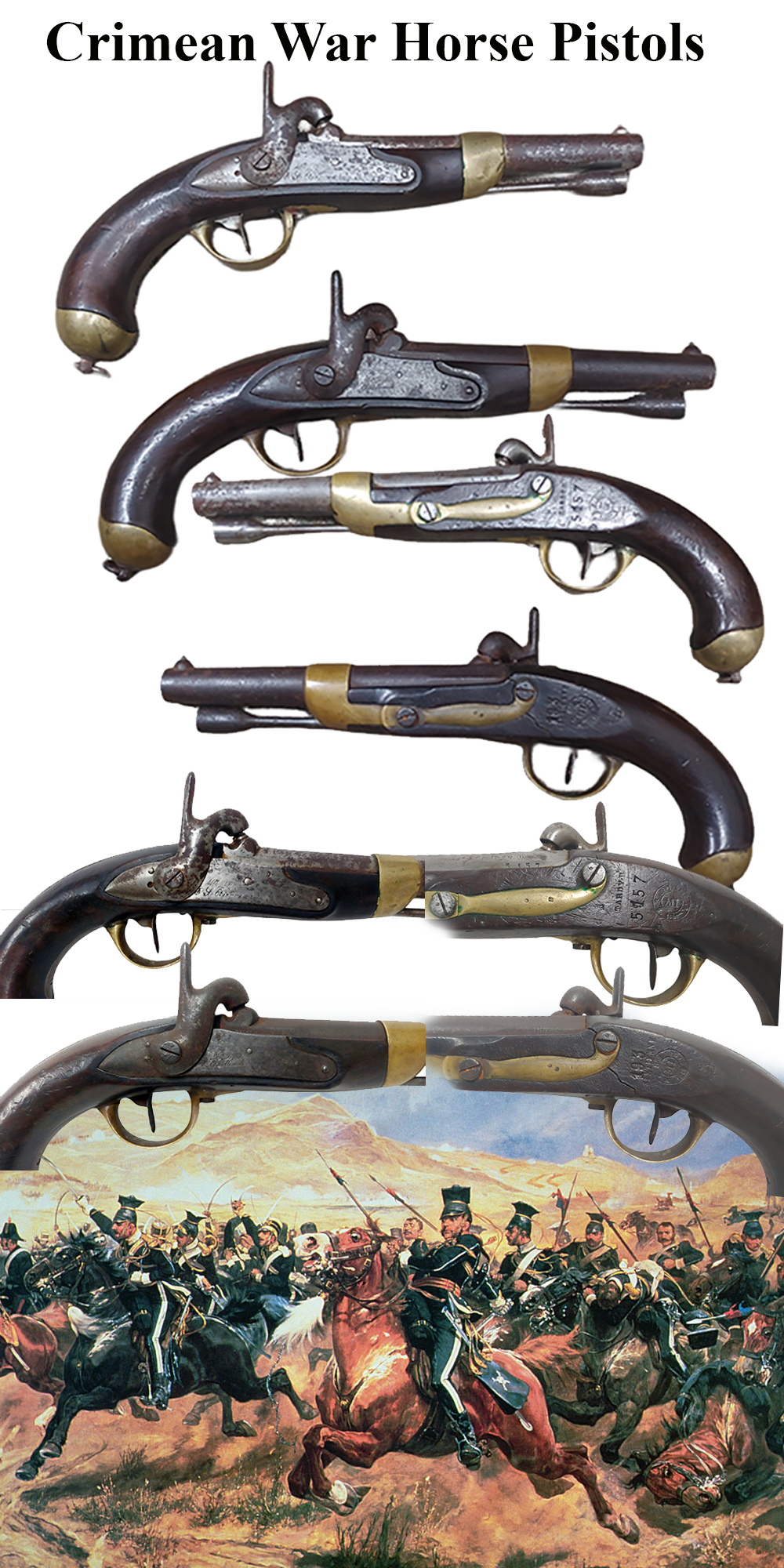 230113  PAIR OF FRENCH HORSE PISTOLS:  1840s 1850s large bore percussion horse pistols as used in the Crimean War.  Both pistols are 100% original, 100% complete, and mechanically perfect.  One has a crack in the stock as shown.  Well marked and crisp.  A very striking pair of martial pistols perfect for the wall in your den or collection room.  These are great massive man killers from the days when dragoons had a pair of these strapped to their horse’s necks.   Priced very friendly at $995.00 FOR THE PAIR! 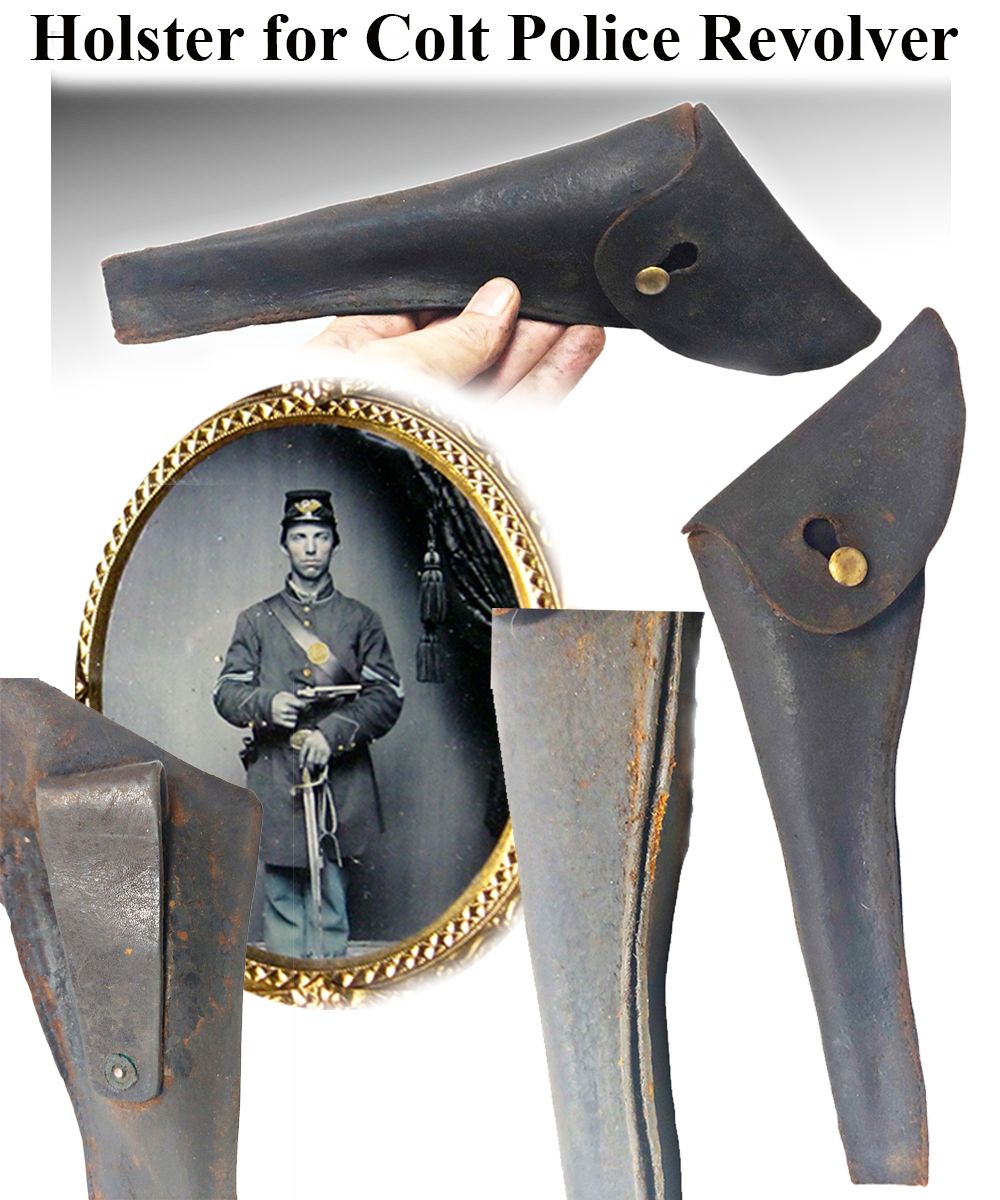 230114  HOLSTER FOR 1861 COLT POLICE MODEL REVOLVER:  Nice and solid with good life in the leather.  The streamlined 1862 Colt “Police” model was produced in limited quantities and sold on the commercial market.  Our corporal in the illustration bought or was given his Police and he is obviously proud of it. He carried it in a holster just like this one.  An earlier collector repaired the split seam with glue and consequently it is too tight to fully insert a revolver.  You could re-do the seam but I don’t have the time.  Super to display next to your ’62 Police or to put on a waist belt.  Scarce piece of leather…   $165.00 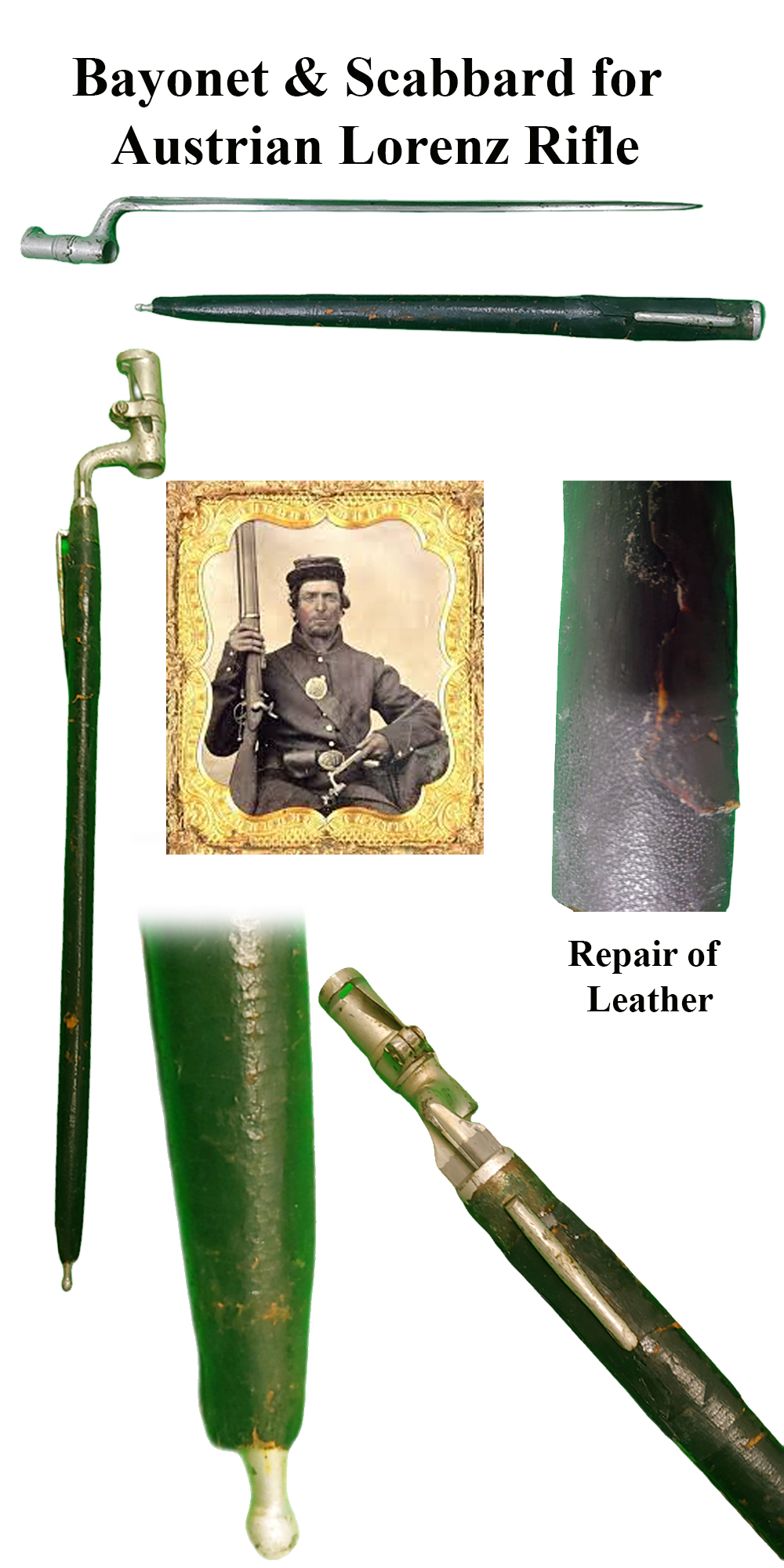 230115  BAYONET AND SCABBARD FOR LORENZ RIFLE:  Good solid quadrangular socket bayonet for the US / CS Lorenz rifle.  Socket portion (only) is plated… not sure if that’s how these came or not, but it sure looks like it was made this way.  Blade itself is arsenal bright in original polish.  We glued a small piece of leather near the attaching hook to cosmetically fix a small area where some leather had chipped away.  These pig stickers are really hard to find with the Austrian scabbard.  $295.00 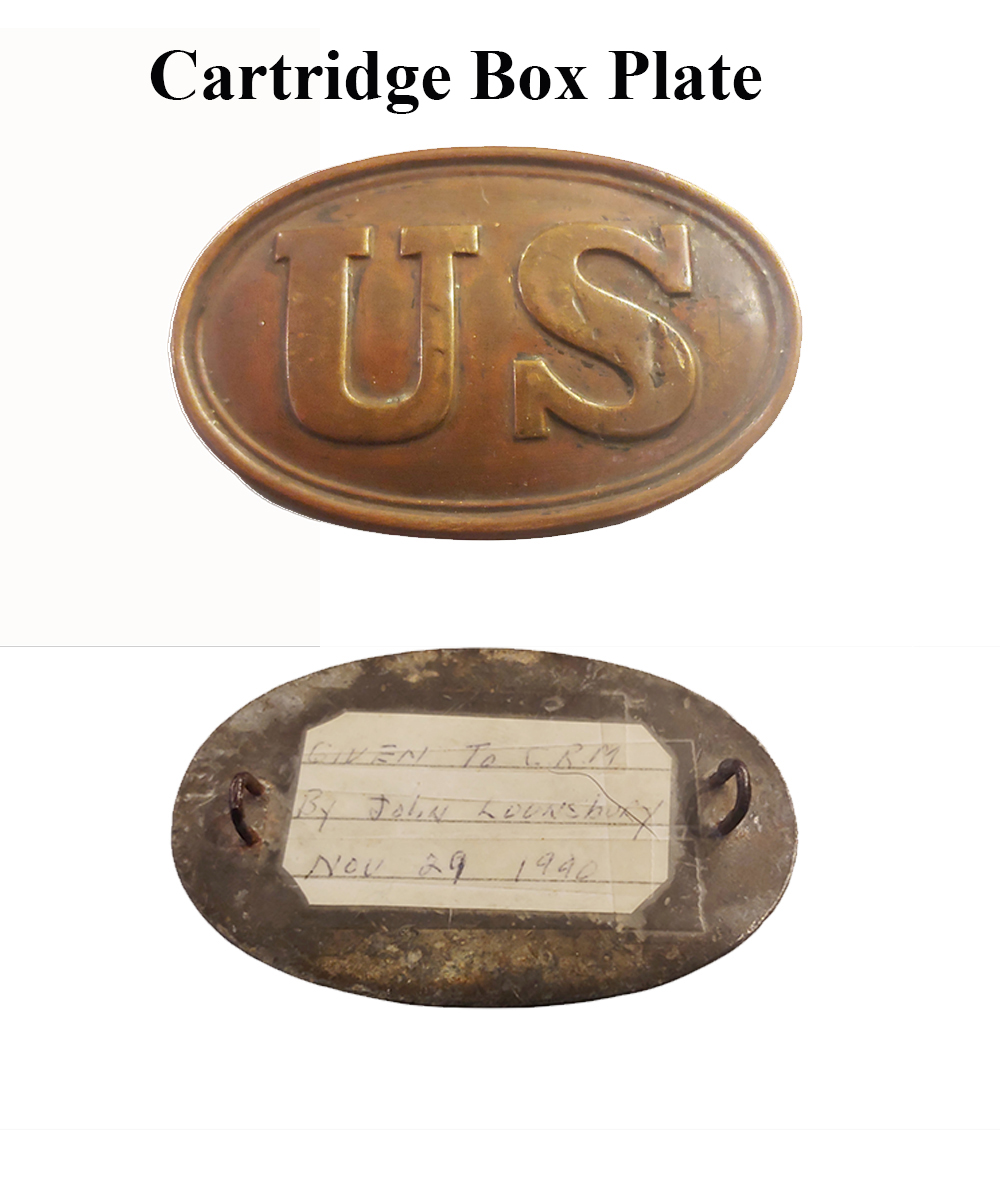 230116  EXTRA PRETTY UNION ARMY CARTRIDGE BOX PLATE:  This is the piece that weighted down the flap of the infantryman’s cartridge box to keep cartridges from falling out when the flap was not secured by the latch tab to the finial.  About as attractive an example as can be found with rich unmolested patina.  Has an interesting 1990 ownership note affixed to the back.  I am betting the plate belonged to Mr. Lounsbury’s great grandfather.    $195.00 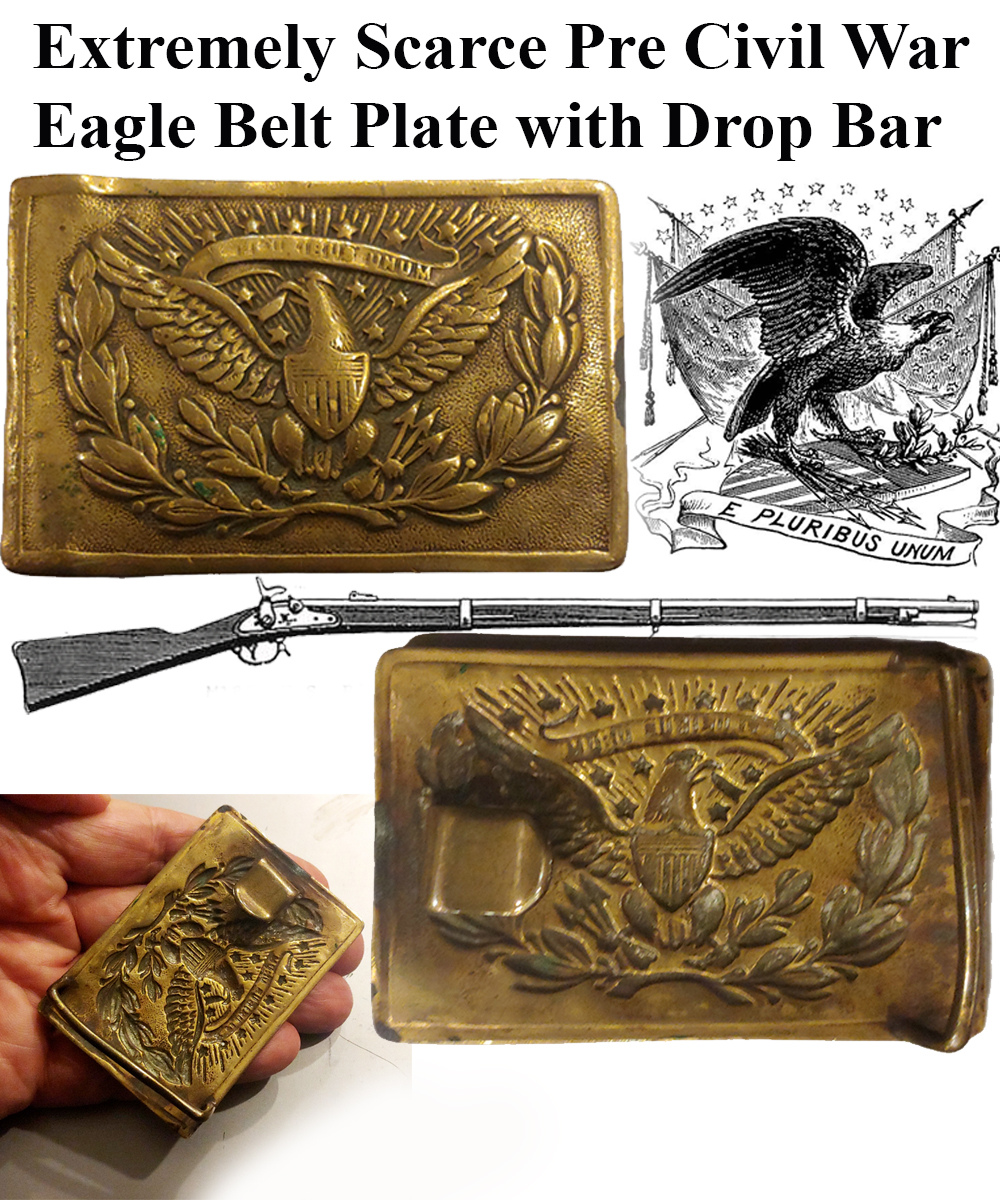 230117  VERY SCARCE 1850s TO CIVIL WAR DROP-BAR MILITIA EAGLE BELT PLATE.  At first glance you might think you are looking at an Indian War period eagle buckle.  You Are Not.  This pattern is definitely 1850s to early 1860s.  Note the drop bar and narrow tongue are the same as the 1820s to 1840s square eagle belt plates.  The later Indian War plates usually have very wide tongues and heavy gauge brass bars, and the plates themselves are usually thick cast brass and heavily gilt.   The tongue and its attachment on this plate are classic 1840s style.   The plate itself is substantial sheet brass, very sturdy but quite thin.  It is struck with a die and counter die.  Very high quality.  These were worn by members of bands and militia units on parade.  A very scarce variant eagle waist belt plate.  $295.00 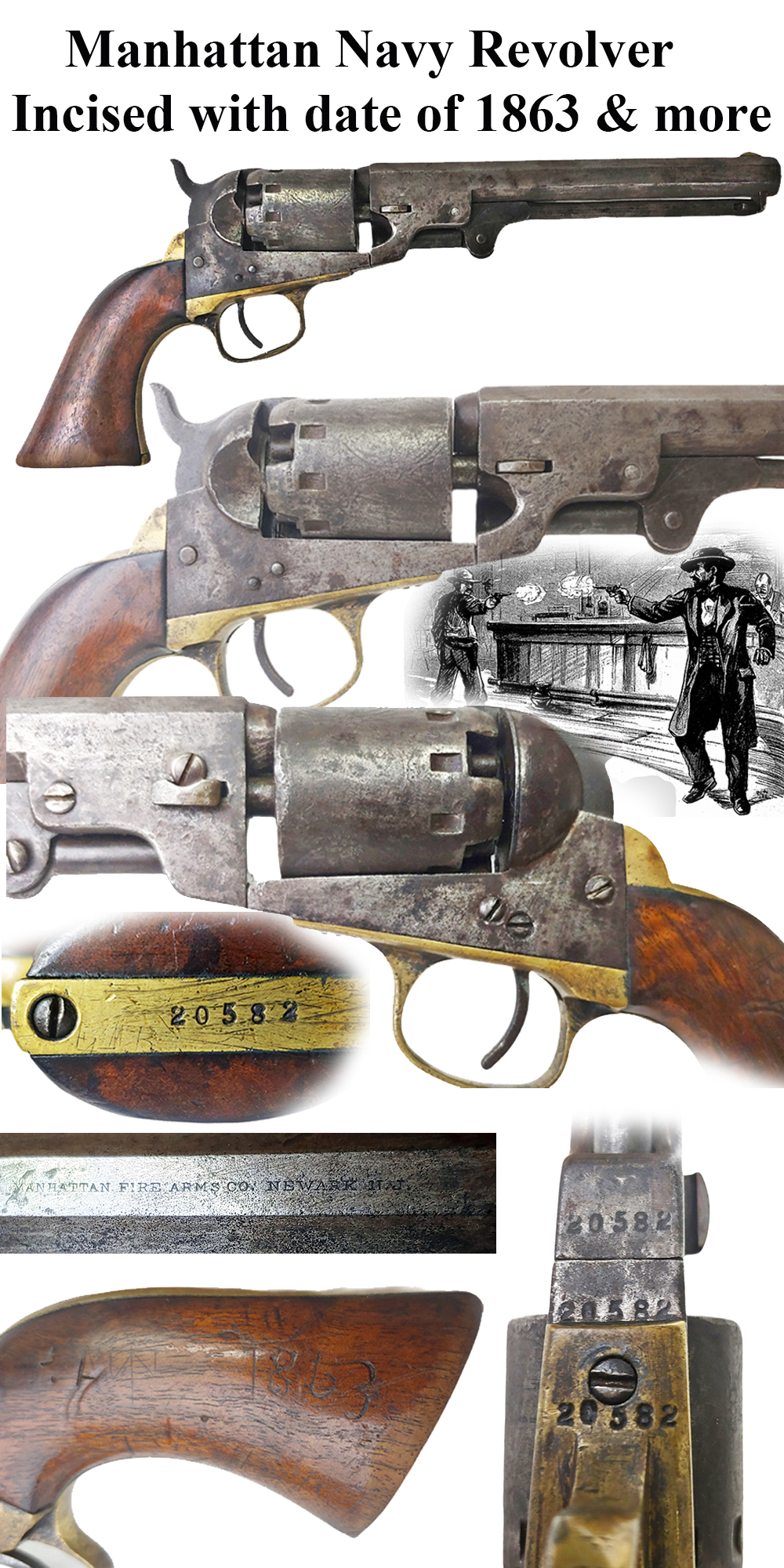 230118  Very solid Manhattan 36 Caliber Navy Revolver incised by the owner in 1863.  100% original except for the wedge screw, 100% complete, mechanically perfect.  Nice and tight.  The left grip is incised B A T 1863.  The brass butt strap has L.M.R. scratched into the corner.  The Manhattan Navy was a combination of features copied from Colt.  It has the stopping power of the 36 caliber Colt Navy but is closer in size to the lighter and smaller Colt Pocket revolver.  Rather than the 6-shot cylinder of the Colt, the Manhattan offered only a 5-shot cylinder.  They produced approximately 78,000 by the time the company went out of business in 1868.  All matching serial numbers and as honest as Old Abe.   $950.00 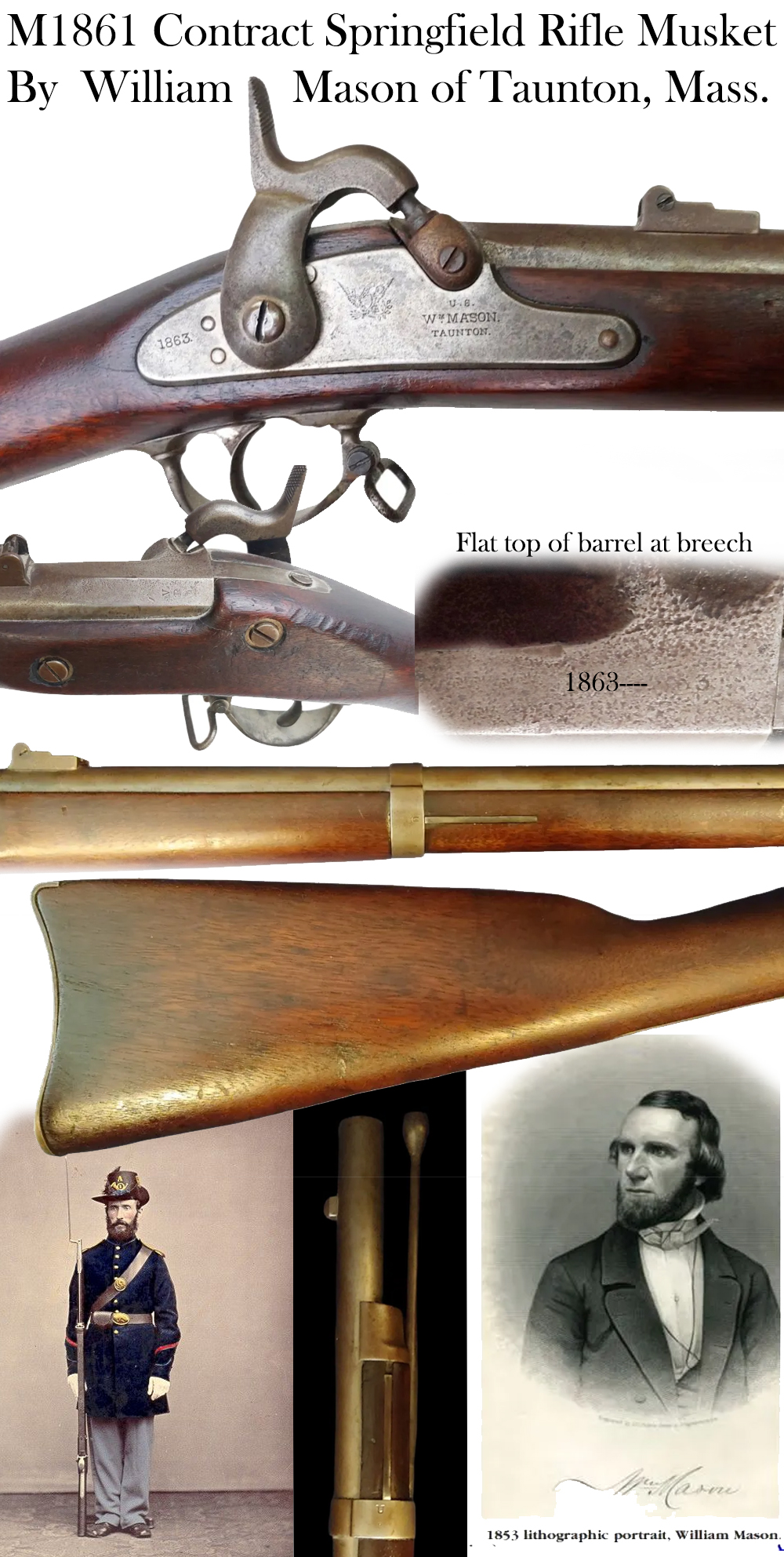 230119 US Model 1861 .58 caliber contract Springfield rifle musket in VG condition. 100% original, 100% complete and mechanically perfect. Lock is clearly stamped by contractor William Mason and dated 1863. Breech of barrel clearly inspector stamped with V P over eagle head. Barrel date of 1863 is partially visible mixed with light surface pitting. Mason had a contract for 100,000 muskets which the government later reduced to 30,000 in an underhanded move by a review board instructed to alter arms contacts in an effort to conserve money in the war chest. This nearly bankrupted Mason who had laid out over half a million dollars for materials to produce 100,000 guns.

Wood is very good with attractive color and good edges. It shows expected handling wear. There is enough wear that I cannot decipher a cartouche. Metal is VG+ overall smooth with gunmetal grey patina. The area around the nipple shows light surface pitting. Lock action is crisp as new. No replaced or repaired parts.  $1,250.00

Here is a link to an excellent monograph on Mason muskets by Paul Johnson. 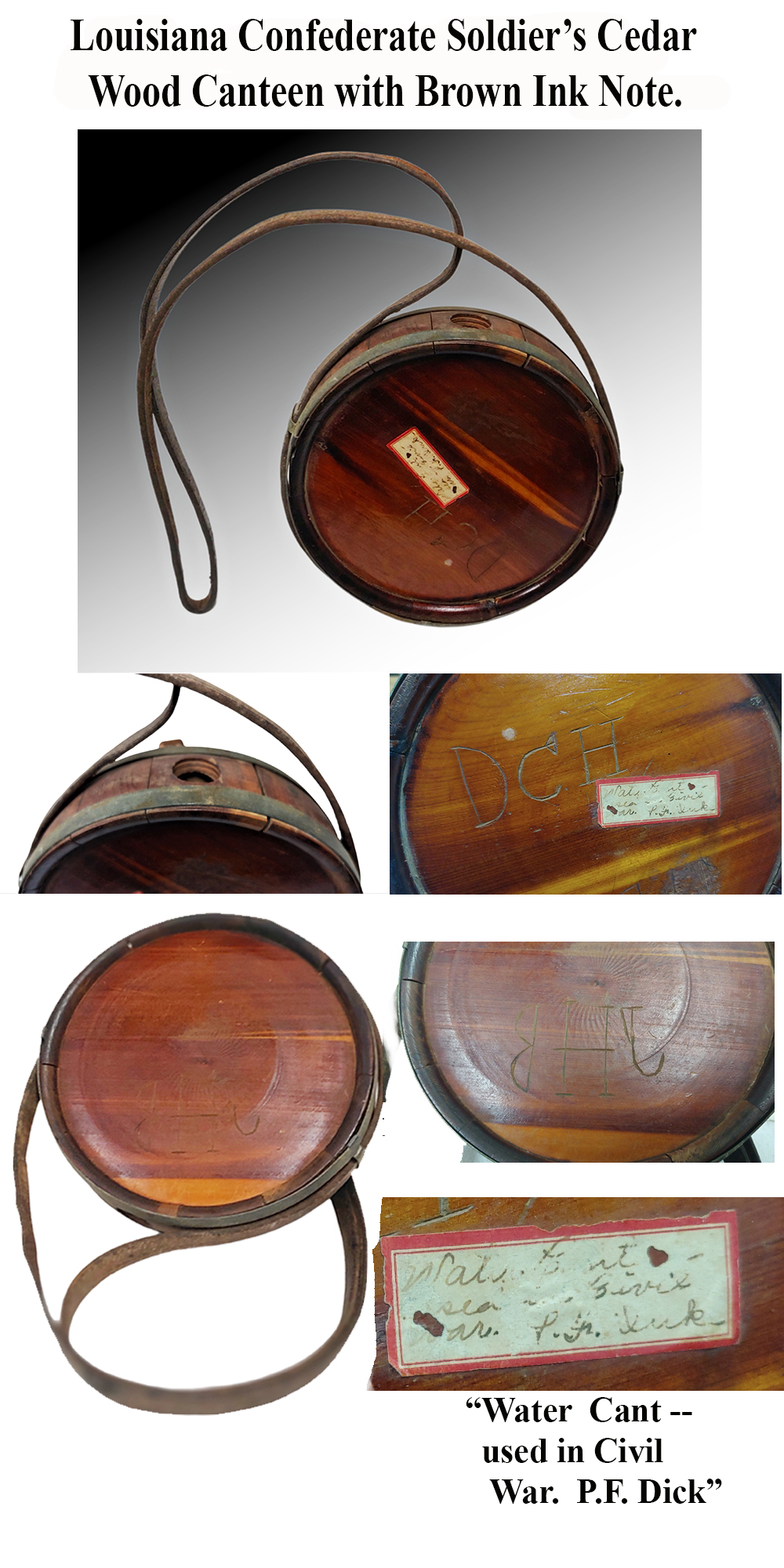 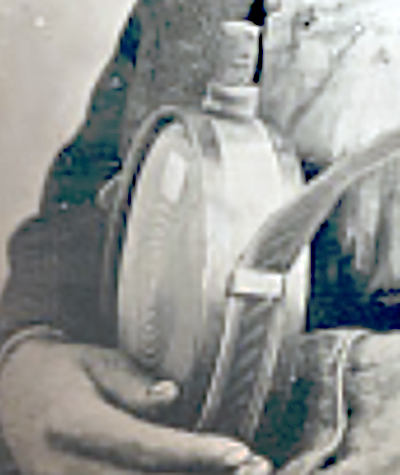 230101  EXCELLENT CONFEDERATE CEDAR WOOD DRUM CANTEEN:   Fresh to the market and very handsome.  I purchased this last August from a restaurant owner in Louisiana who had acquired it locally.   It looks to have had several owners, one severely dyslexic.  Prominently visible is an old brown ink tag which reads -“Water  Cant – used in Civil War by P.F. Dick”  Carved into the wooden faces are three sets of initials. Above the paper tag is DCH.  On that same side are three more initials nearly completely obliterated except for the last letter D.  The other face is incised in near comical dyslexic form… backwards B  then an H  then a backwards J.  In researching the Confederate soldier database there are only three soldiers named P. Dick (plus one named P.P.Dick).  All three listings for P. Dick are for a Peter Dick from Louisiana.  Whether this is one man who served in all three units or three different Peter Dicks I do not know.   I searched ALL Confederate soldiers with first initial “P” and a last name that begins with “D” and ends with “K”.  Eleven fit that bill, only the three Peter Dicks had four letters in the surname as shown on the tag.  The three listings are for soldiers serving in the following regiments.  17th Louisiana Infantry 1861,  25th Louisiana Infantry 1862,  and Louisiana Fire Infantry date not stated.  The leather carrying strap was attached in the early 1900s based on the appearance of the leather.  It is very old, but is not the original 1860s strap used by Peter Dick.   Didn’t sell last Tuesday at $2,250.00…  How about $1,875.00  That’s a Deal… 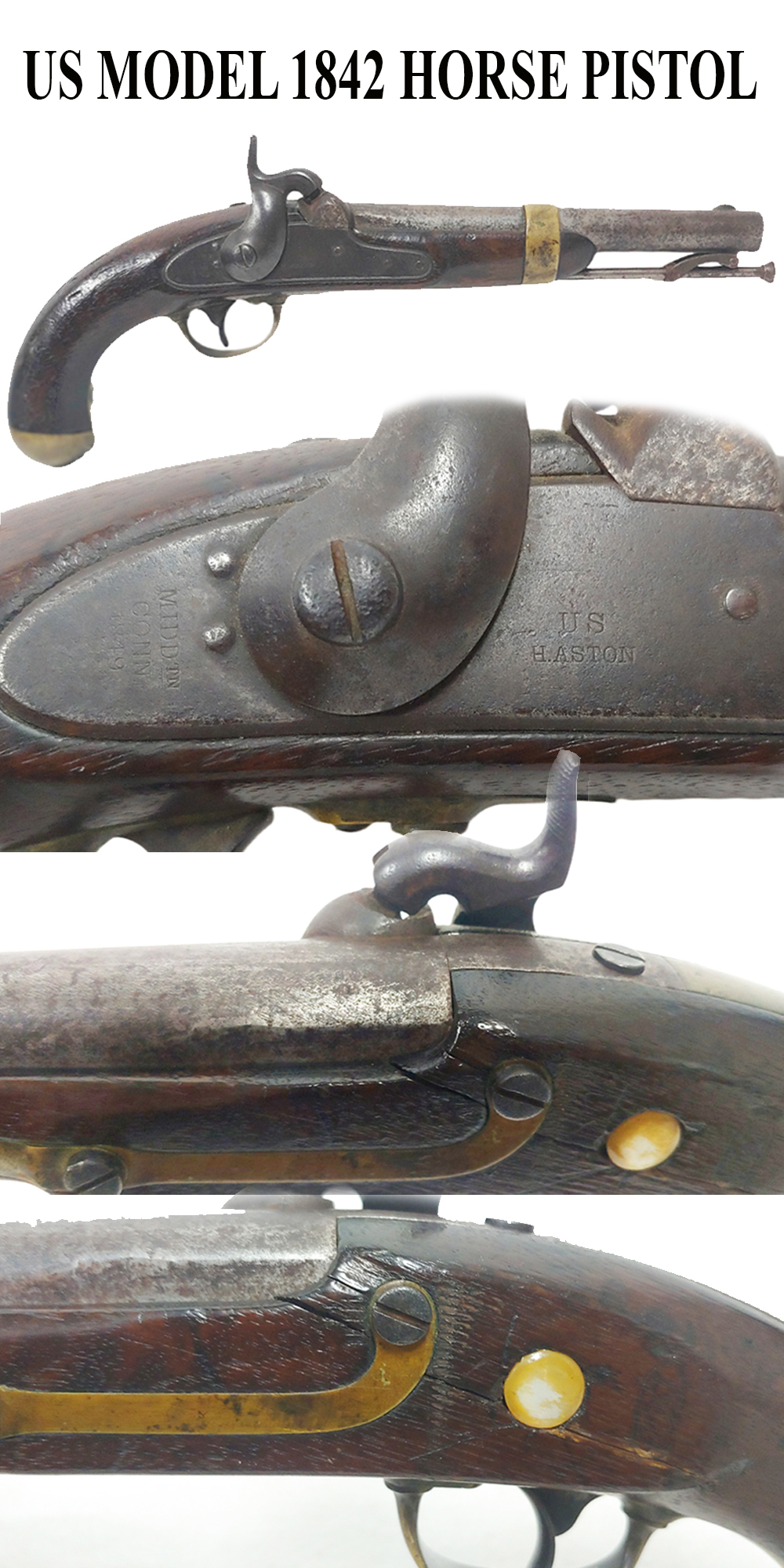 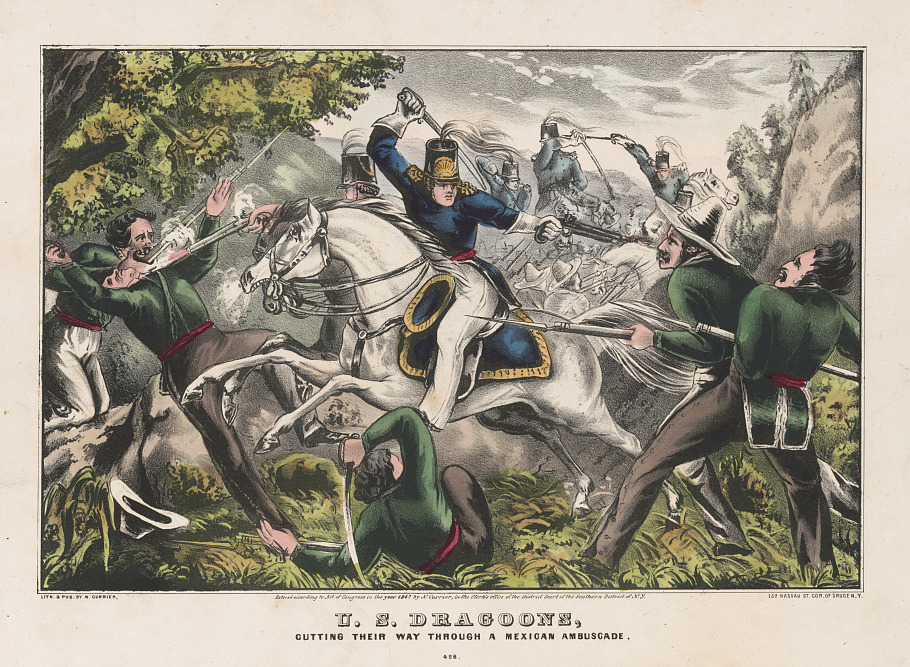 230204  MODEL 1842 U.S. ASTON PERCUSSION PISTOL…
One of the great affordable antique US martial pistols available to collectors. This is an 1849 dated Model 1842 percussion pistol by Henry Aston. Lock markings clearly legible: US over H. Aston forward of the hammer and Middtn/ Conn/ 1849 to the rear.   Wood is overall good but has a crack and inlaid disc on the left side.  Brass has mellow aged patina. Some dings to the butt cap. Some light pitting to the bolster. Barrel markings are very worn.  Barrel is a mix of gray and brown spots.  Sight and rammer assembly are present and good. Action good. Nipple shows signs of use but is not battered. A solid example of the US regulation pistol for dragoons on the Western frontier and Texas. Many of these were in state arsenals at the beginning of the Civil War and are often recorded in early issues to southern volunteers. What else can we buy with such wonderful looks, great age, and a solid connection to American frontier history for the inconsequential price of…  Didn’t sell Tuesday at $695.00… let’s try $595.00 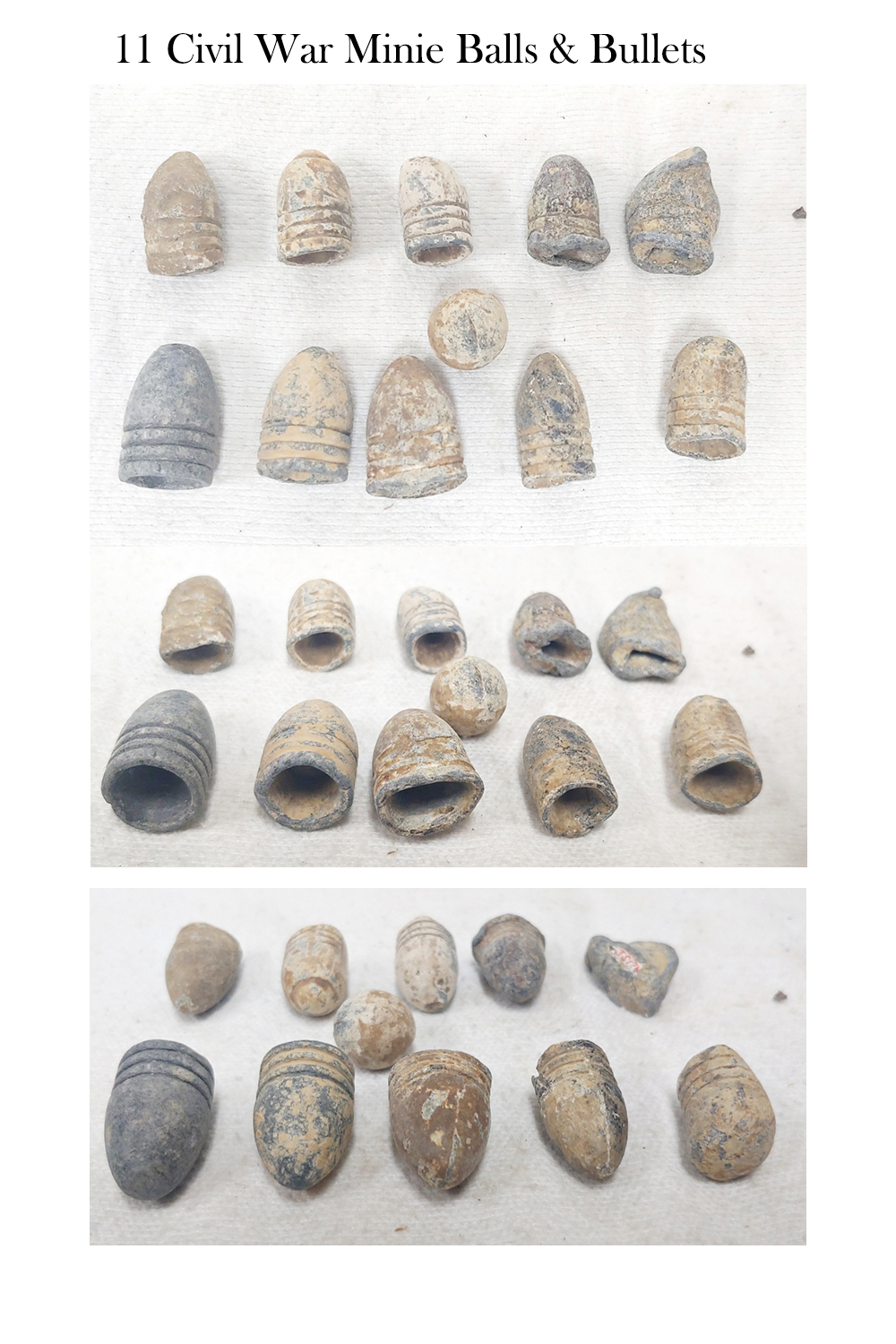 230105  Dug-up Civil War Bullets…  The three at bottom left appear to be 72 caliber minie balls. The next looks like a carbine bullet, and the far right bottom is a 50ish ? cal three ring something.  Round musket ball in center.  Top row looks to be 58 caliber fired 3-ring minies.   Eleven Civil War bullets.  The giant minies are darn scarce.  didn’t sell Tuesday at $35.00…. let’s try $20.00 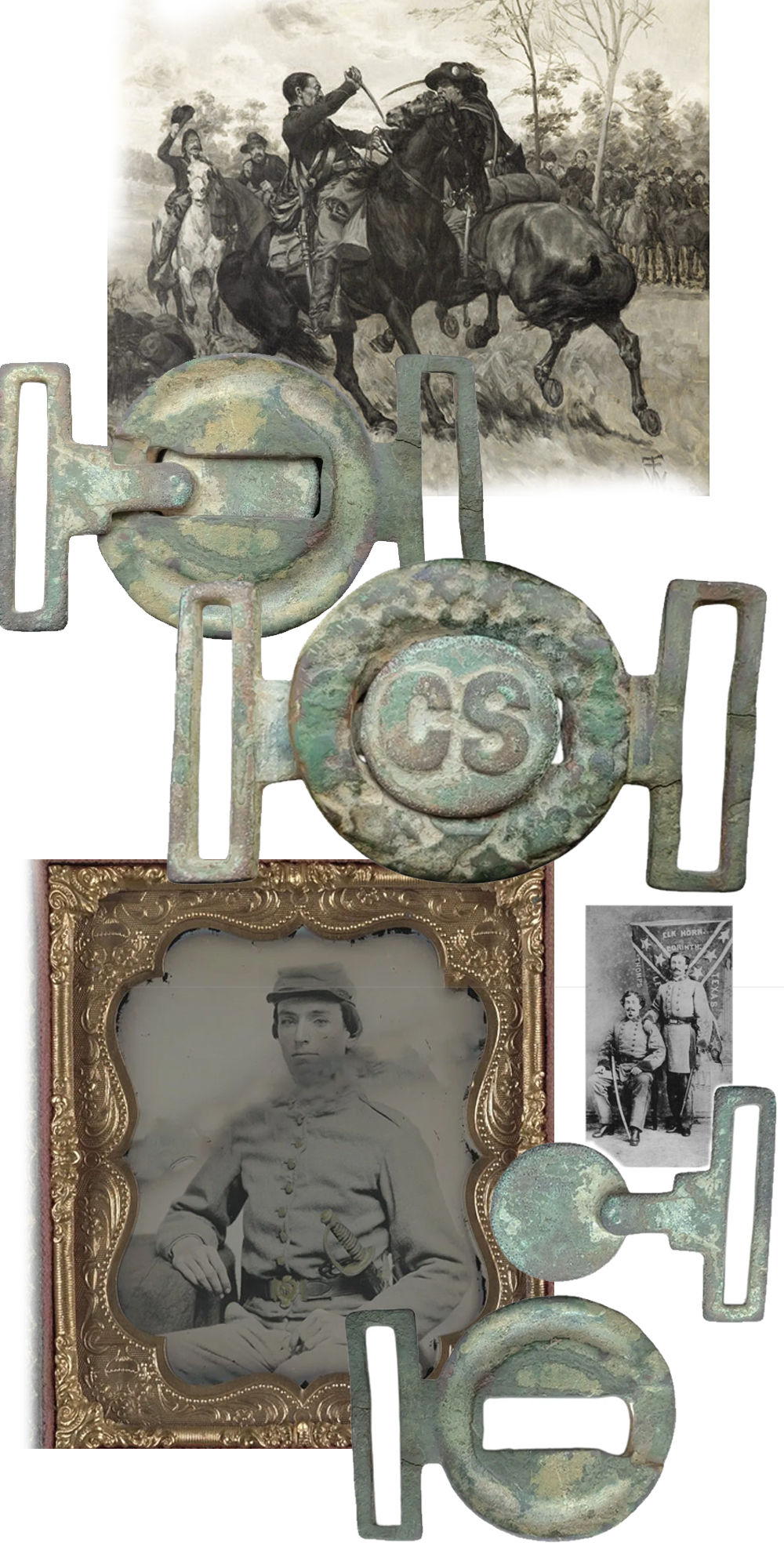 230107  CONFEDERATE BUCKLE   An outstanding excavated (dug up, metal detector find) Johnny Reb western theater coin style tongue and wreath CS sword belt plate.  This style is strongly associated with the Army of Tennessee. Shades of Nathan Bedford Forrest and his critter cavalry. Dead real, small conservation repair to a tiny crack if you look closely. (This pattern almost always has the tiny crack.) Also shown is a photo illustrating a Confederate soldier wearing a similar buckle.  didn’t sell Tuesday at $2650.00   How about $2,350.00? 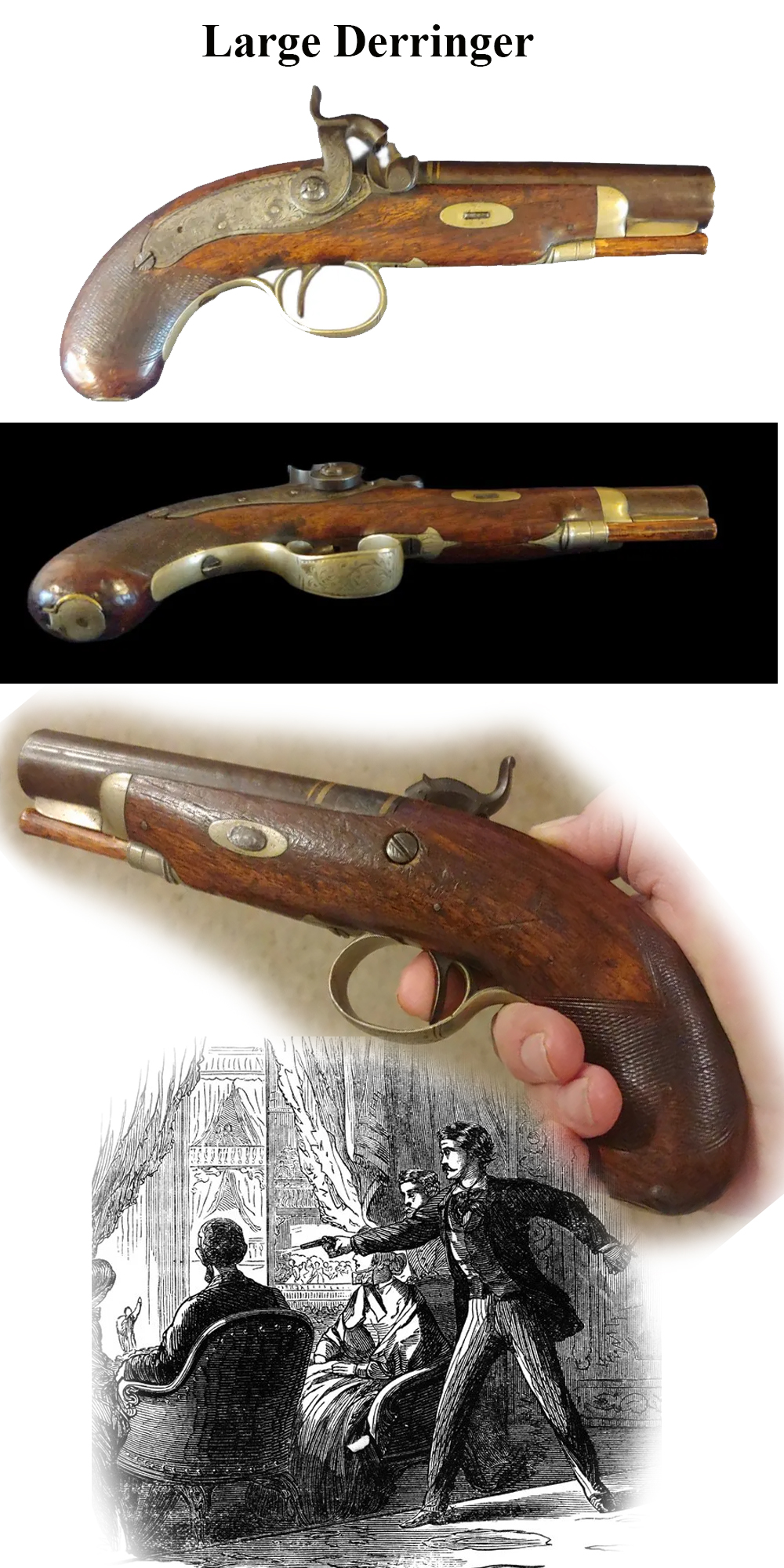 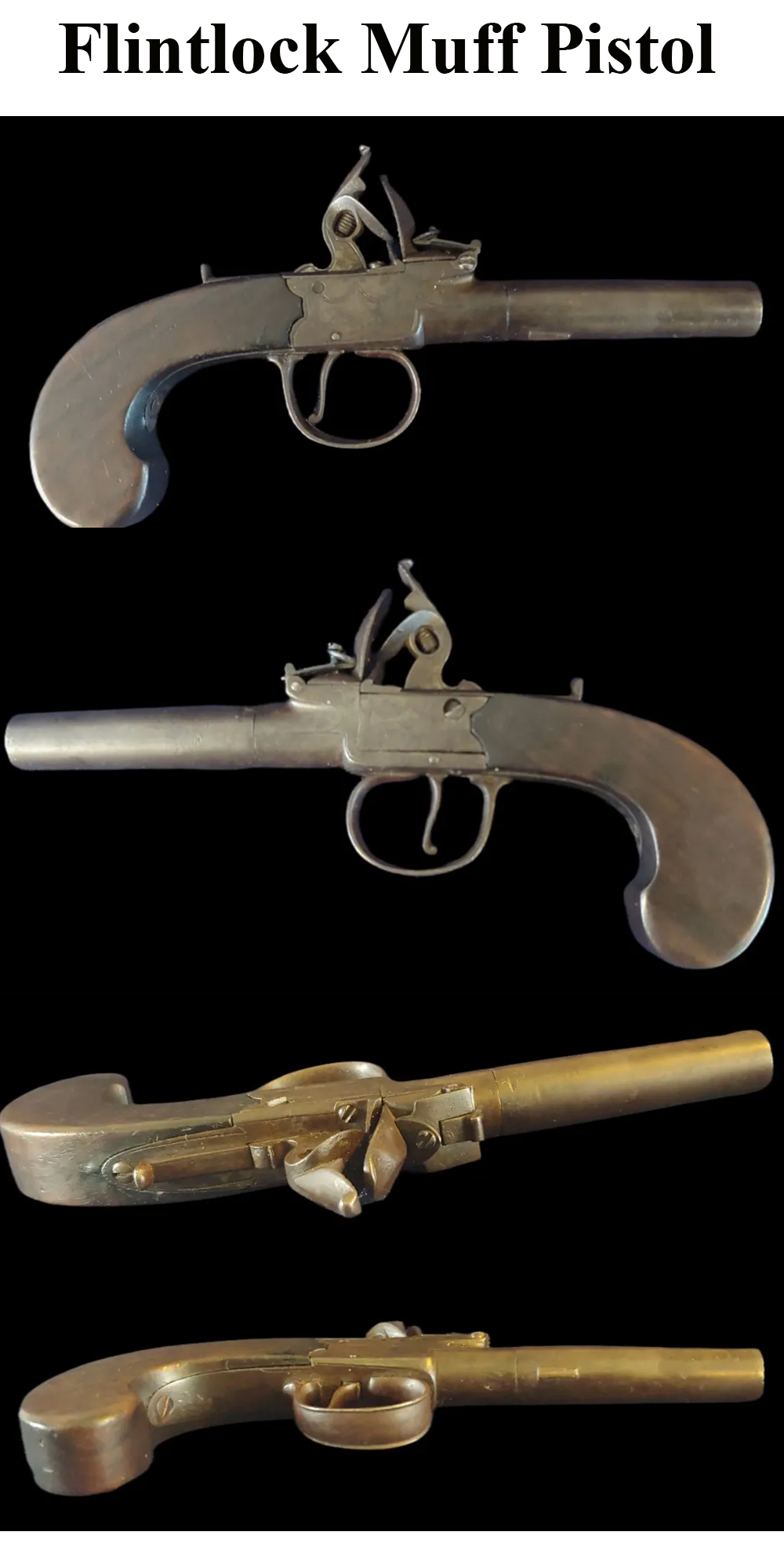 230110   FLINTLOCK MUFF PISTOL:  English flintlock pocket or muff pistol. 6 inches overall. 40 caliber. Missing top jaw and jaw screw is broken with bottom half still attached. Wood is very good. Metal is steel grey. No finish remains.  This is a perfect Winter project to restore the top jaw.  Where are you going to find another 200 year old real flintlock pistol for this price   $450.00  Discount to 375.00 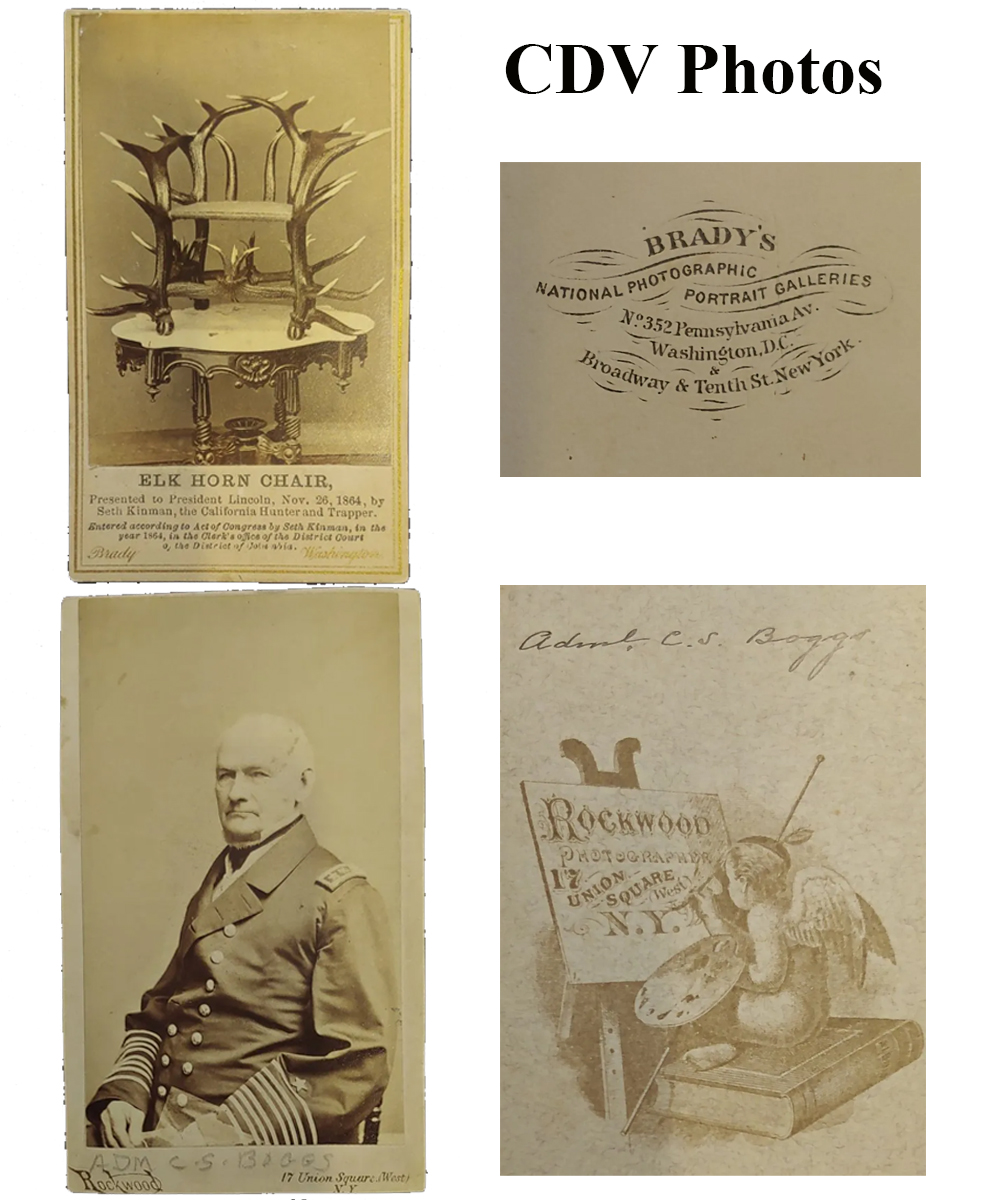 230112 CDV PHOTO ADMIRAL BOGGS:  Rear Admiral, USN, (1811-1877)Charles Stuart Boggs was born in New Brunswick, New Jersey, on 28 January 1811. He was appointed a U.S. Navy Midshipman in November 1826 and was assigned to the Boston Navy Yard until 1830, when he began two years at sea on board the brig Porpoise. For the rest of the 1830s and the 1840s he had duties ashore and afloat, receiving his commission as Lieutenant in 1837, while serving in the ship of the line North Carolina. He was an officer in the steamer Princeton during the Mexican War and executive officer of the frigate St. Lawrence in 1851. Promoted to the rank of Commander in 1855, Boggs commanded two mail steamers during the next four years and was a light house inspector at San Francisco California in 1860-1861.In December 1861 Boggs was given command of the gunboat Varuna, fighting her with distinction during the attack on New Orleans the following April. Receiving his Captain’s commission in July 1862, during the rest of the Civil War he was commanding officer of the steam sloops Juniata and Sacramento, with the North Atlantic Blockading Squadron, the steam cruiser Connecticut in the West Indies, and had special duty at the New York Navy Yard.In 1866-1868 Boggs commanded the steamer DeSoto. As a Commodore, he had another tour of light house inspection service in 1869-1870, receiving promotion to Rear Admiral during this time. His final seagoing service was as commander of the European Fleet in 1871. Retired in January 1872, he remained on duty as Secretary of the Light House Board until mid-1873. Rear Admiral Charles S. Boggs died at New Brunswick, N.J., on 22 April 1877.   $100.00   Discount to 75.00