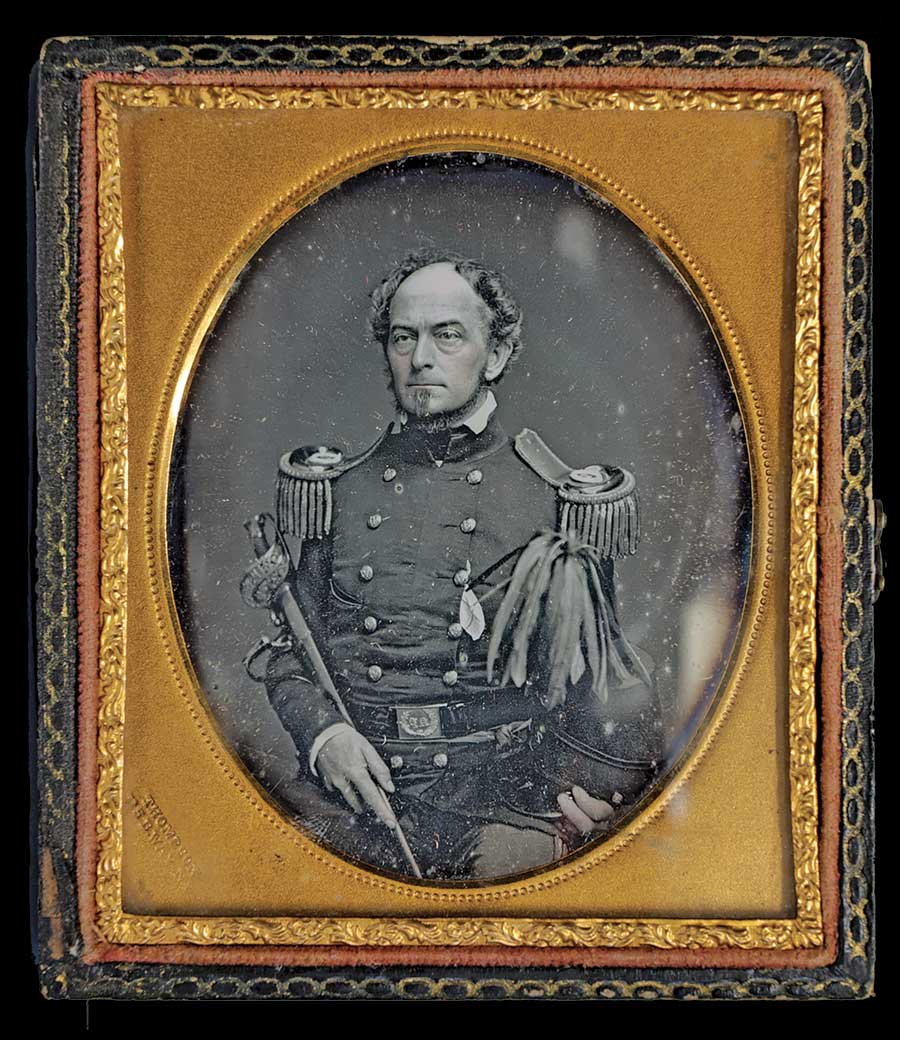 The lot includes a superb military Daguerreotype of a New York Major as well as ambrotype images of his sons in uniform during the Civil War.

The first image in the lot is a SUPERB …CRYSTALLINE …pre-war daguerreotype
of Major Samuel S. Parker, 7th New York State Militia in 1855,
showing every kind of military detail you could want.

Major Parker holds his 1851 pattern shako with plume and number 7 visible on the front,
and cradles an 1850 Staff and Field Officers Sword, the US in the guard facing the camera.
The clarity is so sharp that not only is Old-English NY officer’s belt plate legible,
even his Eagle-I infantry officer buttons are obvious to the viewer.

Daguerreotypes offer a clarity and resolution unmatched by any other form of antique photography, and this dag of Parker exhibits all of this.The next two images are a pair of sharp ambrotypes of his sons Samuel, Jr., and Sewell Parker, both of the 87th and the 40th New York, the Mozart Regiment. His two sons are posed like one another seated and leaning on an overcoat with a forage cap at their elbows. Both wear early war NY regulation pattern volunteer jackets with 8 buttons and piped collars and shoulder tabs. 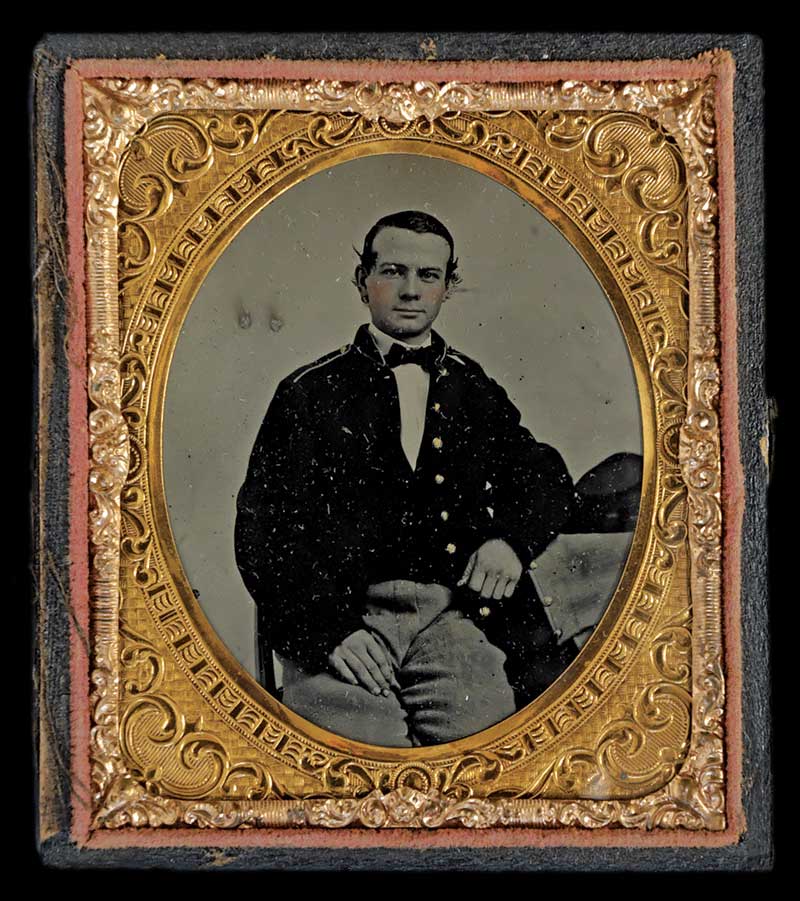 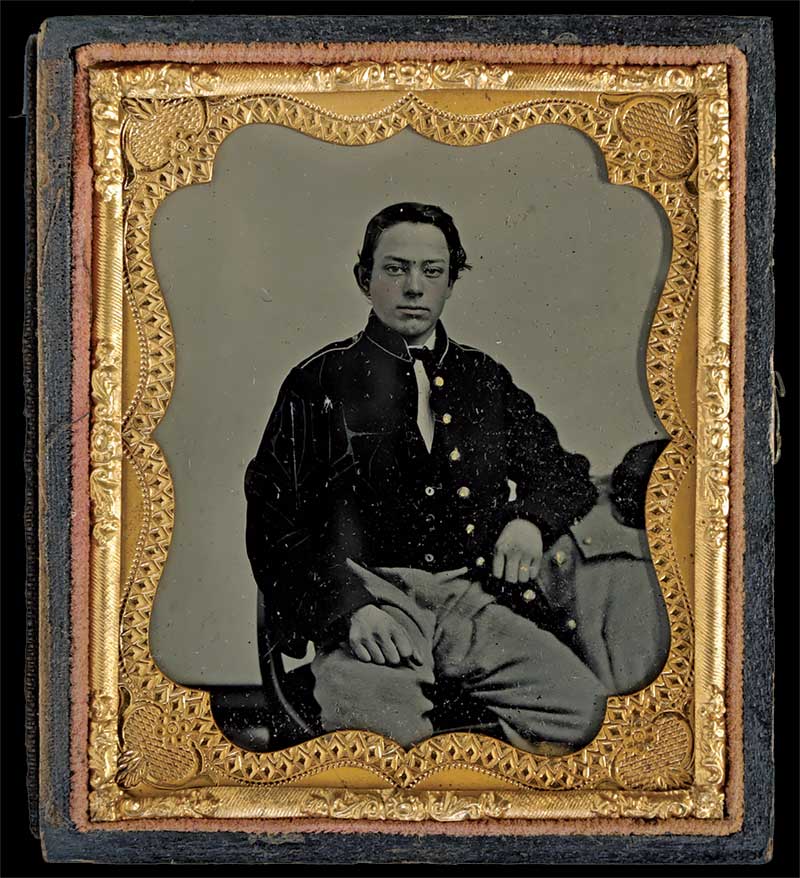 The 87th NY was organized in Brooklyn by consolidating a number of units with the Brooklyn Rifles, a large number of whom had been in the 13th NY State Militia, in November, 1861. The regiment ended up in Jamison’s brigade of the 3rd Corps and fought on the Peninsula and the 2nd Bull Run Campaign, losing 1 officer and 19 men killed in action and another 9 mortally wounded in various engagements. The regiment as a whole was transferred to the 40th NY in September, 1862.

The 40th New York was another NY City regiment and was known as the “Mozart Regiment” at the request of the Mozart Hall Committee, a city political organization. At the time the Parker boys joined it, the regiment was in the 1st Div. 3rd Corps, and would see some hard fighting. At Fredericksburg they lost 25 killed in action, at Gettysburg 23, and another 14 mortally wounded.

In March, 1864, the regiment went into the 2nd Corps, and continued to see hard campaigning, fighting and losing men at the Wilderness, Spotsylvania, the North Anna, Petersburg, etc. By the time the regiment mustered out in June, 1865, 159 of its members had been killed in action and another 78 mortally wounded.

Most of the time these family groups have been split up and sold anonymously. Here is a chance to acquire quality images of one family with the identifications preserved.

This lot of historic New York military images is among the best I’ve owned.

The dag’ is absolutely spectacular.