In this week’s net price WebCat we are offering several guns from an ancient local collection.  The old collector’s storage place left a lot to be desired and the metal surfaces have suffered some from rust.  Each one has its own despite the oxidation… prices are livable, and the wood is superb.

20-02-17  This Remington 44 caliber army revolver turned up in this rebel holster and has been with this holster since its time of use.   Gun is standard New Model in Very Good++ condition.  100% original, 100% complete, and mechanically perfect.  Steel surfaces are nicely age patinated.  There are some light areas of roughness.  Markings are legible.   The grips are superb with wonderful inspector’s cartouche clearly visible.  Serial number 83,083 with matching last four digits on the rear of the cylinder.  This number is middle range for the New Model which is known with numbers ranging from 20,000s range to 140,000s range.  A good solid wardate revolver made in 1864.

Coolest thing is that it came in this classic rivet-free Confederate sewn construction full flap army holster.  Either a Yank captured a holster, or a Reb captured a revolver.  The set turned up in Michigan.    Holster is in poor condition which the photographs show you clearly.  The gun is very nice and displays great with the Johnny Reb leather.  $1,295.00 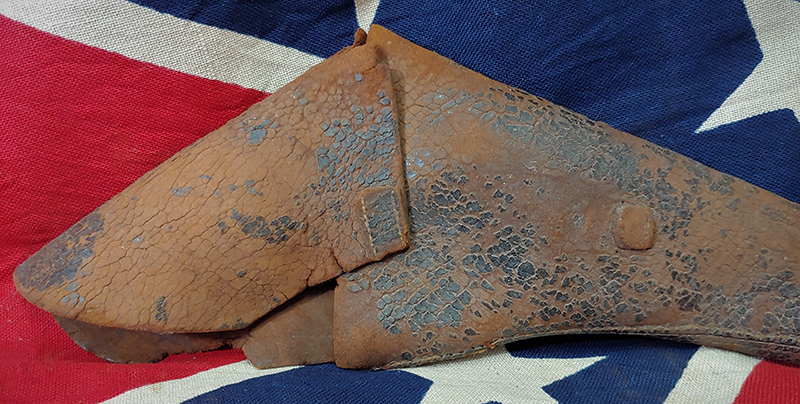 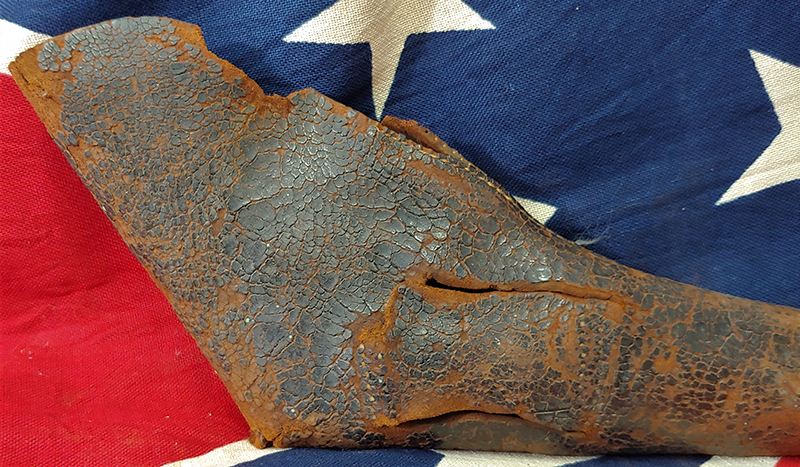 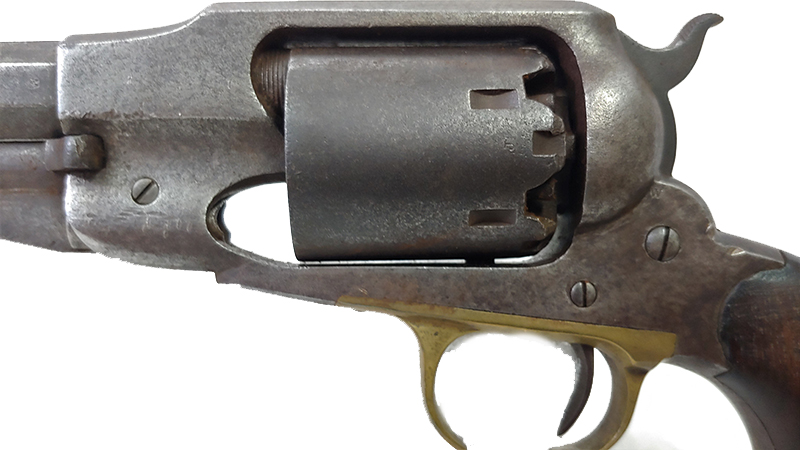 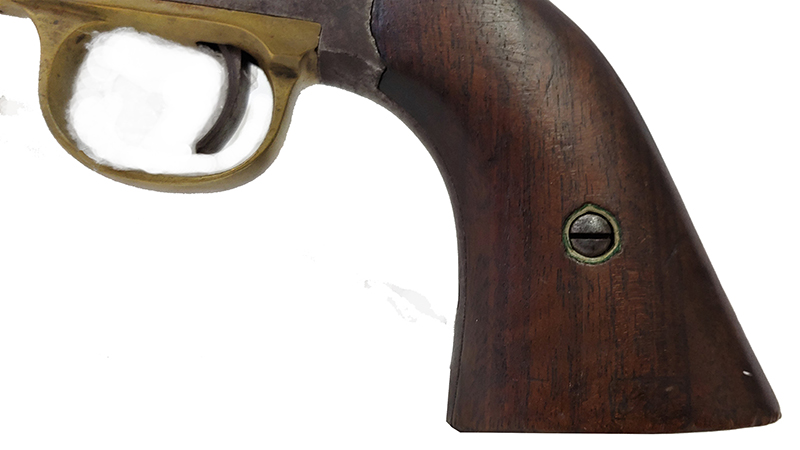 These scarce little buttons are stamped with the state seal of Michigan, and were made for officers of Michigan state units and are frequently found on documented CW uniforms from the low numbered regiments early in the war. These small size buttons have an empty shield in the center. The coat size buttons have a tiny hunter or soldier in the shield. Backmark:”SCOVILL MF’G. CO. / WATERBURY.” And an inner ring of dots, this is the abbreviated version of the Scovill series of depressed mark early 1860’s buttons. Albert MG4, Tice MG205As7.  A quick check of the internet shows me that Horse Soldier Shop and Union Drummer Boy Shop (both in Gettysburg) each have a coat size version of this button priced at $250.00  Horse Soldier shows they SOLD a small cuff / vest buttons at $100.  The cheapest I can find on the net is William Leigh,  CW Button Expert from Virginia and all around nice guy.  He has a Scovill marked small button like ours at $45.

20-02-19   I have had this little gem for fifteen years or more.  I got it way back when, from our late Boston friend Arthur Marchand   (Go Red Sox!).    Art got 90% of his stuff from Massachusetts and nearby New England estates.  This is most likely 45th Mass as the neighboring states did not produce that many regiments, and the 45th was organized in Arthur’s back yard.   It is a classic Civil War soft back embroidered infantry officer’s insignia.  A couple inches across give or take.  Velvet body, raw back, gold bullion thread, stamped numerals affixed with soldered wires.

The 45th Regt. was one of the new militia regiments raised in response to the call of Aug. 4, 1862, for nine months troops.   Organized at Camp Meigs, Readville, in the early fall of 1862, the first eight companies of the 45th were mustered in on the 26th day of September, and the other two, “I” and “K”, on the 7th of October.    On Nov. 5, the regiment embarked on the steamer MISSISSIPPI for Beaufort, N. C., arriving at its destination on the 15th. Transported by rail to Newbern, it was here assigned to Amory’s Brigade of Foster’s Division. The regimental camp was established on the banks of the Trent River near Fort Gaston. Here the 45th remained, following the regular routine of camp life, until Dec. 12, when it set out with Gen. Foster’s expedition to Goldsboro. Only eight companies took part in this expedition, Co. “C” having been sent on special duty to  Morehead City, and Co. “G” to Fort Macon.    At Kinston, Dec. 14, the regiment had its first taste of real war, losing 15 men killed and 43 wounded. At Whitehall, Dec. 16, it was again engaged, losing 4 killed and 16 wounded.  At Goldsboro on the 17th the 45th was not in action, and on the following day it began its return march to Newbern, arriving at its former camp Dec. 21.

On January 17, 1863, the 45th started on a reconnaissance to Trenton, returning on the 22d. From Jan. 26 to April 25 it served as provost guard in the city of Newbern. During this period, on March 14, occurred the Confederate attack on Newbern, of which the 45th was an interested spectator but was not called into action.  On April 27 it started with Amory’s Brigade on an expedition to Core Creek on the railroad toward Goldsboro. On  the following day it was sharply engaged, taking a Confederate work which crossed the railroad near its intersection with the Dover Road, and losing one man killed and four wounded.

This expedition being ended, the regiment returned to its last camp, near Fort Spinola, just below Newbern, on the Trent. Here it remained until June 24, when it proceeded to Morehead City, a suburb of Beaufort, N. C., and there took transports for Boston.  Arriving at its destination June 30, the regiment was formally welcomed, then proceeded to its old camp at Readville where it remained until its muster out of the service July 8.  $425.00 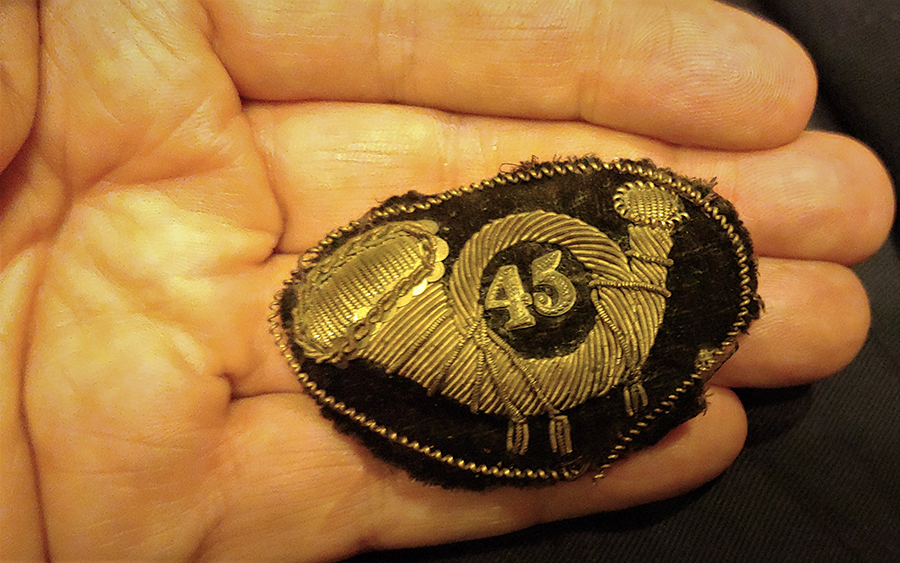 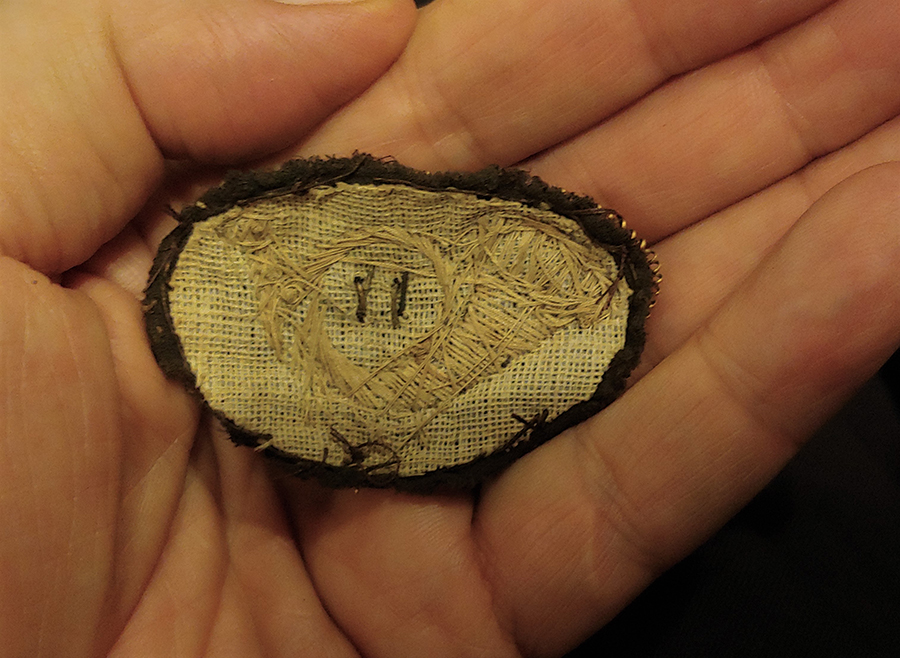 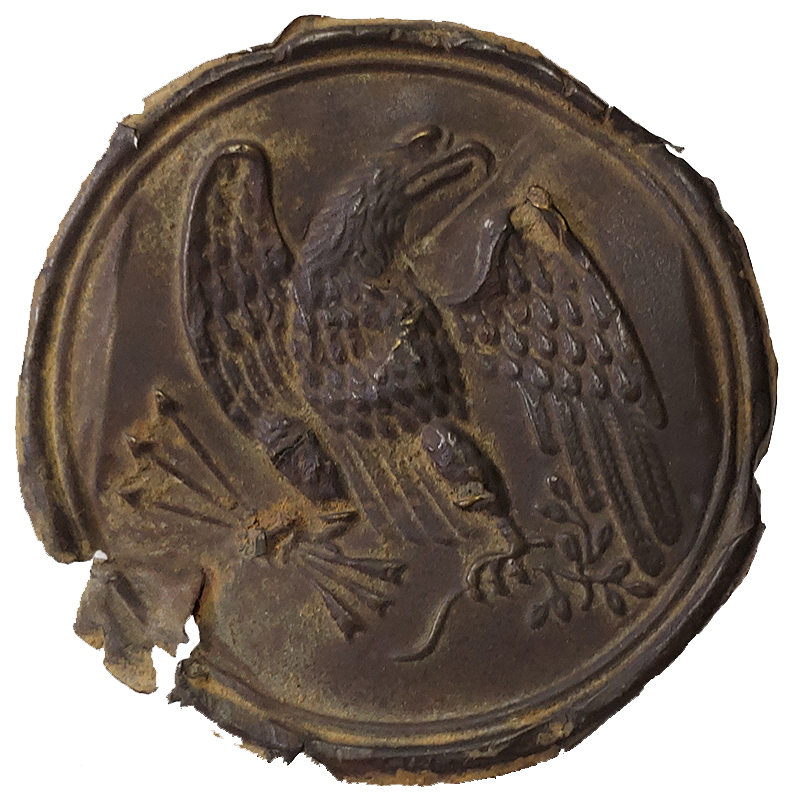 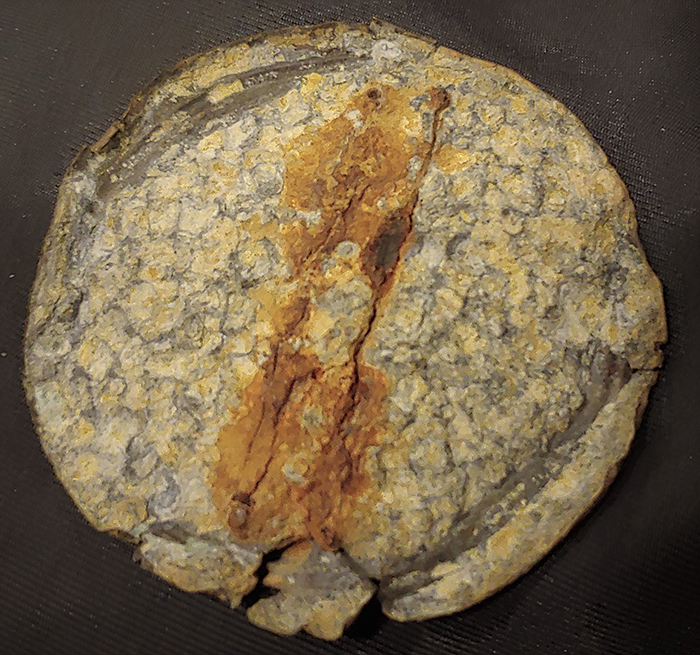 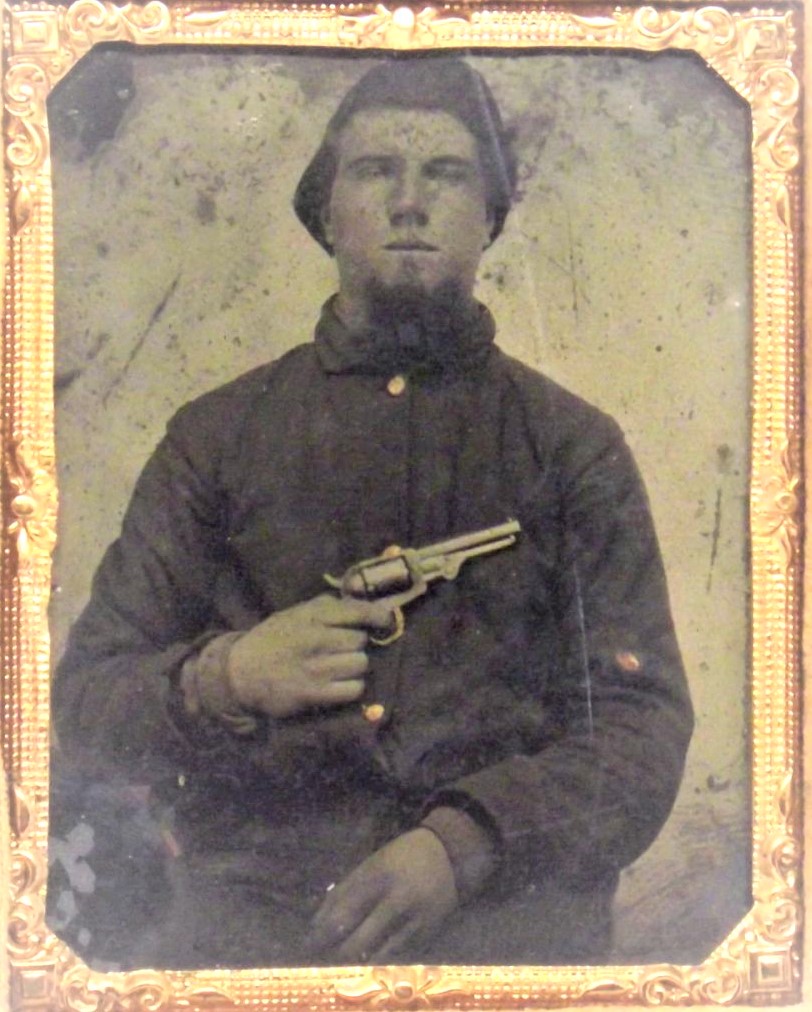 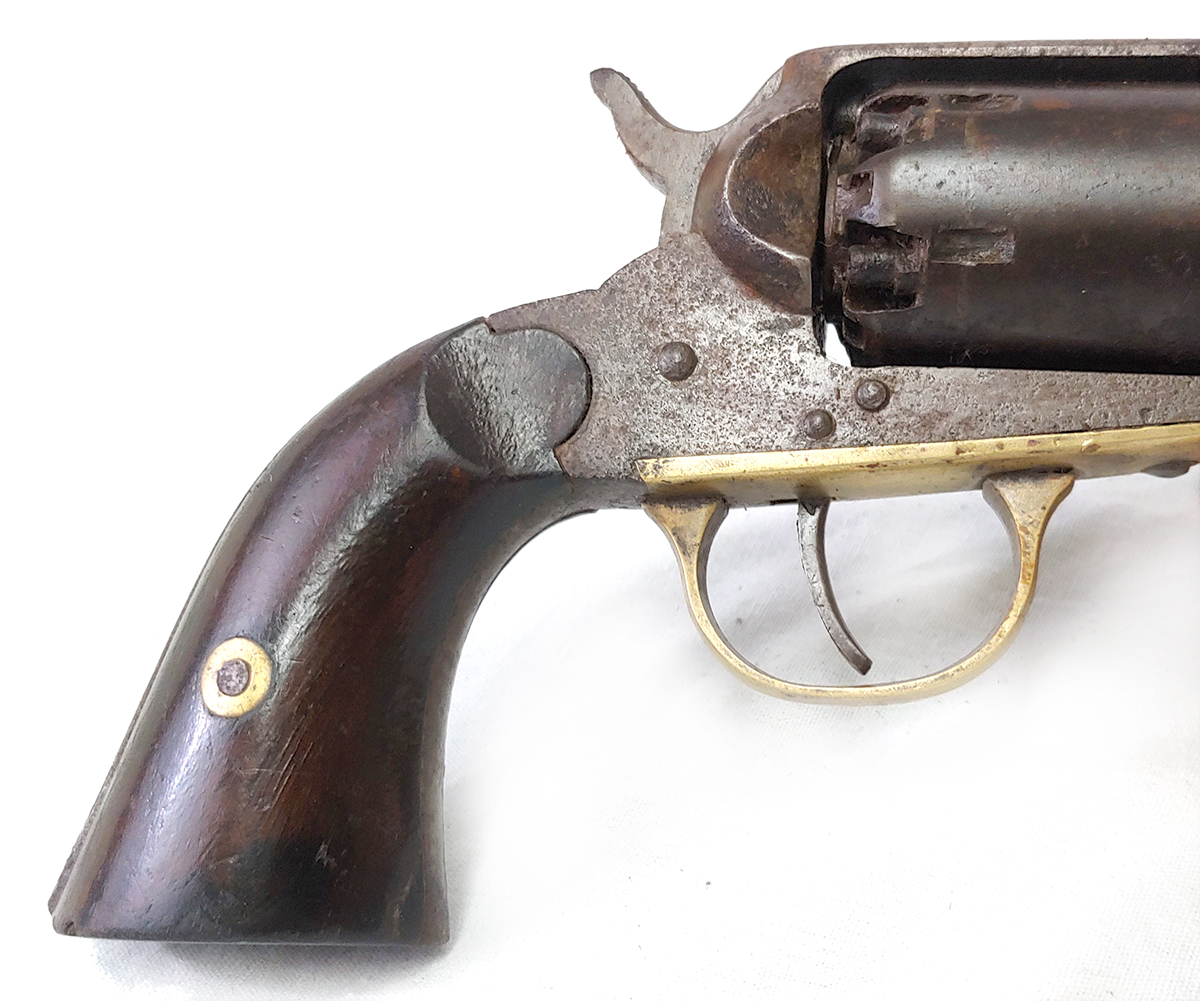 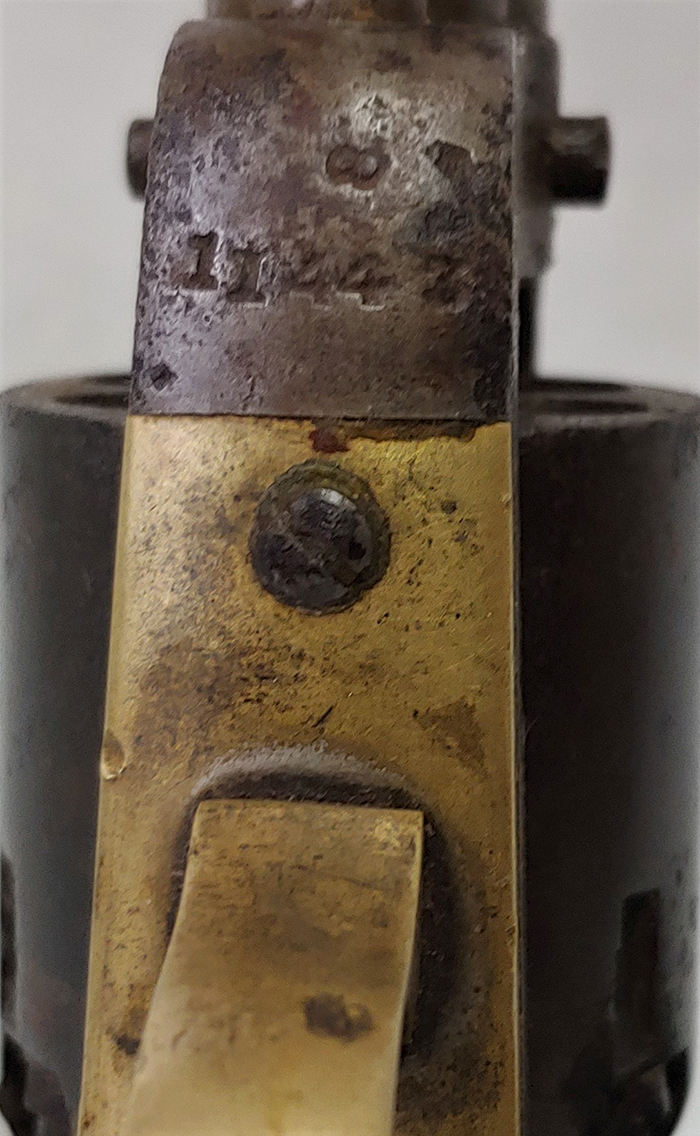 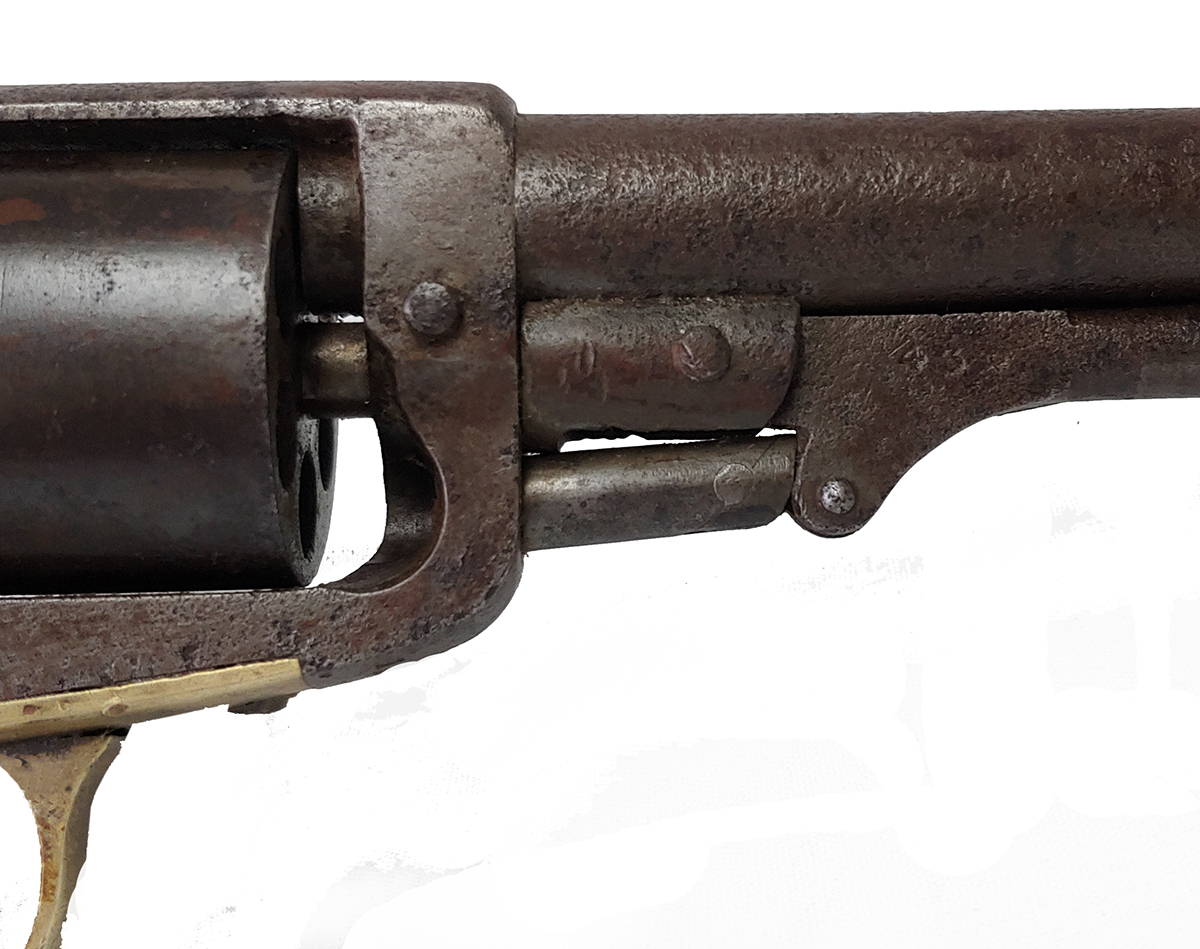 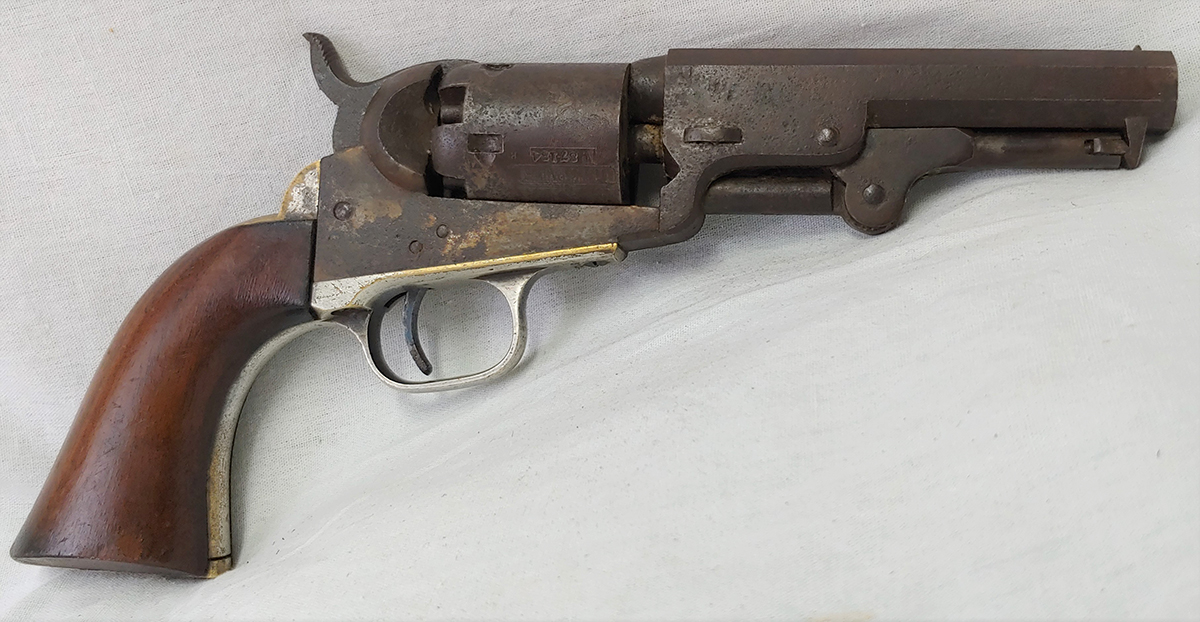 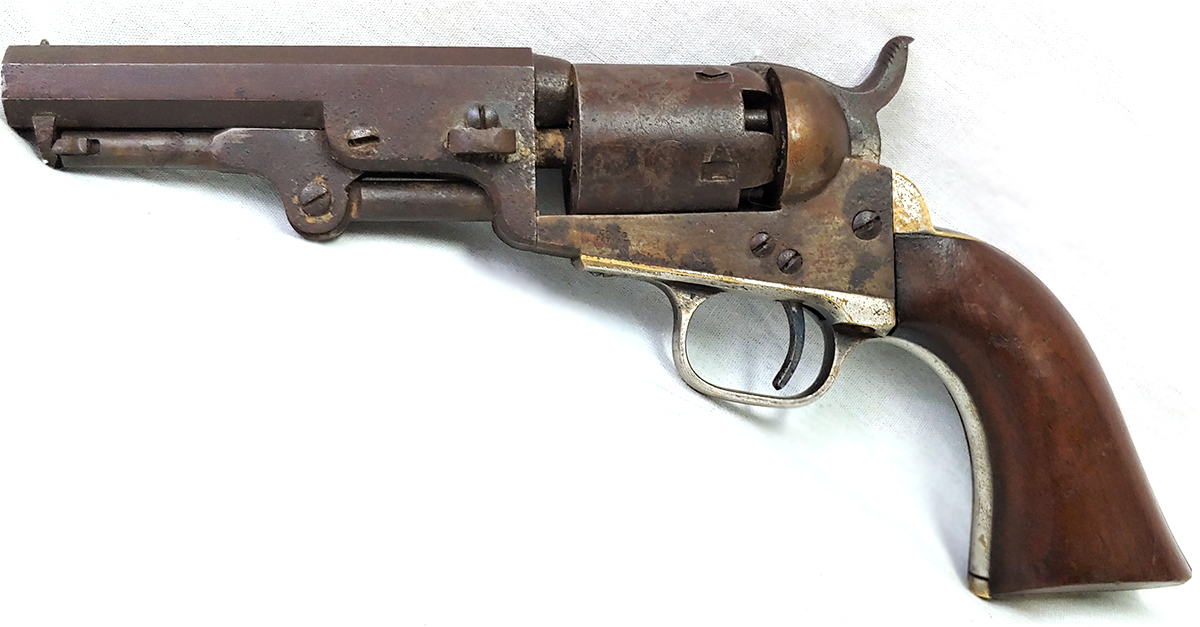 20-02- 23    Colt Model 1861 Navy Revolver .36-caliber, six-shot, single-action percussion made in 1864.  Essentially a scaled down version of the famous 1860 Colt .44 army revolver.   And one of the scarcest Colt models produced.  It incorporates the ratchet loading lever and round barrel.   Barrel length 7.5 inches. Total production less than 40,000 compared with over four times that number for both the 1851 navy model and the 1860 Army model revolvers. Overall good to very good condition. Steel surfaces are lightly pitted overall. All serial numbers 19,456 match. 100% original, 100% complete, and mechanically perfect, with the exception of the wedge and wedge screw which need to be replaced using proper examples.  Original grips are excellent.  The barrel legend is legible though mixed with rust and light pitting  $995.00 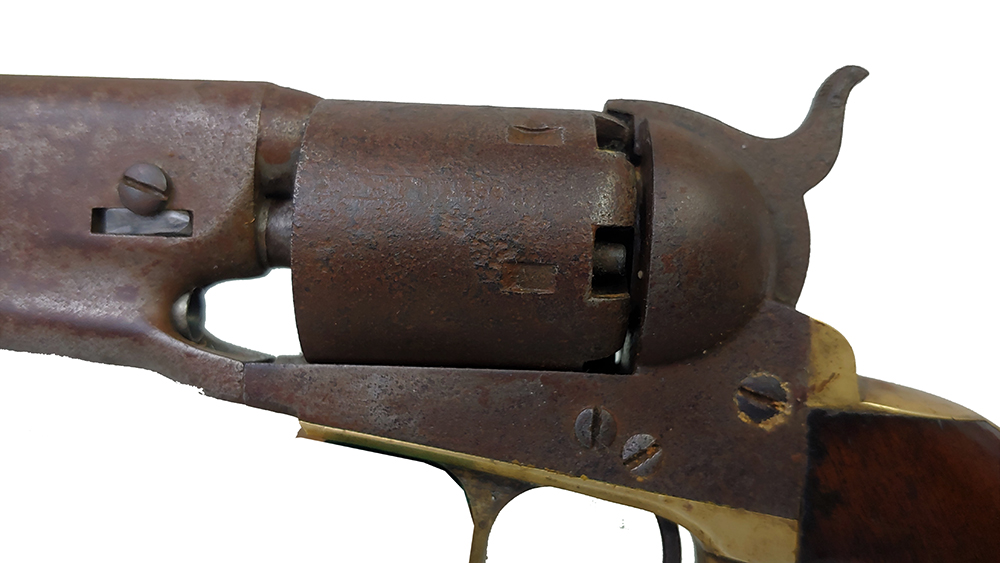 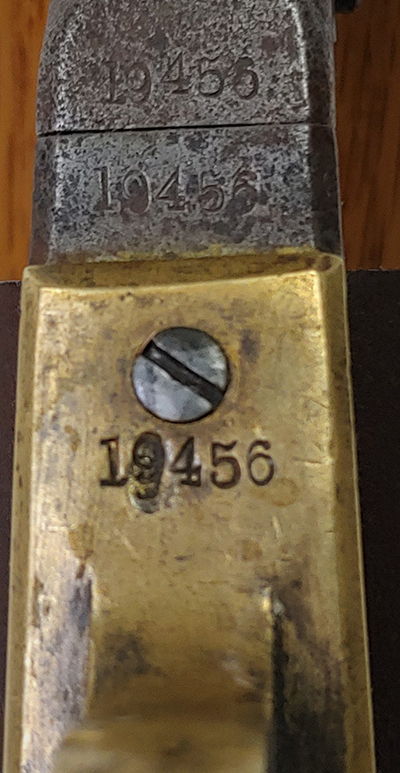 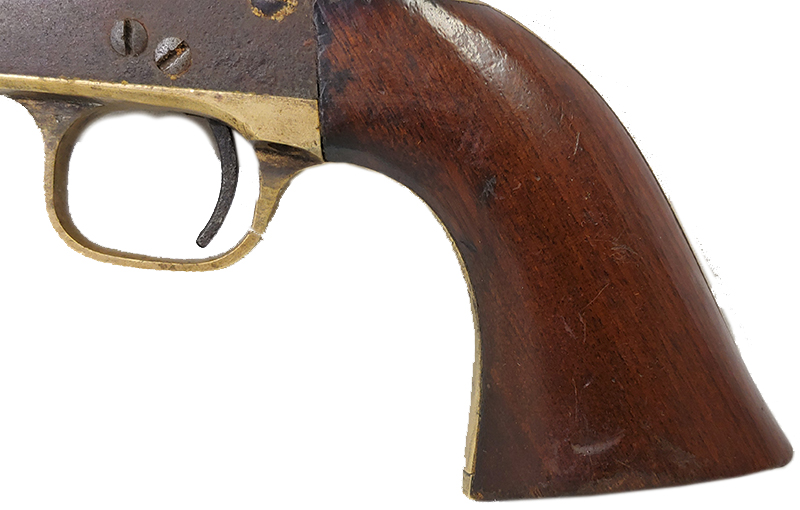 20-02-24   Gun is standard New Model Remington Army revolver in Good to Very Good condition. 100% original, 100% complete, and mechanically perfect. Steel surfaces are age patinated with light texture pitting evenly distributed. Markings are legible but weak.   The grips are beyond superb. They are incredible… NEAR MINT CONDITION with wonderful inspector’s cartouche crisply visible. These grips are fine enough to match a high finish example worth $3500 to $4,500. These super grips have to be worth darn near my price of the whole gun if someone needed minty grips. Serial number 93,064. I had to remove the grips to see the number. The loading lever is frozen shut with rust and I didn’t want to risk damaging it by forcing it open. I guarantee the barrel serial matches.   This number is middle range for the New Model which is known with numbers ranging from 20,000s range to 140,000s range. A good solid war-date revolver made in 1864. $1,150.00 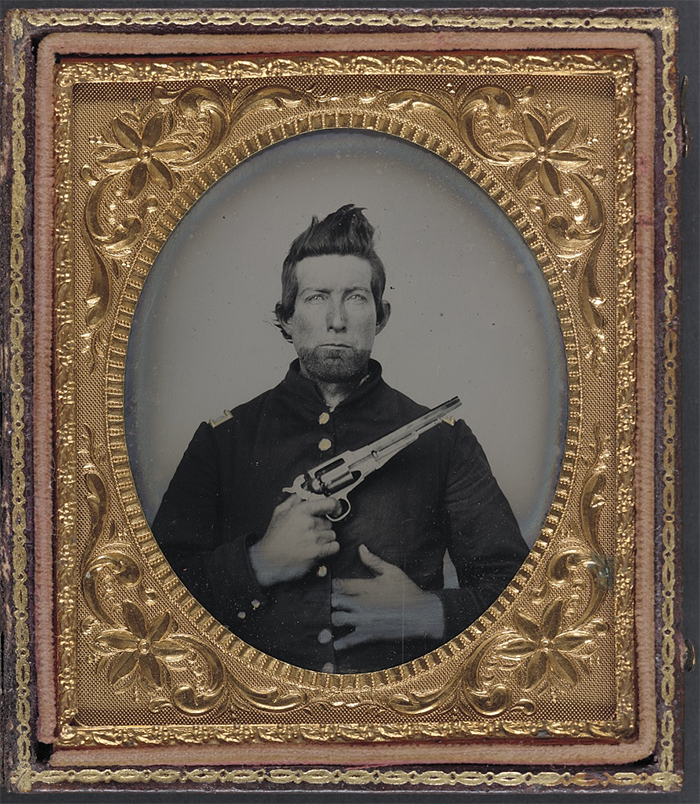 The above soldier photo is to illustrate the use of the Remington Army Revolver.  It is not available for purchase. 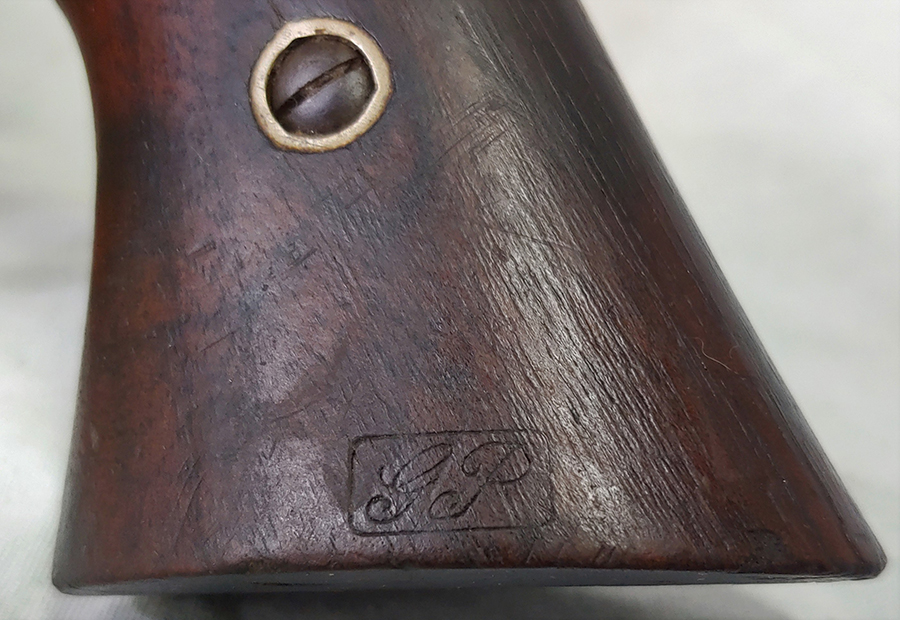 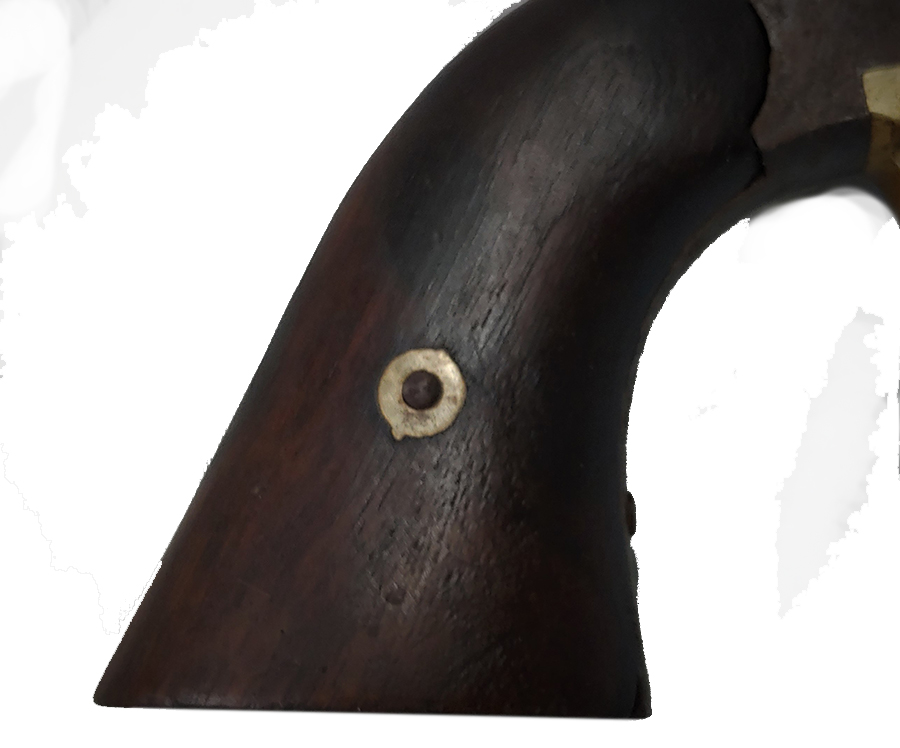 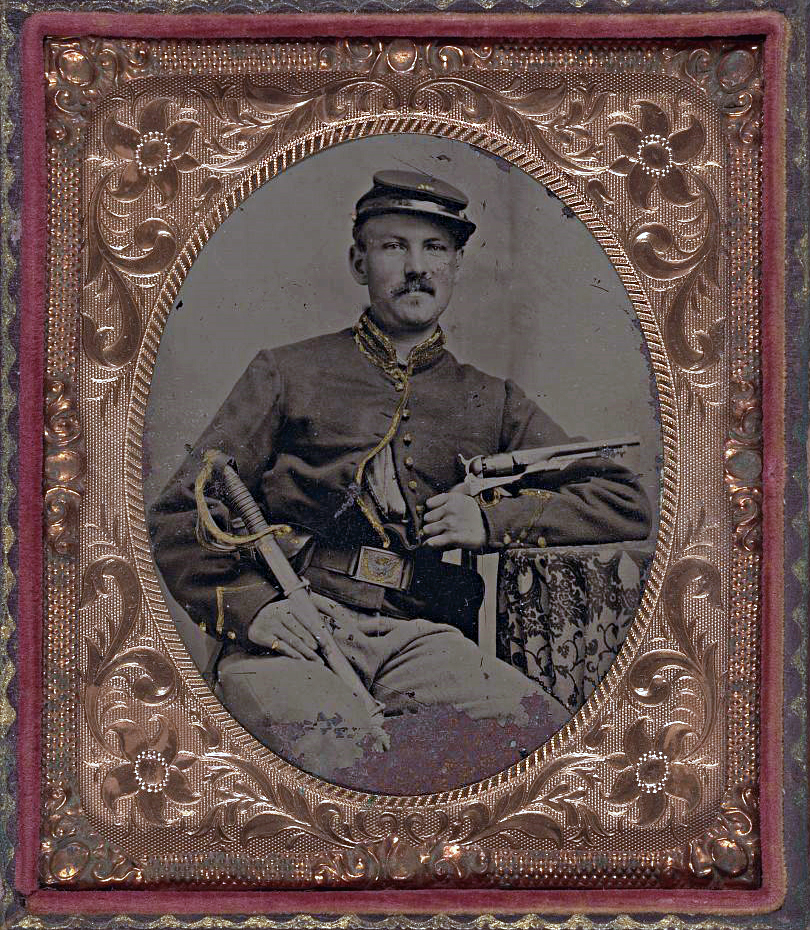 The above soldier photo is to illustrate who carried the Colt Army Revolver.  The image is not available for purchase. 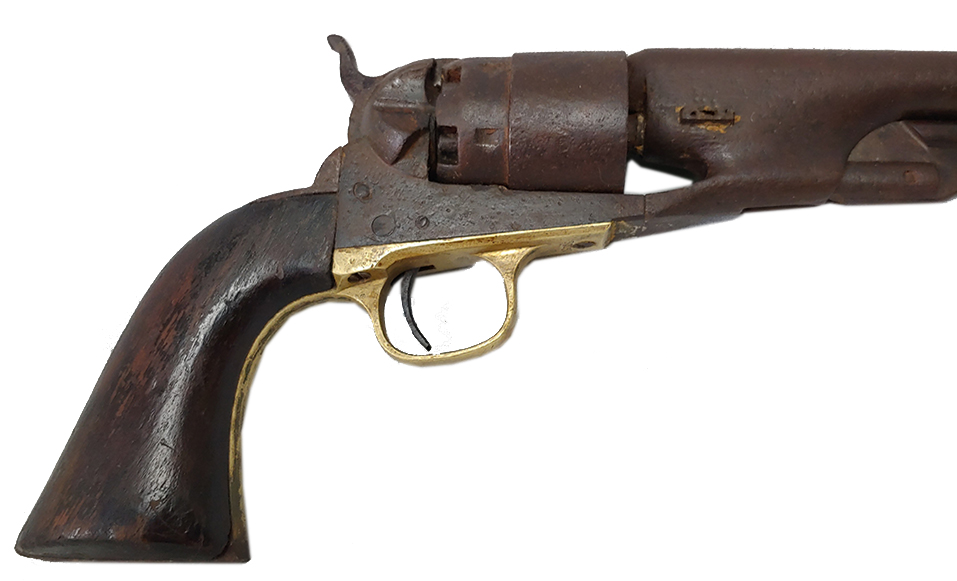 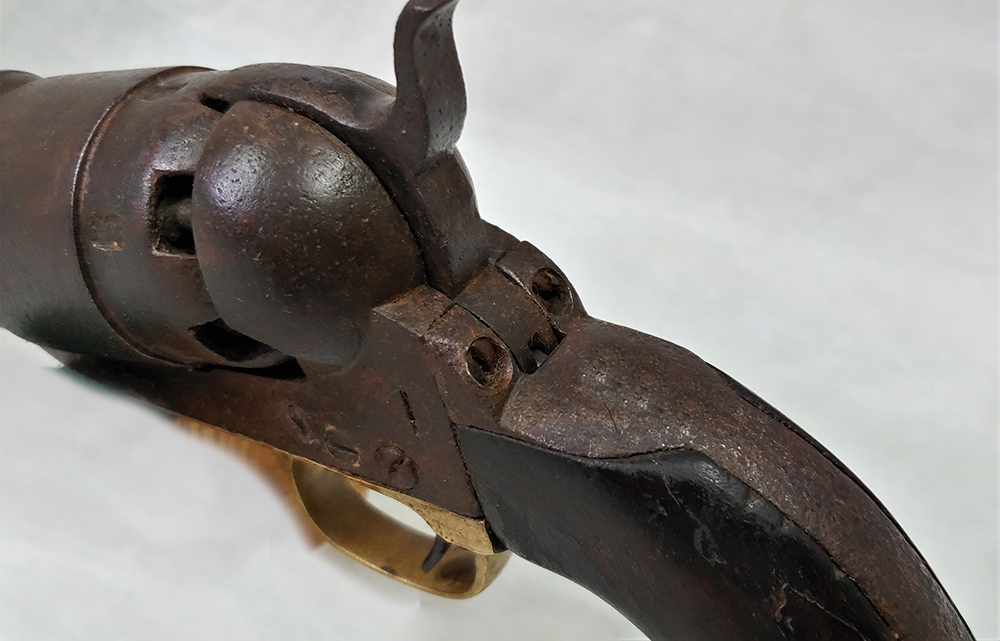 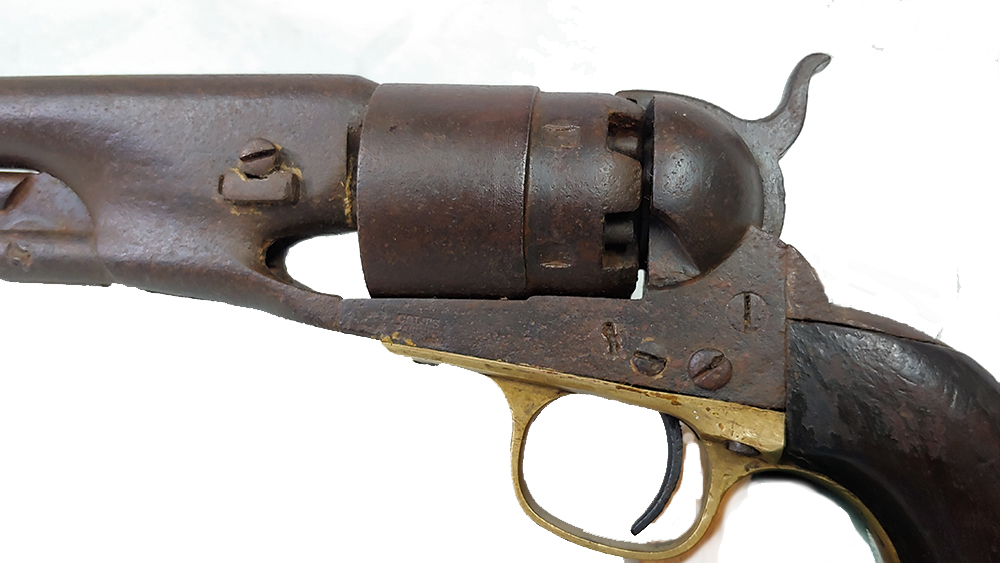 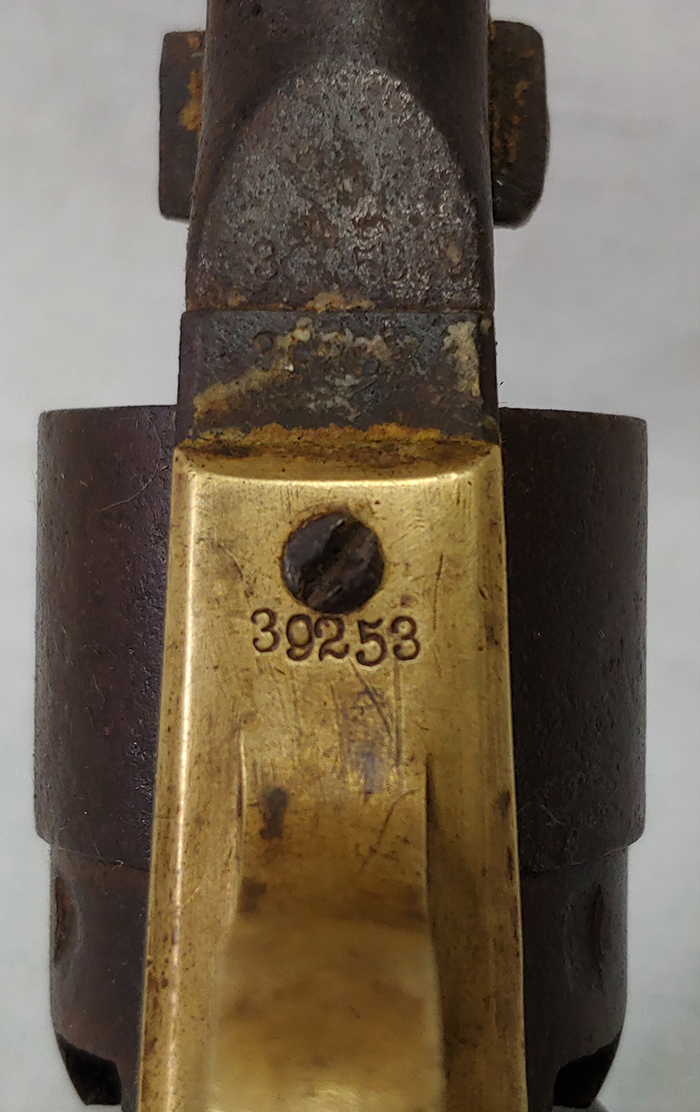